GRENOBLE, FRANCE: music software and hardware developer and manufacturer Arturia is proud to announce that its irresistible ‘Music Through The Ages’ promotional pricing campaign now includes V Collection 4 — its premium software collection of keyboards and drum machines, available to duly download for half price between December 15, 2015 until January 10, 2016… 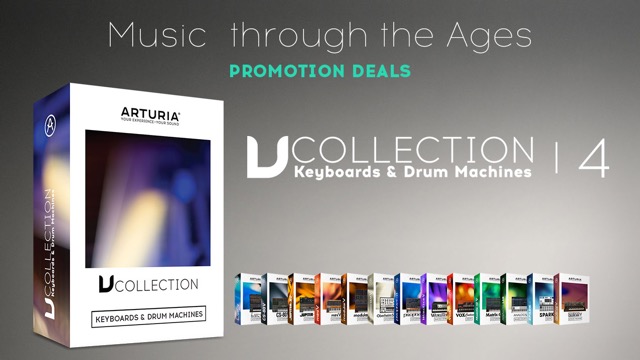 V Collection 4 comes complete with all 12 of Arturia’s award-winning Analog Classics, a range of authentic-sounding software recreations of classic analogue instruments, including the latest VOX Continental V (Sixties-vintage VOX Continental 300 combo organ), Solina V (Seventies-vintage Solina String Ensemble string machine), and Matrix-12 V (Eighties-vintage Oberheim Matrix-12 programmable analogue polysynth) additions, alongside SPARK 2, Arturia’s advanced sound-sculpting and beat performance software featuring over 188 drum kits from various classic drum machines and over 5,500 patterns ranging from hip-hop to many of the latest EDM genres. Going into greater detail, V Collection 4 reads (and sounds) like a who’s who of historic hardware through the music-making ages, including authentic-sounding software recreations of many more genuine analogue classics.  ARP 2600 V brings back to life the long-since-discontinued ARP 2600, a Seventies-vintage, semi-modular duophonic synth used to great effect at the time by the likes of Herbie Hancock and Jean-Michel Jarre, as a fully-polyphonic soft synth suited to truly versatile sound creation.  Anyone at all familiar with the trailblazing Chariots Of Fire and Bladerunner synth-scores by Greek keyboard virtuoso Vangelis will have heard the transcendent tones of the Yamaha CS-80, a super-sized, Seventies-vintage analogue performance polysynth par excellence, now available again as Arturia’s award-winning CS-80 V.  Roland’s former flagship, the lovely-looking Jupiter-8 programmable analogue polysynth, took the synth world by storm upon its (1981) release — boosting its already superlative sonic capabilities by adding an arpeggiator that helped make many mega hit singles shine forth, musically-speaking, such as Duran Duran’s ‘Save A Prayer’ and Howard Jones’ ‘New Song’ — as did Arturia’s award-winning Jupiter-8V software recreation.  Mini V brings to the desktop (or laptop) a polyphonic enhancement of an ever-present analogue monosynth that has been making its ‘phat’ presence felt for four-plus decades. Meanwhile, Modular V gives Dr. Bob Moog’s monstrous modular synth system from the Sixties a software makeover fit for 21st Century composition and recording workflow.  The original Oberheim Synthesizer Expander Module® (SEM) was originally conceived as a way of beefing up weaker-sounding compatible analogue monosynths of the time; the still-sought-after dual-oscillator-driven sound of the Seventies-vintage SEM lives on in Arturia’s award-winning Oberheim SEM V software recreation.  Prophet V faithfully brings back to life the historic and superlative sounds of the Prophet-5, the world’s first fully-programmable polysynth dating back to 1978, and also those of the 1986-vintage, California-created classic Prophet VS Digital Vector Synthesizer, Sequential’s first digital design, as well as being able to stack an astounding combination of both the Prophet-5 and Prophet VS as an all-new Prophet hybrid!  Wurlitzer-V reproduces the agreeable acoustic properties of the well-known Wurlitzer 200 EP electric piano’s distinctive reeds, key action, and amplification characteristics that became a staple sound of the Seventies, while also adding all manner of effects into the thoroughly modern mix.  Moreover, V Collection 4 definitely delivers when it comes to providing instant inspiration to those discerning composers, DJs, keyboardists, musicians, performers, producers, or sound designers demanding superior-quality software instruments. It also comes complete with Arturia’s acclaimed Analog Lab, an abundantly-powerful software synthesizer solution with 6,000-plus presets by internationally-renowned sound designers derived from Arturia’s award-winning range of Analog Classics — more than enough to get going with musically before digging deeper into those highly-programmable 12 authentic-sounding software recreations!  Thanks to this welcome addition to the ‘Music Through The Ages’ promotional pricing campaign, V Collection 4 can be purchased and downloaded for only €199.00 EUR/$199.00 USD! Best be quick, though. For on January 11, 2016, the V Collection 4 download will be back where it belongs… at its regular price of €399.00 EUR/$399.00 USD.

Between December 15, 2015 and January 10, 2016, Arturia’s award-winning V Collection 4 can be purchased and directly downloaded for only €199.00 EUR/$199.00 USD from Arturia here: http://www.arturia.com/vcmusicthroughtheages

Returning customers who have previously bought and registered an Arturia product are advised to check their MY ARTURIA account for a personally-priced V Collection 4 offer.