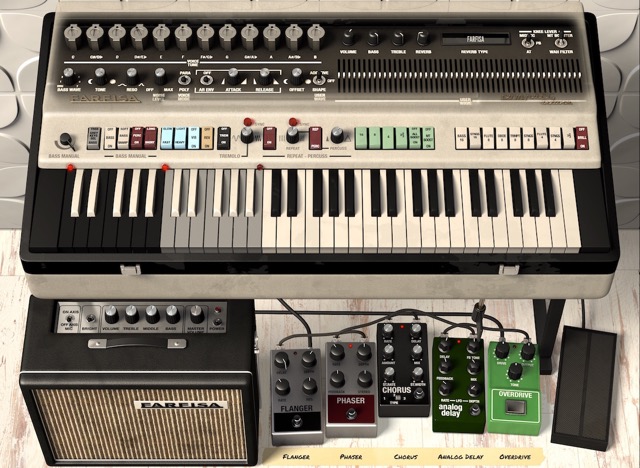 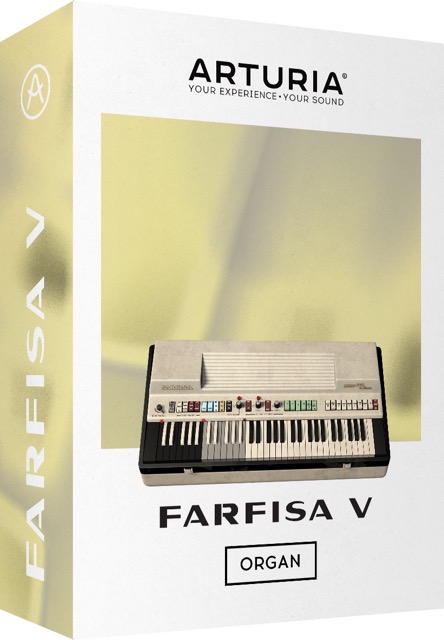 Arturia’s award-winning Analog Classics family of virtual instruments recreate hard-to-source synthesizers and classic keyboards. As a worthy addition, Farfisa V virtually puts players of today in the musical driving seat with a still-sought-after sound that drove the hits of several decades: Farfisa’s famous Compact Deluxe electronic organ, one of a series of iconic instruments manufactured in Italy between 1964-1968. A staple of Sixties-produced popular music, they made their musical mark with a wider-ranging sound than that of their main VOX Continental competitor. With more bass waveforms and an expanded percussion and vibrato section sales soared.  Speaking sonically, Farfisa Compacts are almost more top octave synth-like than organ-like, thanks to a rudimentary envelope that allows for attack and decay control that went way beyond the typical organ sound of its day. Little wonder, then, that they proved popular with musicians throughout the Sixties (‘Sam The Sham’ and The Pharaohs, Percy Sledge), Seventies (Jean-Michel Jarre, Kraftwerk), Eighties (B-52s, Blondie), and beyond. But unlike heavyweight Hammond tonewheel organs, transportation to performances was trouble-free. For the  fortuitous Farfisa form factor included integrated legs that could be folded up and stored within the body of the instrument itself, surely sealing many purchasing deals!  Today, though, finding and maintaining an original Farfisa has become both difficult and costly. Farfisa V solves such problems by bringing all the benefits without any of the hassles to the present-day desktop! Developed using an original hardware organ for reference, it meticulously models the original circuits and sounds of the famous Farfisa Compact Deluxe. Features from its Duo Compact series sibling are also included alongside an authentic combo amp simulation. Standalone instrument operation on Mac OS X and Windows is a given for performance purposes. Plug-in support for all major formats inside any DAW (Digital Audio Workstation) with easy MIDI-learn functionality provides hands-on control of many of its parameters and automation support for considerable creative control. Naturally, Native Instruments’ new NKS® (NATIVE KONTROL STANDARD) — allowing advanced integration with third-party software instruments — is there for the taking.  As always, recreating an instrument in software provided an opportunity to add a number of more advanced features fit for the 21st Century. Cue the special USER WAVE position, allowing anyone to create an additive waveform. Why not use the ToneDraw feature to create a new waveshape based on the graphical look of the sliders? Having modelled the original built-in spring reverb, Arturia added other reverb IRs (Impulse Responses). Reorder the additional ANALOG DELAY, CHORUS, FLANGER, OVERDRIVE, and PHASER effects. Easily-accessible individual voice tuning, PARA (paraphonic) and POLY (polyphonic) modes, ATTACK and RELEASE envelopes for upper and lower keyboards, BASS WAVE (waveform selector), TONE control for bass section, TREMOLO SYNC, and REPEAT SYNC round out this all-new Analog Classic. Hearing is believing. So is seeing, thanks to the resizable (Retina/4K-compatible) GUI (Graphical User Interface) that’s as easy on the eye as it is to use.  Ultimately, then, whether you’re set on recreating a distinctive and powerful organ sound of the past or forging ahead with a new organ sound of the future, Farfisa V does it all. But best of all… legs no longer play a part in sealing this must-have musical deal!

The AAX-, AU-, VST2-, and VST3-compatible Farfisa V is available to purchase as a boxed version from any authorised Arturia dealer or online as a download directly from Arturia for €199.00 EUR/$199.00 USD here: https://www.arturia.com/products/farfisa-v/buy

Farfisa V is included in Arturia’s simultaneously-available V Collection 5 bundle of 17 legendary keyboards (plus Analog Lab 2), available to purchase as a boxed version from any authorised Arturia dealer or online as a boxed version or download directly from Arturia for an introductory promotional price of €399.00 EUR/$399.00 USD — rising thereafter to €499.00 EUR/$499.00 USD — here: https://www.arturia.com/products/v-collection/buy (Existing Arturia customers additionally benefit from preferential pricing according to the number of qualifying products that they already own.)