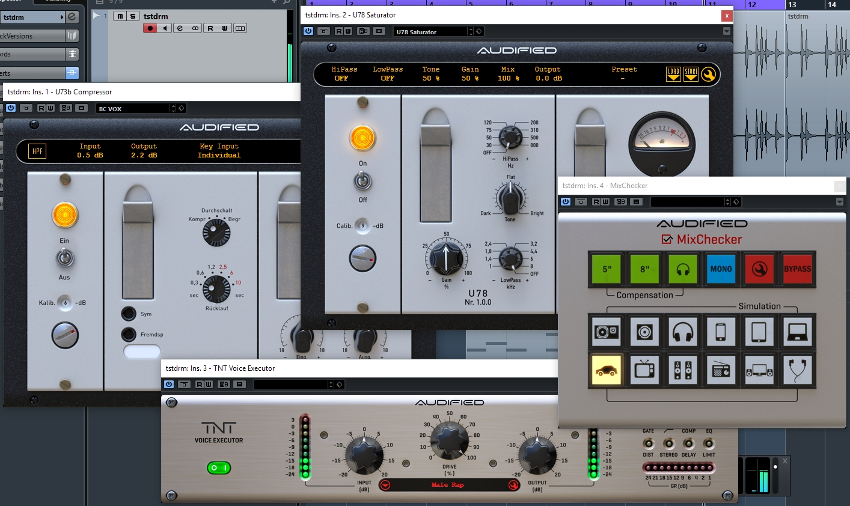 Fresh out of Audified’s software starting gate (as of August 2017) is RZ062 Equalizer, a plug-in bundle based around authentic namesake models of the now-scarce and sought-after, Sixties-vintage Klangfilm RZ062a and RZ062b valve EQ modules made by German giant Siemens for installation in its film sound-centric Universal Mixing and Control Console (Klangfilm System), served up as AU-, AAX-, and VST-compatible RZ062A and RZ062B plug-ins that simply sound as stunning as they look when mixing and mastering with suitable DAWs (Digital Audio Workstations) worldwide. While normally retailing with an MSRP of $199.00 USD, now it is possible to get it directly from Audified at a 20% discount — priced to tempt at $159.00 USD.
Audified’s U78 Saturator — saturation effects plug-in par excellence, utilising meticulous models of the amazing-sounding analogue circuitry central to the U73b, the treasured Sixties-vintage German broadcast compressor/limiter that found favour in European mastering circles well into the Eighties and beyond, but supplementing the tube saturation circuitry with high-pass and lowpass filters and a unique tone filter for some seriously satisfying saturation — first saw the light of day in December 2016, but benefits from an even bigger ‘Black Friday’ price reduction, temporarily weighing in at an attractive $59.00 USD. That’s a stupendous 60% off its regular MSRP of $149.00!
Speaking of U78 Saturator, Audified is all set to lead anyone interested further into temptation with Studio Bundle — an already attractively-priced plug-in bundle of its ‘latest and greatest’ (TNT Voice Executor, second-generation U73b Compressor, U78 Saturator, and MixChecker) hit releases, rendered as appealing to the eye as they are to the ear for a wide range of production purposes, priced at $225.00 USD instead of its regular MSRP of $449.00 USD. A 50%-discounted bargain if ever there was one — all the more so since buying the bundled software titles individually would normally cost $516.00 USD!
Last but by no means least — and arguably saving the biggest bargain until last… Live Guitar and Bass Bundle. As implied by name, this special set of applications and plug-ins contains everything anyone might possibly need to play and record guitar or bass — not forgetting keys and vocals, valued at $276.00 USD when purchased individually. Includes ampLion Pro (precise simulation of nine guitar preamps, seven power amps, 12 speakers, eight microphones, and 30 effects to deliver a wide variety of unique guitar sounds); GK Amplification 2 Pro (plug-in and a standalone application including exact models of three Gallien-Krueger bass amps and several speakers); inTone2 (multifaceted multichannel effects processor, software mixing console, virtual instruments host, and flexible multitrack zonal player); and Pedals (complete set of virtual stomp-box effects in one package) — priced for ‘Black Friday’ at $59.00 USD, representing an attractive 60% discount against its regular MSRP of $149.00 USD.

RZ062 Equalizer, U78 Saturator, Studio Bundle, and Live Guitar and Bass Bundle are all available to purchase from Audified’s online shop (https://shop.audified.com/products) at their respective discounted ‘Black Friday’ promo pricing between November 20 and 28, 2017, following which they will all return to their respective MSRPs.