Martin
Summer NAMM 2019 – July 18th, 2019, Little Ferry, NJ – Eventide Audio is proud to release three new iOS music creation and live performance effects apps from their legendary catalogue of studio hardware and software: Blackhole Reverb, UltraTap Delay, and MicroPitchTM for iPhone® and iPad®. Blackhole Reverb, a reverberation effect for sound design and creating out-of-this-world ambiance on instruments and vocals, is available for just $19.99. UltraTap Delay, a rhythmic audio effect for stylistic glitchy delays on drums, pads, vocals and guitars is now available for just $14.99. MicroPitch, a pitch-shifter capable of deep pitch dives, slap-backs, and unparalleled detuned delays, is available for just $9.99.
Eventide’s Blackhole Reverb, UltraTap Delay and MicroPitch are all available now as standalone apps and as AUv3 plugins for use in popular iOS DAWs, ready for download from the App Store®.
“Entering into the iOS music creation ecosystem is an exciting new horizon for Eventide! Beginning years ago with our ‘Factor’ series of guitar pedals, our mission has been to put studio-quality performance effects within the grasp of all artists. A decade ago audio production techniques evolved from the exclusive world of the recording studio and expensive consoles to working ‘in the box‘. Eventide is now focused on partnering with Apple to help take the next step – moving music creation and audio production from ‘in the box’ to ‘in the hand.’ We also believe that each effect should be a ‘playable’ instrument in its own right and so we’ve developed our innovative ‘Ribbon’ to unleash a new level of instant creative control. Our first three releases for iPhone and iPad – Blackhole Reverb, UltraTap Delay and MicroPitch – offer just that, playable effects and sound design tools for mobile musicians and producers, in every genre, from beginner to professional.”
~ Richard Factor, Eventide Founder
Blackhole Reverb 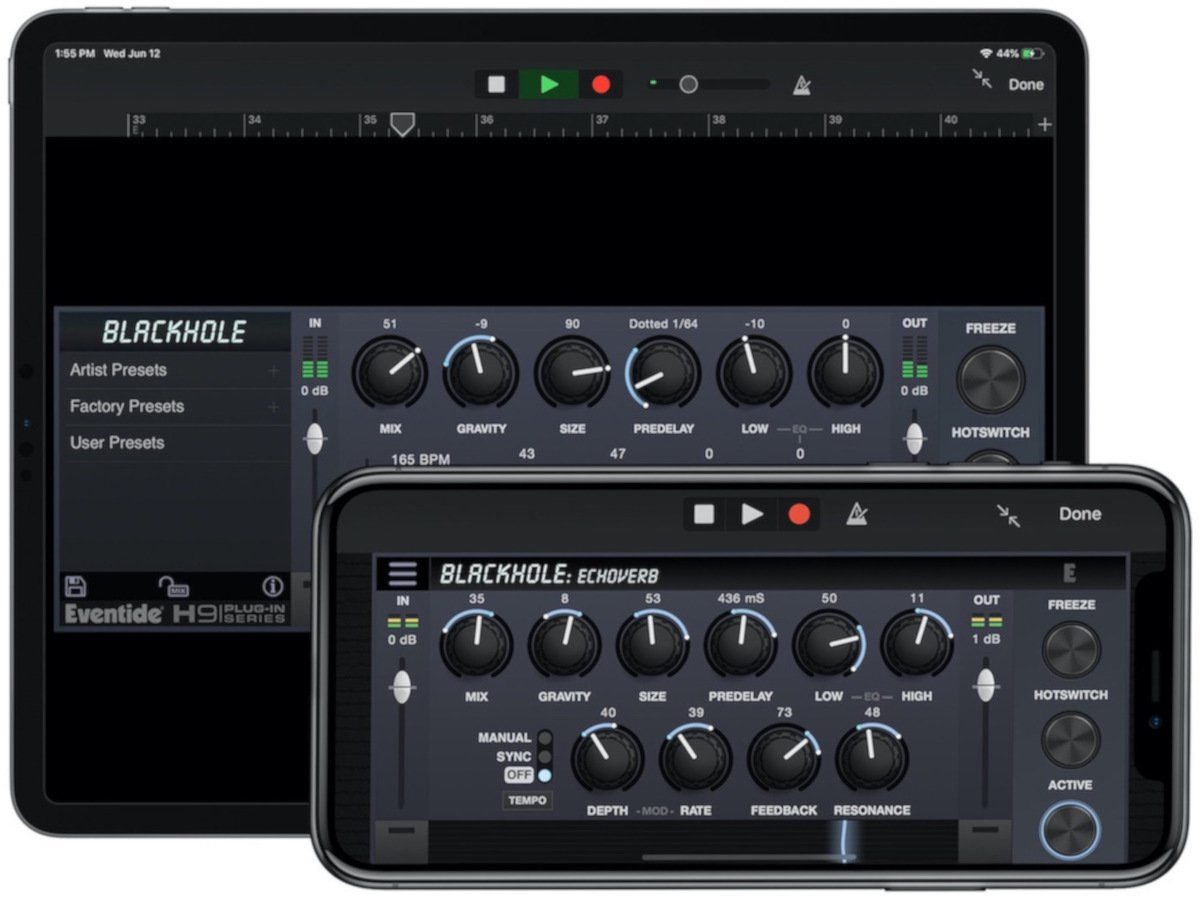 Blackhole Reverb, a reverb effect as big as the cosmos, is poised to create out-of- this-world ambiance for iPhone and iPad.
Derived from the original hardware versions of Eventide’s flagship studio processors and the popular “Space” pedal, the original Blackhole Reverb was created as „an abnormally large reverb, sucking everything into a bottomless chamber.” Later in the Mac/PC plug-in version, the Ribbon and Hotswitch meta-controls enabled musicians to musically manipulate multiple parameters in real time for enhanced playability. Blackhole Reverb’s remarkable otherworldly sound designs have been used on hundreds of recordings and in sci-fi films. For example, in Prometheus it created the large cavernous soundscapes that evoked eerie, unsettling sensations. Skywalker Sound has used it on numerous film productions and it can be heard throughout Blade Runner 2049’s soundtrack enhancing the film’s disturbing atmosphere.

Blackhole Reverb for iOS breaks the rules by allowing musicians, producers and sound designers for film and game audio to create virtual spaces on their iPhone and iPad that could never exist in reality. At large sizes, Blackhole Reverb’s soft attack and lingering, harmonic tails allow it to shine on guitars, strings, vocals and pads. At small sizes, those very same qualities can add an angelic sheen to vocals or turn a simple drum track into an otherworldly rhythm section.

Features:
– Incredibly easy-to-use with over 50 presets; many created by Eventide artists, such as Black Violin, Vernon Reid, John Agnello, Jakob Haq, MIKNNA, and many more.
– Ability to create extremely musical effects useful for highlighting key instruments
– Supernatural settings for abstract spatial effects and drones
– Subtle settings for ambient washes and track highlighting
– Unique “Gravity” control reverses the arrow of time by inverting the reverb’s decay
– Innovative Ribbon and Hotswitch allow for ‘playing’ the effect by changing any combination of parameters seamlessly and simultaneously
– Fully flexible mono and stereo options bring new realms of stereo imaging to mono instruments
– Use “Mix Lock” to scroll through presets while keeping the wet-dry mix constant
– Available as an Audio Units AUv3 plug-in, Inter-App Audio, and as a standalone app for iPhone / iPad
UltraTap Delay is an audio effect for rhythmic delays, great for reverbs, huge volume swells and modulation 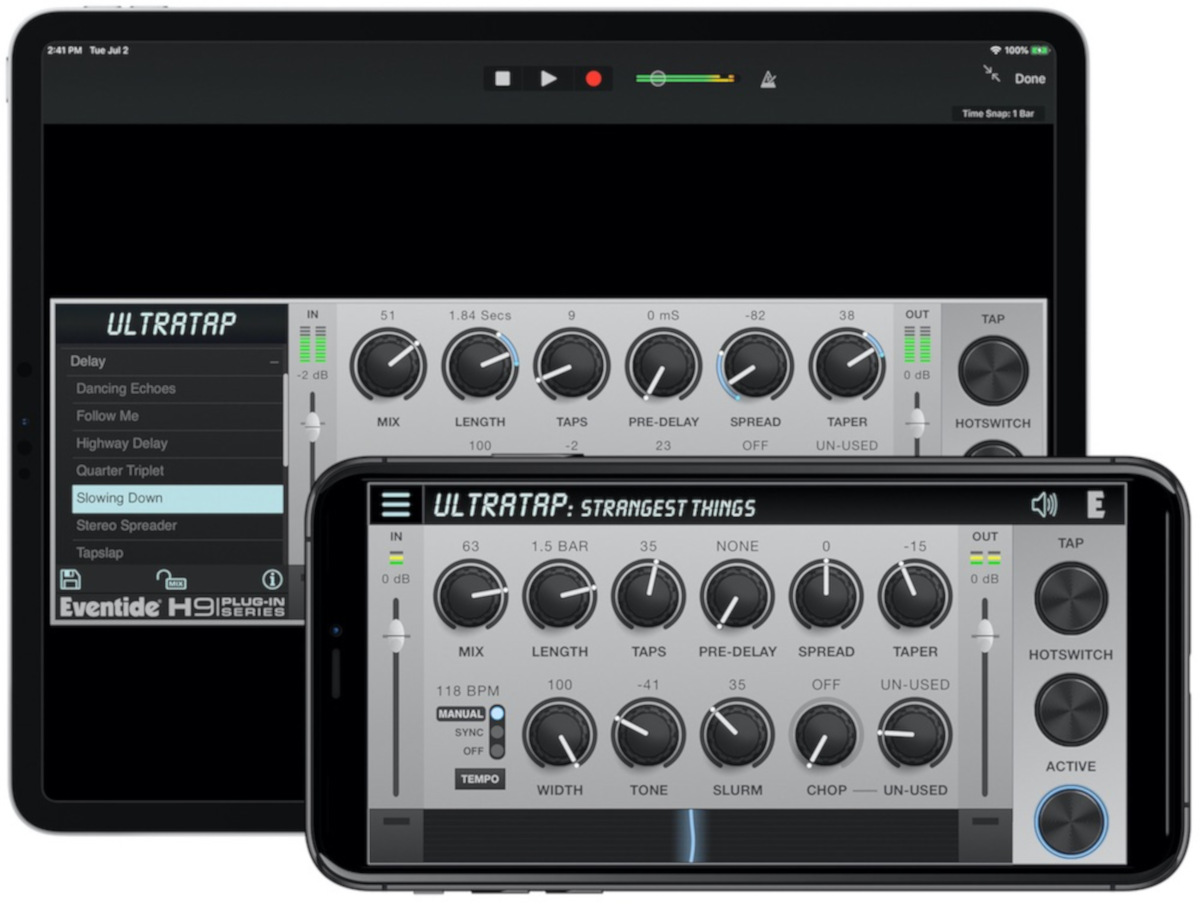 With origins in the studio classic H3000, UltraTap Delay for iPhone and iPad is a versatile, multi-tap delay effect capable of rhythmic delays, glitchy reverbs, wacky comb-filtering and huge pad-like volume swells by employing extraordinary and innovative modulation techniques. Creative controls like „Slurm“ for juicy tap slurring, glitched auto-volume chopping and enormous swell features for breakbeats or atmospheric rises make it the perfect tool for creating drum fills, vocal choruses, swelling guitar chords and other evolving effects. UltraTap for iOS can create everything from reversed reverbs to a massed church choir singing a Gregorian chant in a cathedral! With playable Ribbon and Hotswitch meta-controls, it’s a must-have for sound designers, DJs, EDM, Trap, Hip-Hop producers and musicians for creating, enhancing and performing music.
Features:
– Up to 64 taps to create simple repeats or morph delays into choruses and reverbs
– Speed up or slow down the rhythmic spacing between taps using the Spread knob
– LFOs and envelopes to chop sound sources into stuttered rhythms
– „Slurm“, an innovative parameter, to smear taps together or modulate them to create truly unique reverbs and ‘mushy’ stutter effects
– Stereo image control of taps to alternate between hard-panned and mono
– Over 150 presets designed to inspire, including artist presets by Chris Carter, Colin Newman, Sasha, Jakob Haq and many more
– Innovative Ribbon and Hotswitch allow for ‘playing’ the effect by changing any combination of parameters seamlessly and simultaneously
– Use “Mix Lock” to scroll through presets while keeping the wet-dry mix constant
– Available as an Audio Units AUv3 plug-in, Inter-App Audio, and as a standalone app for iPhone / iPad
MicroPitch is a fine-resolution pitch shifter for subtle tone fattening, with delays for interesting slap back effects, chorusing, depth creation and more 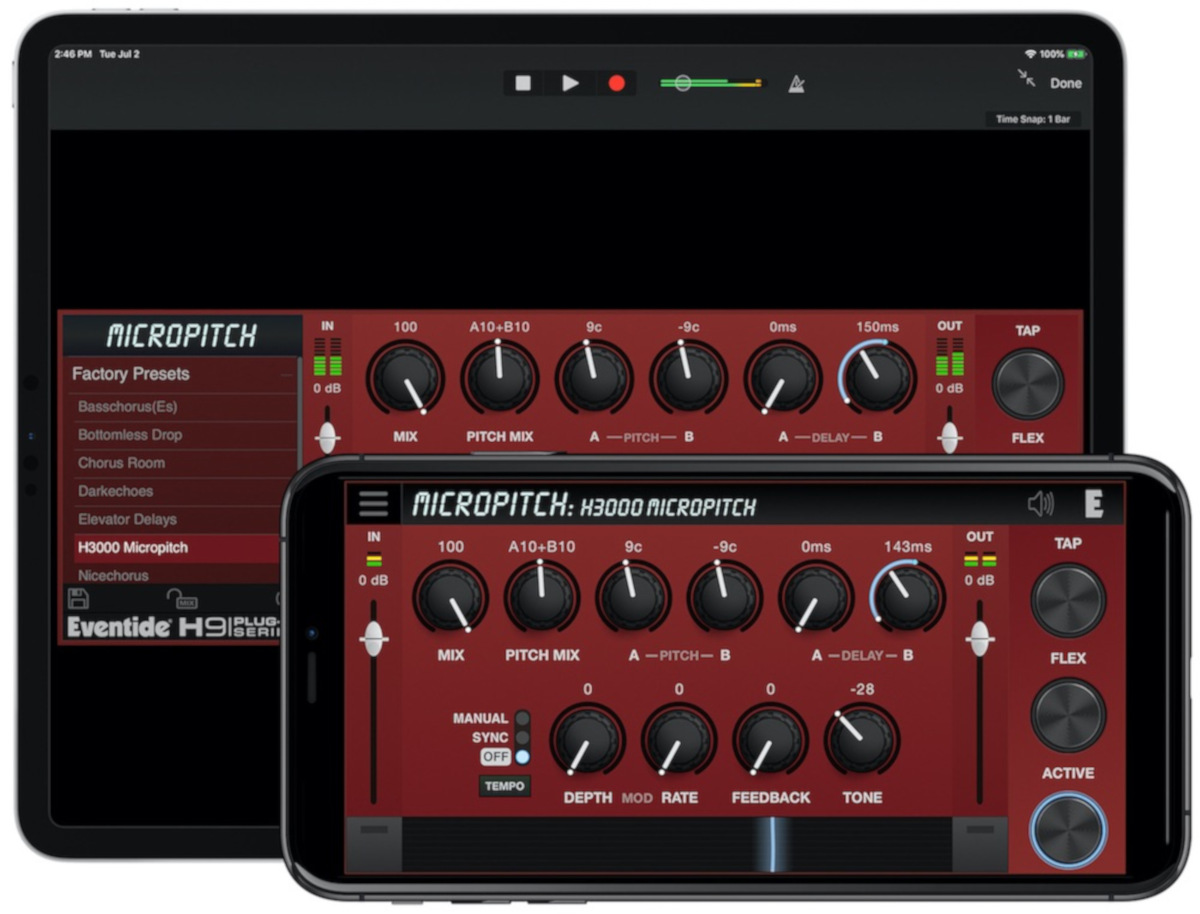 MicroPitch is one of the effects that put Eventide on the map – with origins in Eventide’s legendary studio hardware – the H3000, H949 and H910 Harmonizer®. MicroPitch for iOS allows musicians to mix in detuned and delayed versions of a signal. It creates depth and dimensions, with expanded controls for deep pitch dives, haunting echoes, and pristine chorusing effects. MicroPitch’s included playable Ribbon and meta- controls make it the perfect companion app for live performance, or as a plug-in with popular iOS DAWs for use in the studio.