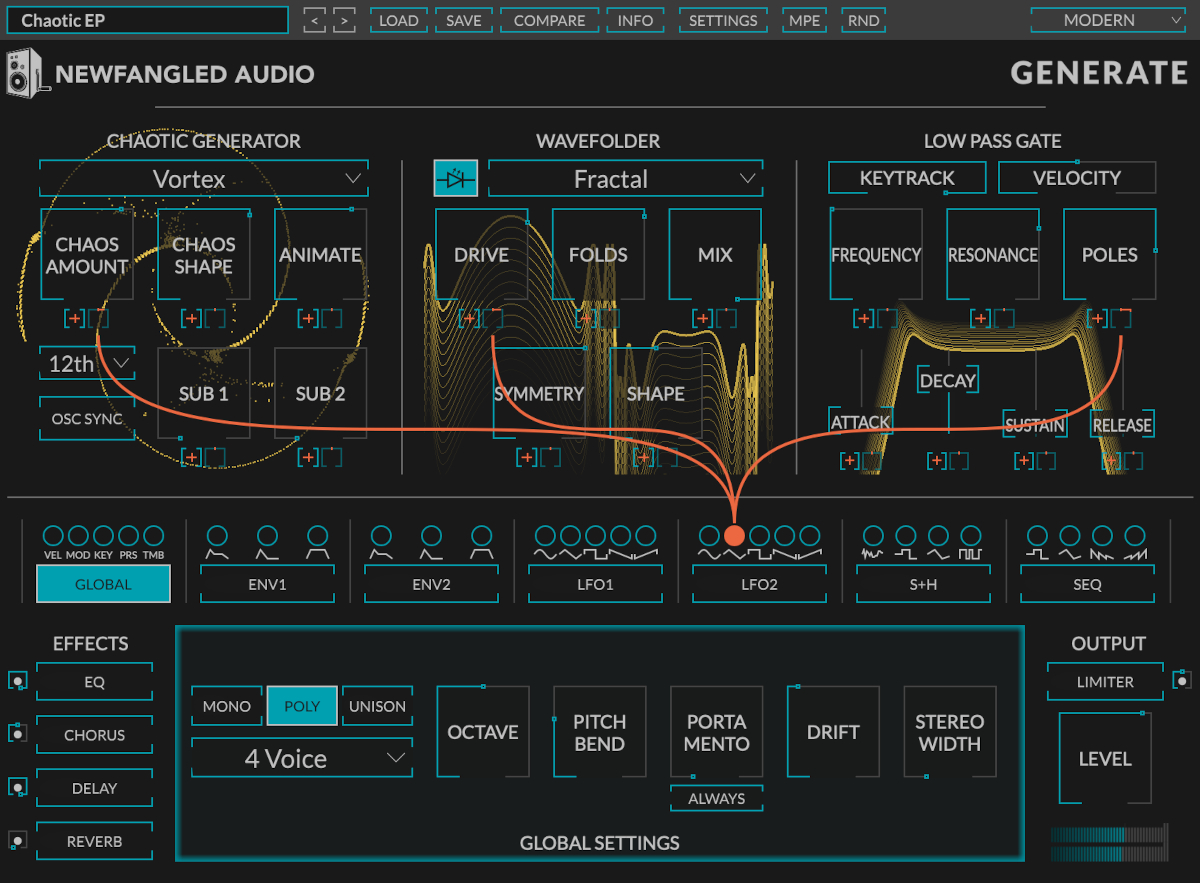 With Generate, what initially looks like randomness contains underlying patterns, interconnectedness, constant feedback loops, repetition, self-similarity, fractals, and self- organization. Each of Generate’s five chaotic generators brings out these underlying patterns to create an oscillator that can smoothly fade from a sine wave to total chaos, with an expanse of territory to explore in between. The musical textures created include distortion, harmonics, grunge, static, and noise – all of which can be predictably or unpredictably modulated.
Generate’s chaotic generators are routed through a Buchla 259 Complex Waveform Generator wavefolder, or novel Animated or Fractal wavefolders, each adding unique overtones. The signal chain includes a low pass gate inspired by the ideas of legendary synthesizer designer Don Buchla with added controls for POLES and RESONANCE. These modules combine to give Generate a versatile and musical voice with its own unique flavor.
Every parameter in Generate’s voice can be modulated by a combination of two Envelope Generators, two LFOs, a Sample and Hold/Random generator, an 8-step Sequencer, and MIDI and MPE sources, the latter allowing amazing control from expressive controllers. With up to 493 simultaneous modulation routings from its main page, the innovative modulation user interface allows users to easily and quickly patch any combination of sources to any destination, creating sounds that move, and which move listeners. All modulation sources have multiple outputs generated at once, as a modular synth should, and every mod output being tied to every control delivers up to 493 modulation routes in an intuitive single pane. The Double Pendulum, Wavefolder, and Low Pass Gate modules each have animations to show how each module responds to input, and to modulation.
The Generate radical chaotic oscillator has five types: Double Pendulum, Vortex, Pulsar, Discharge, and Turbine. Generate’s voice is followed by unparalleled EQ, Chorus, Delay, Reverb, and Limiter effects, all combining to launch chaotic sounds into outer space or right into listener’s faces. Over 450 Presets, including sounds developed by renowned artists, provide a launch point for creative experimentation while three unique color schemes let users customize Generate’s look.
Newfangled Audio’s Generate requires an iLok account, but no dongle is necessary. For macOS 10.9+, Pendulate is compatible with 64-bit AAX, AU, VST2 and VST3 protocols. For Windows 8.1+, Generate is 64-bit AAX, VST2 and VST3 compatible. Generate is available immediately at an introductory price of $99 (regular price $149). Crossgrade pricing for owners of the Elevate Bundle is $69 and $79 for owners of other Newfangled Plugins.
To learn more, visit https://etide.io/generate.
Generate demonstration videos can be viewed at https://etide.io/generate-videos.