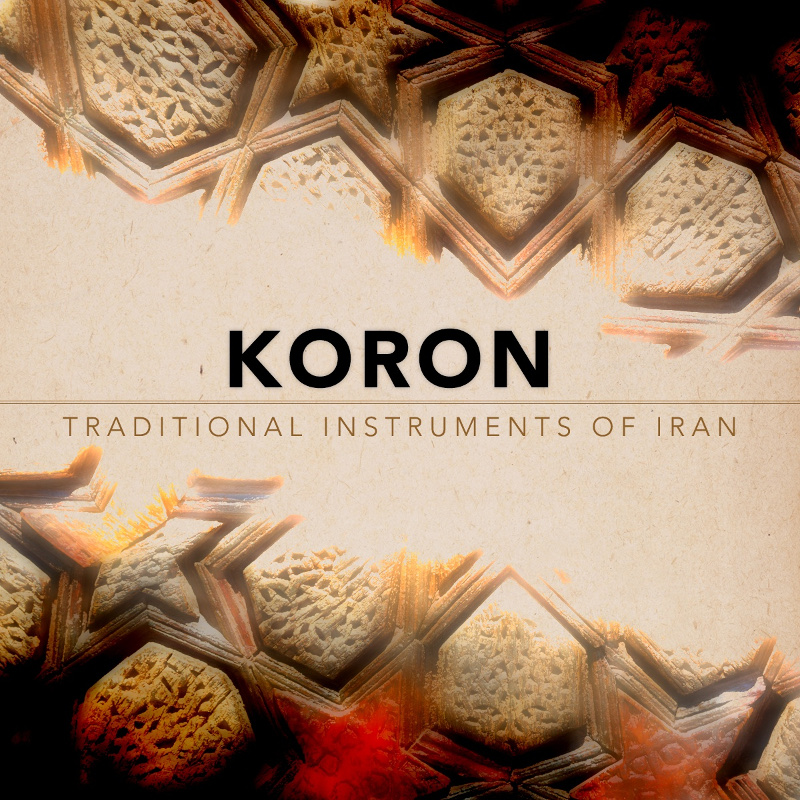 Koron is a traditional Iranian term that refers to notes that are a quarter-step lower in pitch. Put it this way: such quarter tone intervals are a distinguishing feature of Iranian and other traditional Middle Eastern music, and, as such, Impact Soundworks sensitively pays tribute to that concept — both in name and content — with KORON – TRADITIONAL INSTRUMENTS OF IRAN. Indeed, it is designed to capture the very essence of Iran’s rich tapestry of musical forms and history, while also breaking down barriers between Eastern and Western music.  Musically speaking, KORON – TRADITIONAL INSTRUMENTS OF IRAN in effect started life at the instigation of one Siavash Mozaffari, an Oakland, CA-based multi-instrumentalist, recording artist, engineer, and sound enthusiast, who successfully used crowdfunding to raise  funds for a ‘sonic journey’ to Iran with the goal of sharing the sounds of that country’s traditional instruments by transforming them into virtual tools to be used by any composer. Connecting with the instigator, Impact Soundworks expanded the scope and depth of this project, producing one of the deepest world instrument libraries ever released as a collaborative result over two years later.  The finished result almost beggars belief. With over 17,000 superlative samples presented in 24-bit fidelity to its notable name, KORON – TRADITIONAL INSTRUMENTS OF IRAN includes five melodic instruments — including kamanche (believed to be one of the historical ancestors of the European violin family), santoor (type of hammered dulcimer), setar (three-stringed instrument with a long neck and moveable frets), tanbour (considered by some to be the first long-necked fretted instrument), and tar (amongst the most significant Iranian classical instruments, similar in importance to the guitar in Western music) — and five percussive instruments — including bendir (wooden frame drum with a skin membrane), daf (larger Persian frame drum made of hardwood with metal strings attached), kuzeh (hollow clay instrument indigenous to Iran with holes that can be opened or closed by hand to create unique sound effects), tombak (goblet-shaped hand drum that is a foundational instrument to Persian music), and zarbe zoorkhaneh (clay and sheepskin or goatskin hand drum originally used in BC-era fitness workouts for knights).  With KORON – TRADITIONAL INSTRUMENTS OF IRAN, Impact Soundworks proudly presents both deep multi-samples — including multiple dynamics, round robins, and legato transitions — alongside extensive percussive hits and techniques, plus over 1,200 performances and phrases. Pool of staggering samples notwithstanding, Impact Soundworks also designed KONTAKT patches using its latest scripting techniques, such as TACT (Total Articulation Control Technology) for custom mapping and phrase editing directly within KONTAKT. In close collaboration with Siavash Mozaffari, information and images pertaining to every instrument recorded reside within KORON – TRADITIONAL INSTRUMENTS OF IRAN itself, so inquisitive users can learn more about their construction, history, and playing style.  Stylistically, KORON – TRADITIONAL INSTRUMENTS OF IRAN of course can creatively go beyond time and place, partly thanks to the onboard effects rack featuring (an analogue-modelled parametric) EQ, COMPRESSOR, DELAY (line), and (convolution) REVERB. Realistically, though, given that one of the core goals at Impact Soundworks is to sample and develop virtual instruments outside the standard Western repertoire, KORON – TRADITIONAL INSTRUMENTS OF IRAN is the most extensive fulfilment of that goal yet and also a fitting conclusion to Siavash Mozaffari’s Iranian ‘sonic journey’ having helped him expand the scope and deliver the project to its full potential.
KORON – TRADITIONAL SOUNDS OF IRAN can be purchased and digitally downloaded (as a 11 GB library totalling 17,000-plus 24-bit samples) directly from Impact Soundworks for a time-limited introductory promo price of $179.00 USD until March 31, 2017 — rising to an MSRP of $199.00 USD thereafter — from here: https://impactsoundworks.com/product/koron-traditional-instruments-of-iran#purchase