Our flagship grand piano instrument features a beautifully-recorded Yamaha C7 with four microphone perspectives, each offering a unique and lush sound. Pearl is a true joy to play, edited and mixed to perfection and suitable for most any style of composition – classical pieces, cinematic works, pop, jazz, blues, and more. Pearl makes an excellent addition to any sample collection. If you’re like us, you’ll find yourself reaching for it every time. 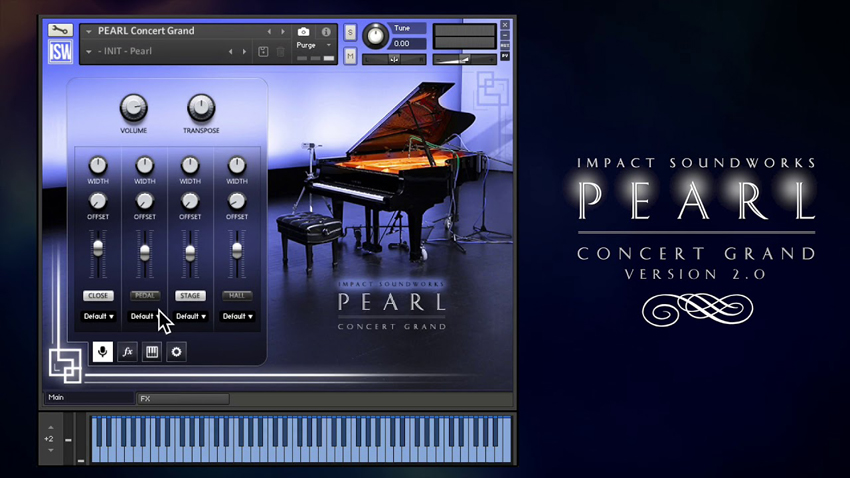 Based on years of customer feedback, we released version 2.0 of Pearl in September 2018. This version is a total rewrite of the playback and performance engine of Pearl without changing the lovely recordings. Users of v1 will find the interface mostly familiar, but editing capabilities, pedal realism, and noise have all been greatly improved.

We recommend reading the updated manual even if you’re familiar with the original release!

When we first played this magnificent grand piano in its concert hall, we fell in love. We decided we simply had to capture it and craft a timeless virtual instrument – and that’s exactly what we did. The beautiful tone of Pearl, captured through each of the four microphone positions, truly ’sings‘ with each key press. The default tuning, velocity curve, and mixing settings are all set to inspire your compositions and musical creativity.

A powerful yet unencumbered user interface provides very easy control over all aspects of the sound, such as mic mixing, channel EQ, tuning, and velocity response. By simply adjusting the mic mix alone, you can achieve drastically different timbres.

We know that as soon as you load Pearl and beginning playing, you will have the same reaction we did when we played this piano for the first time.

The interface of Pearl is every bit as elegant and beautiful as the piano itself. On the main page (pictured below), each microphone can be effortlessly mixed, with per-channel EQ, stereo width, compression, and optional routing to different KONTAKT outputs. The settings page offers fine control over „under-the-hood“ controls such as volume envelope, velocity response, tuning (and microtuning), and noise volume.

With an assortment of presets included, customizing Pearl for your DAW or MIDI controller couldn’t be easier!