BERKELEY, CA, USA: having successfully smashed its Kickstarter campaign goal several times over to help bring the thrilling project to life, innovative hardware and software developer Keith McMillen Instruments is proud to announce availability of the production version of BopPad — broadening the company’s considerable product appeal as a smart sensor electronic drum pad controller like no other with an appealing price point to match — as of September 26, 2017… 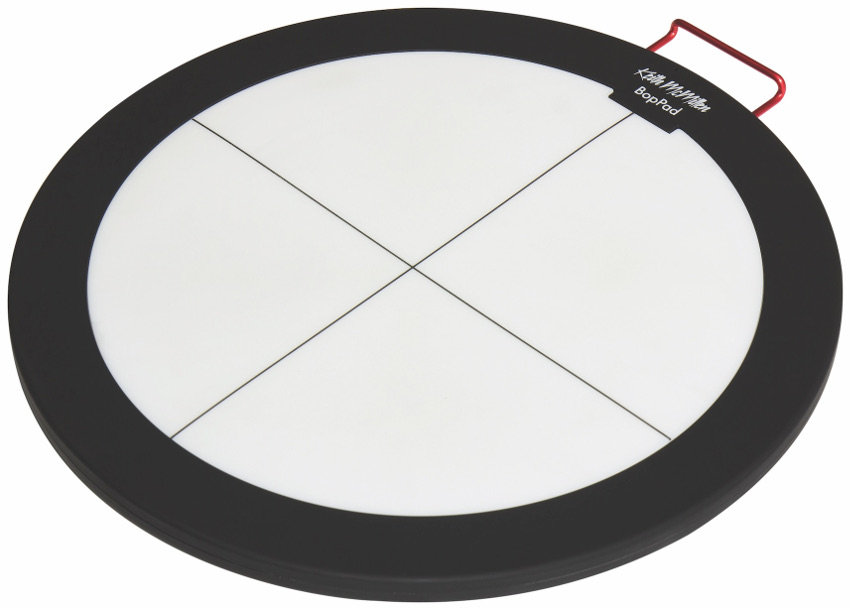 BopPad is a USB (Universal Serial Bus) powered expressive electronic pad controller for drummers, percussionists, and producers alike. As such, it advances accurate hit detection via velocity, continuous radius, and pressure sensitivity with a fast playing surface to die for. Faster than you can shake a stick at? Absolutely — as attested to by its incredible latency of under 3ms! BopPad’s advanced architecture allows for an
innovative instrument that ‘sees’ every gesture, hit, or tap to truly respond to the nuances of any percussive performance, perfectly measuring
strike velocity from the softest hand-drumming actions to the most brutal percussive assault.
At its core is a robust tuned elastomer surface covering a 10-inch circle of Keith McMillen Instruments’ patented Smart Fabric Sensor
technology. Independently programmable Quadrants — helpfully highlighted by clearly visible guide lines on the production version — output
MIDI (Musical Instrument Digital Interface) notes, velocity, pitch bend, pressure, and location CCs (Control Changes). Creatively, this serves to
provide performers with a traditional feel and adds a dimension of expressivity, enabled further by BopPad Editor. Available as a desktop
download and a web-based editor that uses new Web MIDI API technology to create and save presets from the browser, this allows each of
those simultaneously-playable Quadrants to be assigned to play up to six simultaneous notes with six expressive timbre maps, meaning that
BopPad can not only be played like a traditional drum by triggering a single sound from its entire surface but building out a drum kit by
assigning a different sound to each of those Quadrants so that a single BopPad can comfortably handle several simultaneous percussive
goals. Get this, though: smoothly varying radial sensing from centre to edge along with continuous pressure response can be mapped to any
parameter, allowing for both traditional and experimental playing styles like no other! Once a preset has been saved to the BopPad there is no
need to run the BopPad Editor software while using it.
It is easy to get started; simply plug and play via USB with any mobile device, laptop, or desktop computer. Critically, as a classcompliant
MIDI device, BopPad works with all music software. Speaking of which, with the production version of BopPad, Keith McMillen
Instruments has integrated full MIDI five-pin DIN hardware compatibility courtesy of its own MIDI Expander, enabling BopPad to be used
in a standalone capacity with external drum machines, hardware synths, or rack effects by providing power and connectivity. No
computer (necessarily) needed!
Whatever way users choose to work with BopPad, percussive performance is where its innovative heart is. It can comfortably operate as a
conventional practice pad with realistic feel and a portable, lightweight design — robustness that has been made even more so, thanks to
improvements in its production version such as an anodised aluminium USB guard with a finish that is as tough as the guard itself, so there is no chance of paint abrasion due to impact, never mind accidentally hitting the USB cable itself! In every sense, then, BopPad is rugged, ready to go anywhere and be played however hard the user sees fit.
For Keith McMillen Instruments, bringing BopPad to life in its final form is a proud moment — making something this sensitive, this rugged, and
at such an appealing price point is very demanding. So who better to have his final say on what could conceivably be the last word in
expressive electronic drum pad controller design than company Founder & CEO Keith McMillen, himself an acclaimed audio and music
technology innovator of some 30 years standing: “For years we’ve been asked to make a drum pad with our patented Smart Fabric Sensor
technology — a control surface that would integrate seamlessly into a standard drum kit or work perfectly on its own, so we made BopPad,
the smart sensor electronic drum pad controller… time to give the drummer some!”