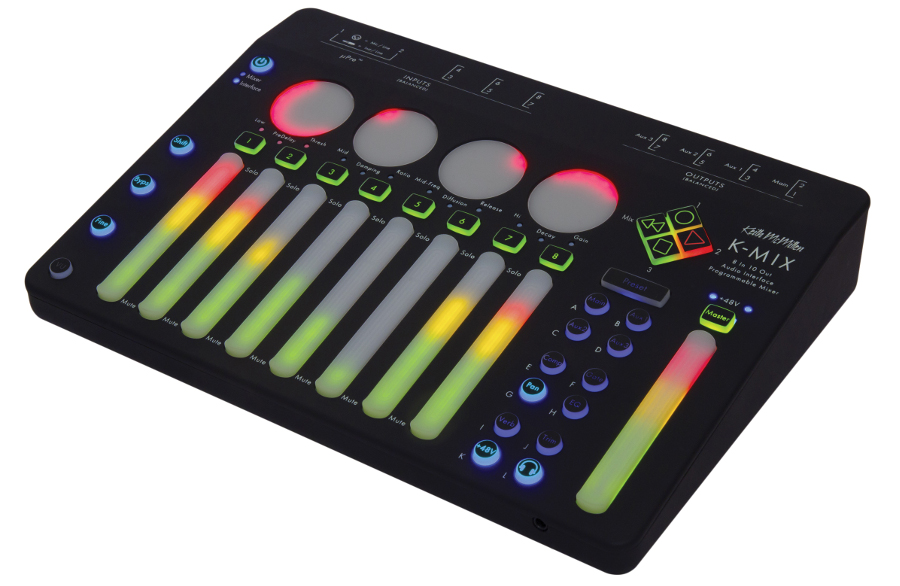 And who better to make the formal introductions, then, than namesake company founder Keith McMillen, an acclaimed audio and music technology innovator of some 30 years standing. Says the man himself: “I needed a very special mixer that did not exist — a fully-programmable, MIDI-controlled, ultra-high-quality portable mixer. Not having a mixer that could do all of this when wanting to play live in a group without a sound man was heartbreaking. K-MIX had to be capable of tying all of my needs together — from live inputs to USB interfaces — to then operate as a fully-programmable stage mixer.”  Which was exactly what happened when innovating during development of K-MIX to create an audio interface, digital mixer, and control surface like no other. As a rugged, eight-input/10-output audio interface and programmable mixer, the finished product features two ultra-accurate, low-noise μPre™ preamps, and a precision opto-tactile control surface that was designed from the ground up to command any DAW (Digital Audio Workstation) with an unprecedented level of control with eight channel faders, one master fader, four rotary controls, nine channel select buttons, four bank select buttons, and 17 function buttons — super-clean audio neatly wrapped up in an accessible, portable package allowing artists to focus on one all-important task: making music!  Whether working in the studio or out on the road, the USB bus-powered K-MIX is a go-anywhere, fully-programmable mixer that features flexible routing, per-channel DSP (Digital Signal Processing) — three-band, semi-parametric EQ, compressor/limiter, gate, master reverb (with individual sends per channel), and surround (Quadraphonic, 5.1, 7.1, and Octophonic) output — and can also function without a computer, courtesy of the included USB power supply (with international convertor blades). An audio multi-tool that can meet any artist’s needs. What’s more, with no moving parts, K-MIX can comfortably be transported to and fro in a backpack without fear of snapping off a fader or knob while still providing unrivalled audio quality, mixer functionality, and control.  Talking tech from an audio perspective, eight balanced analogue inputs on two XLR/TRS combo jacks and six 1/4-inch TRS connectors can comfortably handle signals up to +28dBu, while eight balanced analogue outputs on eight 1/4-inch TRS connectors are supplemented by one Micro-USB digital connection (providing audio I/O using 24-bit AKM convertors at 44.1, 48, 88.2, and 96kHz sample rates), MIDI I/O, and power. A second Mini-USB connection provides power and MIDI I/O (via an optional KMI Expander). Evidently, communication with the outside musical world works wonders, while those ultra-accurate, low-noise μPre™ preamps proffer +48V phantom power, +60dB additional gain, unweighted THD of -107.6dBu @ 0dB gain, and an attractive 96kHz frequency response of ± 0.56dB @ 20Hz–40kHz. Meanwhile, MIDI position CC output on all faders, MIDI position CC output on all rotaries, and MIDI note output on all buttons brings MIDI control to almost anywhere on this fully-programmable, ultra-high-quality portable mixer, meeting the needs of Keith McMillen himself — and any adventurous artist, for that matter — musically head on.  On the face of it, K-MIX clearly packs a formidable punch for anyone wishing to simply pack and play. So why not pack one in your backpack today and get on with making music… wherever it may take you!  K-MIX will be being showcased on Keith McMillen Instruments’ booth (#6226) in Hall A at The NAMM Show 2016, January 21-24 in Anaheim, California. Come check it out!