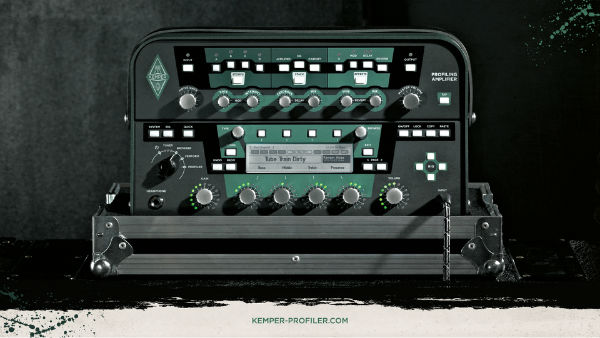 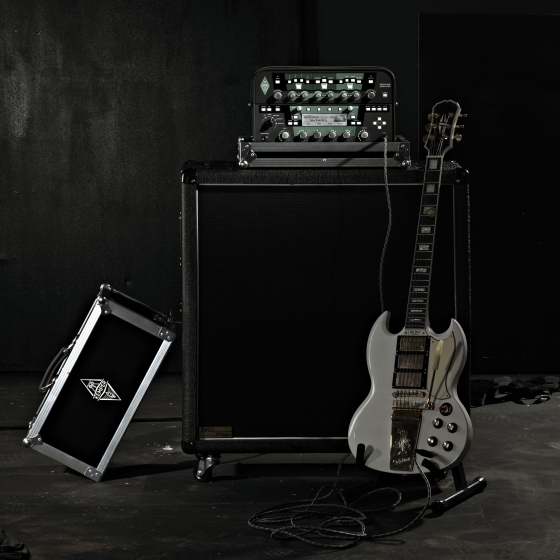 The 600 Watts Class D amplifier is carefully selected for the guitar amplification system to guarantee utmost performance. After extensive listening tests, a lot of measuring and looking thoroughly at the typical sonic behavior of power amps for guitar amplification on the market it became clear that only the best components are capable of delivering impressive results.

Many touring musicians have been consulted and now the PowerHead is ready to rumble at the NAMM Show. Visitors can play the Amp at the booth in conjunction with a choice of Cabinets: A classic 4 x 12” standard guitar cabinet, a 1 x 12” guitar cabinet, and a selection of full range solutions.

The Amplifier delivers 600 Watts at 8 Ohm, 300 Watts at 16 Ohm, does not heat up (temperature can be monitored on display) and is lightweight. The size of the Kemper Profiler remains exactly the same, the backside is completely covered now.

The Kemper Profiler PowerHead will be available some time after NAMM and retails for Euro 2100,- and USD 2730,- . Owners of the original Kemper Profiler will be able to purchase the Amp Upgrade for a price TBA. It is required to send the Profiler to he manufacturer to install the amp safely.

About Kemper Amps:
The Kemper Profiler represents a radical new approach to guitar sound. For decades, the electric guitarist has effectively been shackled to the tube amplifier as the only solution for getting “that sound”. This combination may indeed be glorious, but it is far from ideal; achieving consistent results between practice, studio, and touring situations continues to challenge the guitarist, just as it has since the early 1930′s. With the advent of the Kemper Profiler, everything has changed. For the first time in history, guitarists are free to create the most unique and individual tones that reflect the very essence of the player, and then capture these exact sounds into the digital domain with Kemper’s patented technology.