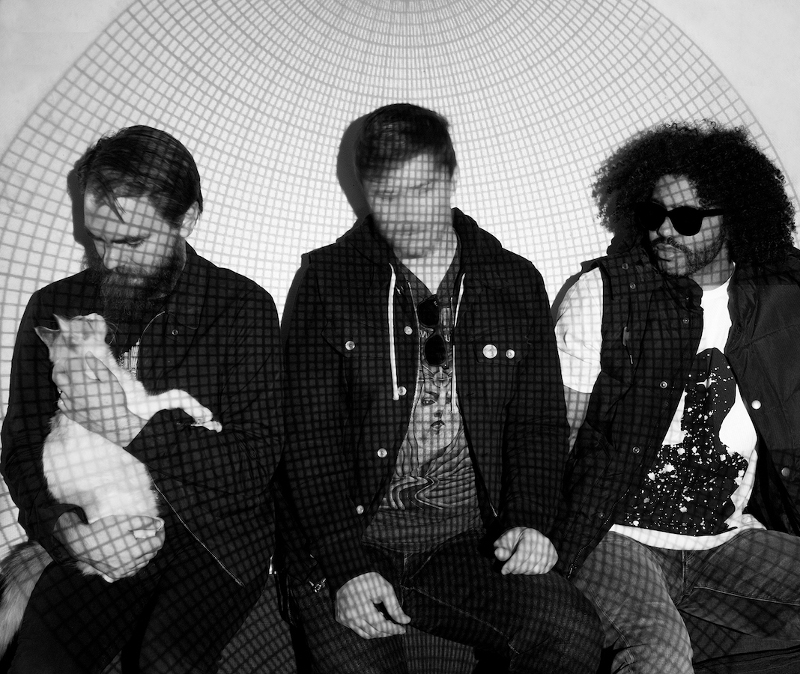 clipping. formed in Los Angeles in 2009, initially conceived as a remix project by beat-makers William Hutson and Jonathan Snipes, but began in earnest when the dynamic duo later joined forces with rapper Daveed Diggs, building both on their long friendship and shared obsession for rap, experimental music, and genre fiction that remains central to their technologically creative and compelling fusion. First up, William Hutson talks through his setup and application: “I have a classic harsh noise pedalboard setup — several inputs go into it, including a contact mic taped to a hobby box full of screws or pennies; then there’s the beats coming out of Jon’s computer, a white noise generator, and I also have some samples that I play back occasionally on an iPad, but mostly it’s turning on and off different distortion chains.”  Continues Jonathan Snipes: “I have a Max patch that’s essentially like a really buggy, terrible version of Ableton Live that crashes a lot and only I know how to use! It’s utterly overcomplicated and involves way too many text files that it needs to parse all the time. I have another layer in the Max patch that I play over the top of things, too. It’s an iPad-controlled effects matrix thing that I built, but it’s always nice to know that if I do something stupid or do nothing at all then the song is continuing and Daveed can still rap. Adding a new song is like, ‘What is appropriate for this song? What should I do with these tools in front of me that can add to this and sound cool?’”  Getting those tools and that avant-garde approach to sound cool onstage is where clipping. collectively comes into its own, as audiences to their upcoming tour support slot for American alternative psychedelic rockers The Flaming Lips will witness. William Hutson attests to the challenge, claiming, “My stereo out used to be on a separate DI, but, because I’m using so much microphone feedback and distorted sounds, sound guys would just — over the course of a show — make me quieter and quieter and quieter until, by the last song, I would be, like, ‘I’m off; they’ve turned me off!’”  Working with unsympathetic FOH sound engineers in new environments is uncool, clearly. Cooler still, though, the recent addition of Keith McMillen Instruments’ innovative K-MIX, a next-generation audio interface and programmable mixer housed in an indestructible casing with no moving parts, played a major role in helping clipping. to meet those technical challenges head on. “It’s great, because we’ve never had anything we’d liked to sub-mix me with before,” William Hutson notes. “Now we give them two pairs of outputs from the K-MIX, so they can’t turn me off!”  Obviously sympathetic to his beat-making partner’s plight, Jonathan Snipes is equally enthusiastic about the K-MIX addition, adding, “And we can throw compressors and EQs and things on you that we actually like, and also not roll off your lows and highs like the sound guys usually do, because those are super-important. So it’s super-useful in our setup —because of its versatility. I don’t feel like I’m using its full capacity, but things that are versatile and deep are great because they can be exactly what you need in different situations.”  Surely songs from the likes of clipping.’s latest release — 2016’s Splendor & Misery (available on Sub Pop and Deathbomb Arc) — have never sounded so good when transported to a KMI-supported stage setting? Clearly, K-MIX is one for the road… just ask Jonathan Snipes!