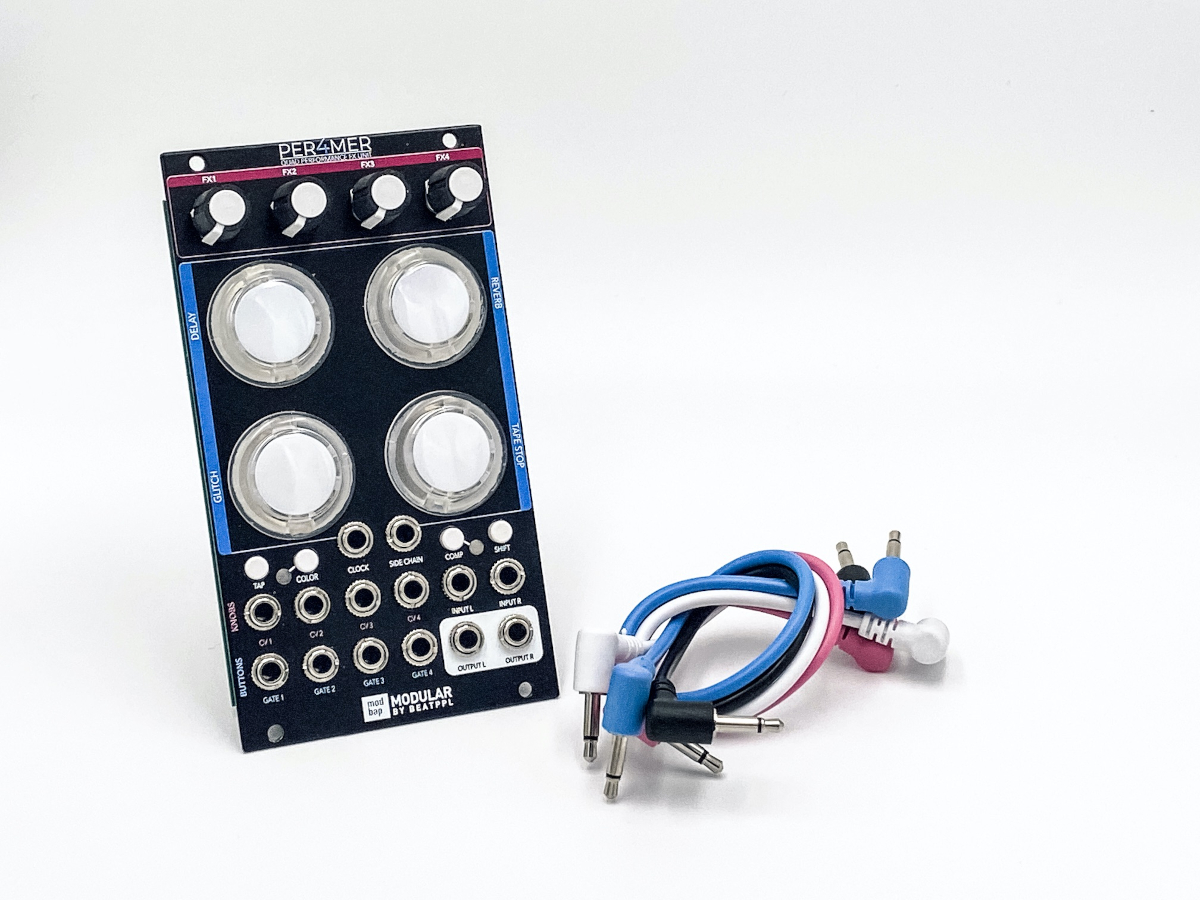 The basic principle behind Per4mer is immediately apparent in its easy-to-follow front panel, packing a creative knockout punch in a compact (14HP) stereo effects-enabling Eurorack module form factor — feed in an audio input to then trigger on-the-fly effects, bringing DJ- style live improvisation to a modular environment. Effects can be triggered simultaneously or individually, where an inspiring effect palette combines to generate uniquely unconventional beats and melodies.
Per4mer puts a Doppler-style DELAY, lush REVERB, GLITCH (beat repeat), and TAPE STOP effects easily at anyone’s fingertips for triggering via four dedicated translucent mini-arcade buttons — buttons that can be manually operated or triggered from the four external gate inputs. Each effect has a set of four effects parameters that can be controlled using the four (FX 1, FX 2, FX 3, and FX 4) rotary knobs or by the four CV (control voltage) inputs. COMP (compression) with SIDE CHAIN input and COLOR processing effects are also available, along with CLOCK input and TAP tempo options. Obviously, external side chain and clock can be connected to interface with other modular and electronic music gear.
“Per4mer acts like a bridge between hip-hop and Eurorack.” So says Modbap Modular Designer and Founder Corry Banks. As a writer, emcee, producer, hip-hop artist (Phashara), and IT pro, he should surely know! “It packs in concepts familiar to lo-fi and beat-making circles, but it brings something fresh to Eurorack,” continues Corry Banks, before adding: “I think Per4mer will be a great entry point to modular synthesis for the modular-curious beat-maker — throw it into a small pod and use it like a standalone performance effects unit or rack it up with other modules to liven things up a bit.”
But best of all, Per4mer’s four performance effects — influencing its notable nomenclature, clearly — can be momentarily engaged or latched individually or simultaneously. Each effect has four tweak-able parameters associated with the four rotary knobs, duly designed for facilitating live improvisation with endless one-off, on-the-fly sounds and rhythmic dynamics. All audio inputs (INPUT L and INPUT R) are provided as mono connections, paired for stereo. Subsequently, Per4mer not only delivers a series of excellent effects and sound design possibilities, but it also allows the creative, classic, tried-and-tested techniques used by beat-makers and DJs to be applied to the wonderful world of Eurorack modular, especially enhanced by manual performance.
Digging deeper, the compressor allows for control over four compression (Threshold, Ratio, Attack, and Release) parameters via the four rotary knobs. Catering perfectly to those users craving the classic ducking sound of side chaining, the compressor also features selectable side chain detection that allows side chain activation via ‘sidechain input’, ‘audio input’, ‘clock input’, or ‘tap tempo’.
The COLOR processor features four color presets bringing texture and character to the signal path, pre effects — namely, Classic (12-bit), LoFi (8-bit), Saturation, and Wax (vinyl simulation). Such presets can be used in combination with the performance effects and compressor for a more characterful result. Reasons Corry Banks, eventually ending on a high note: “The COLOR processor is the special sauce built into Per4mer. It adds so much mojo and attitude. I lose time just enjoying processing audio through it and creating soundscapes to sample. Per4mer is a dope sound design tool as much as it is a dope performance effects module!”
Per4mer is now available to preorder at a retail price of $399.00 USD directly from Modbap Modular’s online Shop (https://modbap.com/shop/) and expected to start shipping in November 2020.
For more in-depth information, please visit the dedicated Per4mer webpage here: http://www.modbap.com/product/per4mer/
See and hear Modbap Modular Designer and Founder Corry Banks introducing Per4mer here: https://youtu.be/UJFmw4qRMe8