n-Track version 8 to be released next week

n-Track Studio Version 8 and Version 8 EX will be released next week. There are some new features. 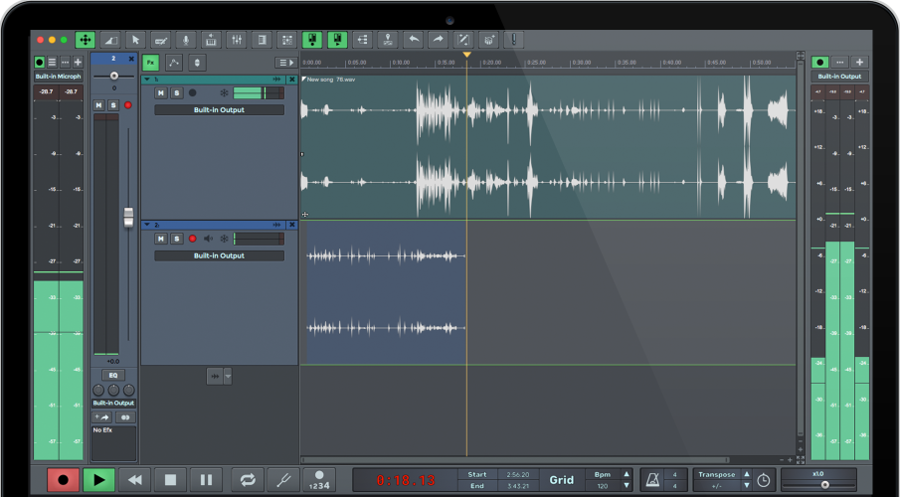 What’s new:
*Songtree Integration:
n-Track Studio 8 brings music collaboration inside your DAW environment. The new integrated Songtree app lets you make music with others online. Get another musician into your project, or contribute to a song started by others.
*Streamlined Recording Process:
Capture your best performances with the new multi-take recording mode, control parameter automation on separate lanes for each tracks, or get experimental with internal recording routing.
* Step Sequencer:
Create beats, sequences or arpeggios with the new Step Sequencer.
Start a song in one click using the fac
*Pure Data Support:
You can now load your Pure Data patches inside n-Track and use your favorite sounds and effects in your song.
*Beat Doctor:
Detect transients and tweak your beats or rhythmic performances for perfect timing.
*Custom Envelope Shapes:
You can now freely draw your envelopes and view them on multiple lanes.
*Audio Part Widgets:
Audio parts now have fade and volume widgets for quick and precise editing.
*MIDI Step-Recording:
Insert a note per step for advanced beat or sequence programming.
*Support for Rex Files:
.REX files can now be imported and edited into your project.
*Support for 4K displays:
The new n-Track Studio features optimized graphics for 4K and high DPI screens.
Recording & mixing:
Records and plays back a virtually unlimited number of audio and MIDI tracks
VST, VST3, DirectX (Windows), AU (Mac) and ReWire effects can be added to each channel/track
Volume, pan, aux sends & returns and effects parameters can be automated: you can „program“ fade-in/outs, cross fades, boost the volume of a track when there is a solo etc.
Live input processing allows to process with plug-ins live signals. Record the ‚dry‘ (unprocessed) signal while processing and reprocess the recording later – i.e. play a guitar through a distortion plug-in then change the distortion after the recording
Cross-Platform:
n-Track is available for the following plaftorms: Mac OSX, Windows, iOS, Android
Record a song on your iPad on the go and then import it on your Windows or Mac computer for detailed editing and mixing.
Soundcards & audio interfaces:
Supports 16 and 24 bit single and multichannel soundcards at sampling frequencies up to 192 Khz.
Compatible with Asio, WaveRT, WDM, DirectSound and MME audio drivers, which means that n-Track can work with almost any soundcard available today with the lowest possible latency.
Multichannel soundcards or more than one soundcard are supported: you can record multiple tracks at a time and output to more than one stereo output. Each output channels has its own master channel effects and volume control.
Effects:
Built-in effects include Reverb, Compression, Parametric & Graphic EQ, Echo, Auto-volume, Pitch Shift, Chorus, Multiband Compression, Spectrum analyzer.
Includes the n-Track Drums drum synth/step sequencer module.
Supports third party DirectX, VST 2.x, VST 3 and ReWire plug-ins.
Supports VST Instruments and DirectX Instruments synth plug-ins: sample-accurate MIDI tracks can be sent to VSTi/DXi software MIDI synths, without the need of expensive hardware MIDI synths.
Supports ReWire technology by Propellerhead Software AB: signals from other programs (such as Reason, Ableton Live, Fruityloops and many others) can be mixed in realtime with n-Track’s own channels.
Supported formats:
Imports and exports .wav, .mp3, .wma, .mid, .ogg, .flac, .aiff, .cda, .sng, .sgw audio files Imports and exports EDL multitrack song files for exchanging songs with other multitrack programs.
Sync to other programs or external devices using SMPTE/MTC or MIDI Clock sync, acting either as master or slave.
Supports surround mixing for creating DVD audio projects using 5.1, 6.1 and 7.1 channels surround formats.
Videos (AVI, MPEG) can be played in sync with the song in a dedicated video playback window.
Once finished recording the whole song, you can mixdown all the tracks into a single wav file and to use it to record an audio CD track using a CD recorder or to distribute the song via internet using the built-in mp3 encoder.