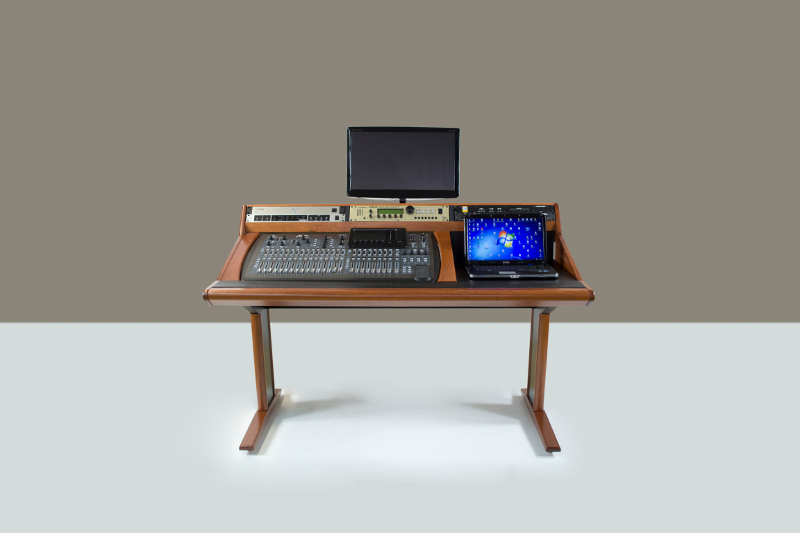 Studio furniture designer and manufacturer ZAOR is proud to introduce the MAREA media workstation — another addition to its flourishing family of CLASSIC Series media workstations, this time tailored to stylishly and comfortably accommodate a new generation of compact mixing consoles and associated accessories — as of July 21…

Once upon a time in the not too distant past, expansive and expensive large-format mixing consoles in equally expansive and expensive professional recording studios were the only way to go for those pursuing professional-sounding recordings. These gradually gave way to more compact consoles in more compact studios as audio professionals sought to take control of their more cost-conscious destiny driven by a democratising recording revolution resulting in cost- and space-saving mixing consoles all but disappearing with the advent of DAW-based workflow when mixing in the box became standard practice for home-based project studios (and beyond). But more recently smaller mixing consoles have been making a serious comeback in digital form from the likes of Behringer and PreSonus, for example, as evidenced by the runaway success of their respective X32 and StudioLiveTM series. Such new-generation digital designs often feature AD/DA conversion for high track counts, high-quality inbuilt effects, flexible routing, and much more besides, including, of course, total recall of all settings — and all for a price unimaginable in that not too distant past. Perfect timing, then, for ZAOR Studio Furniture’s timely introduction of the MAREA media workstation, perfectly positioned to provide a suitable home for the likes of the X32 and StudioLiveTM series — and much more besides.
As the latest addition to the flourishing family of CLASSIC Series media workstations, MAREA is both generously and perfectly proportioned to comfortably cater for the many differently shaped and angled digital mixers or DAW controllers — such as Solid State Logic’s popular Nucleus, for instance — in a dedicated mixer tray section purposefully planned to save studio real estate while maintaining modern-day production workflow. A laptop or other equally effective accessory can be sat in the flat surface to its left or right while a bridge section above handily holds up to 6U of rack-mountable outboard. As a nice finishing touch, two large computer monitors can comfortably stand side by side atop a flat surface behind — all this in a compact and bijou workspace with a 158cm by 110cm footprint is no small achievement! As always, the ZAOR Studio Furniture design team has paid particular attention to cable management, making ample room for whatever’s needed to connect everything together while keeping things neat, tidy, and professional with access passageways in all the right places.
The MAREA media workstation itself is supported by two sleek, stylish, and sturdy legs featuring solid wood to avoid boxy, resonant design flaws that often hampered the smaller-scale audio professional in the past. Placing relevant controls within direct reach of any user sitting in the so-called sweet spot with any rack-mounted gear slightly set back at arm’s length means that MAREA makes the most of the primary ergonomic space available and users can comfortably get on with doing what they do best — making the most of their audio production, whatever that may be.
MAREA’s neutral black-coloured body blends effortlessly in with any studio surroundings while its side panels, legs, and armrest are all attractively fashioned from locally-sourced oak — which can be left in its natural blond-coloured state or stained to Cherry, Walnut, Mahogony, or Black (as per the purchaser’s wishes) — to clearly convey a sense of its inbuilt quality and definite durability. Make no mistake. MAREA is one seriously professional media workstation that will look and play the part in any professional studio setup where space is at a premium. Premium priced it is not, however, weighing in at an equally attractive price point to entice purchasers with the prospect of still being able to fill their boots — and their MAREA — with great gear! Great ergonomics and great sound living in perfect harmony, MAREA makes sound economic sense, that’s for sure. What more could a cost-conscious audio professional need or want?