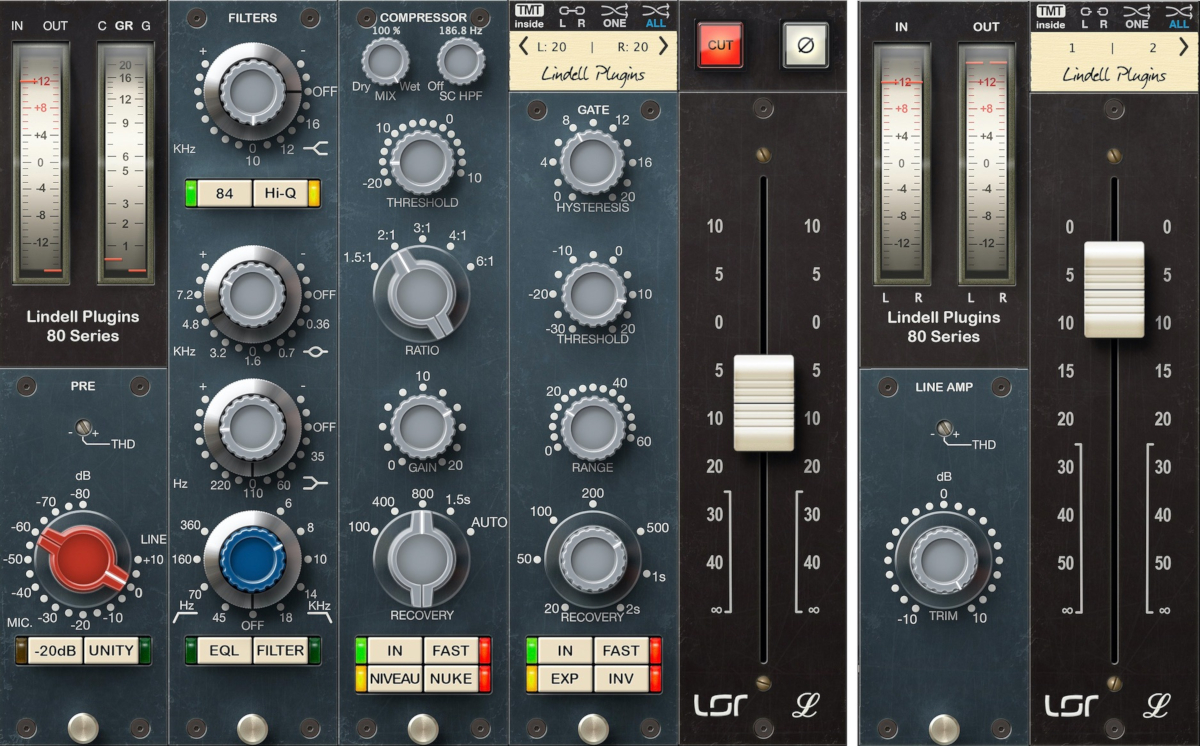 One of the most beloved console emulated to the core — Neve 80 Series Console and 80 Series Mix Buss emulations
Lindell Plugins is proud to bring you their exacting emulation of original 1073/1084/2254 channel modules and the 1272 line amplifier buss module into your DAW. One of the classic hand-wired mixing consoles made by Neve Electronics, the 8028 is a truly magical desk on which countless seminal records have been cut in the last 30 years; think Queen, David Bowie, Nirvana, Red Hot Chilli Peppers, and Slipknot –– the sound of this analog legend is nothing short of extraordinary. In Lindell 80 Series, you will find aggression and power to make your records sound as analog as possible.
Dating back to 1969 when first brought to the market, the 80 Series analog mixing desks attained somewhat of a cult-like status due to their uniqueness and rarity. Known for their breathtaking depth, pristine high end, and rich definition, the individual modules that comprise these desks have stood the test of time. It is no wonder that institutions like Sound City Studios, Oscilloscope Labs, Electric Lady Studios, and Sphere Studios have relied on the sound and features offered by this desk.
Lindell 80 Series brings the sound of this desk into the digital domain. Track, mix, and master your records with this particular Neve flavor and achieve the thick tone only made possible by the individual components found in the original channel strip.
To complete their new console offering, Lindell Audio has licensed the patent-pending Tolerance Modeling Technology (TMT) from Brainworx in order to provide an authentic analog experience in the digital realm. Mix your songs with 32 different channels in order to replicate the various component tolerances found in the original hardware. As part of the Plugin Alliance family, Lindell are also offering a workflow and feature set with this new TMT console that will feel very familiar to all users of the current bx_console… line.
Legal Disclaimer: Lindell 80 Series was developed by Lindell Audio using its own modeling techniques, and one of the products studied was the Neve 1073, 1084/2254, and Neve 1272 (Buss). Neve is a registered trademark of AMS/Neve Inc., which is unaffiliated with Lindell Audio. AMS/Neve have not licensed any intellectual property for use in the Lindell 80 Series, nor have they endorsed or supported the Lindell 80 Series in any manner.
Lindell Audio’s Lindell 80 Series is available for purchase (as an AAX Native-, AU-, VST2-, and VST3-supporting plugin for MacOS 10.9 through 10.14 and Windows 7 through 10) at an attractive introductory price of $199.99 USD — rising thereafter to an MSRP (Manufacturer’s Suggested Retail Price) of $249.00 USD — from here: https://www.plugin-alliance.com/en/products/lindell_80_series.html
Note that Lindell 80 Series users are also provided with access to Lindell 80 Buss, a separate plugin providing an exacting emulation of the 1272 drop-in module used as a buss amplifier originally built for Neve Electronics’ ‘80 Series’ analog mixing consoles.
A fully-functional, 14-day trial of Lindell 80 Series is available to anyone registering for a free Plugin Alliance account here: http://www.plugin-alliance.com/en/registration.html
Lindell 80 Series is included in Plugin Alliance’s monthly MEGA Bundle subscription (https://www.plugin-alliance.com/en/products/pa-mega-bundle-monthly.html) and annual MEGA Bundle subscription (https://www.plugin-alliance.com/en/products/pa-mega-bundle.html) at no extra cost!
Note that the proprietary Plugin Alliance Installation Manager means users can select, download, and install only the products and formats needed for their system. For more in-depth information, including several superb-sounding audio demos, please visit Plugin Alliance’s dedicated Lindell 80 Series webpage here: https://www.plugin-alliance.com/en/products/lindell_80_series.html
Watch Plugin Alliance’s teaser video for Lindell 80 Series here: https://youtu.be/_T1bMlKadAk