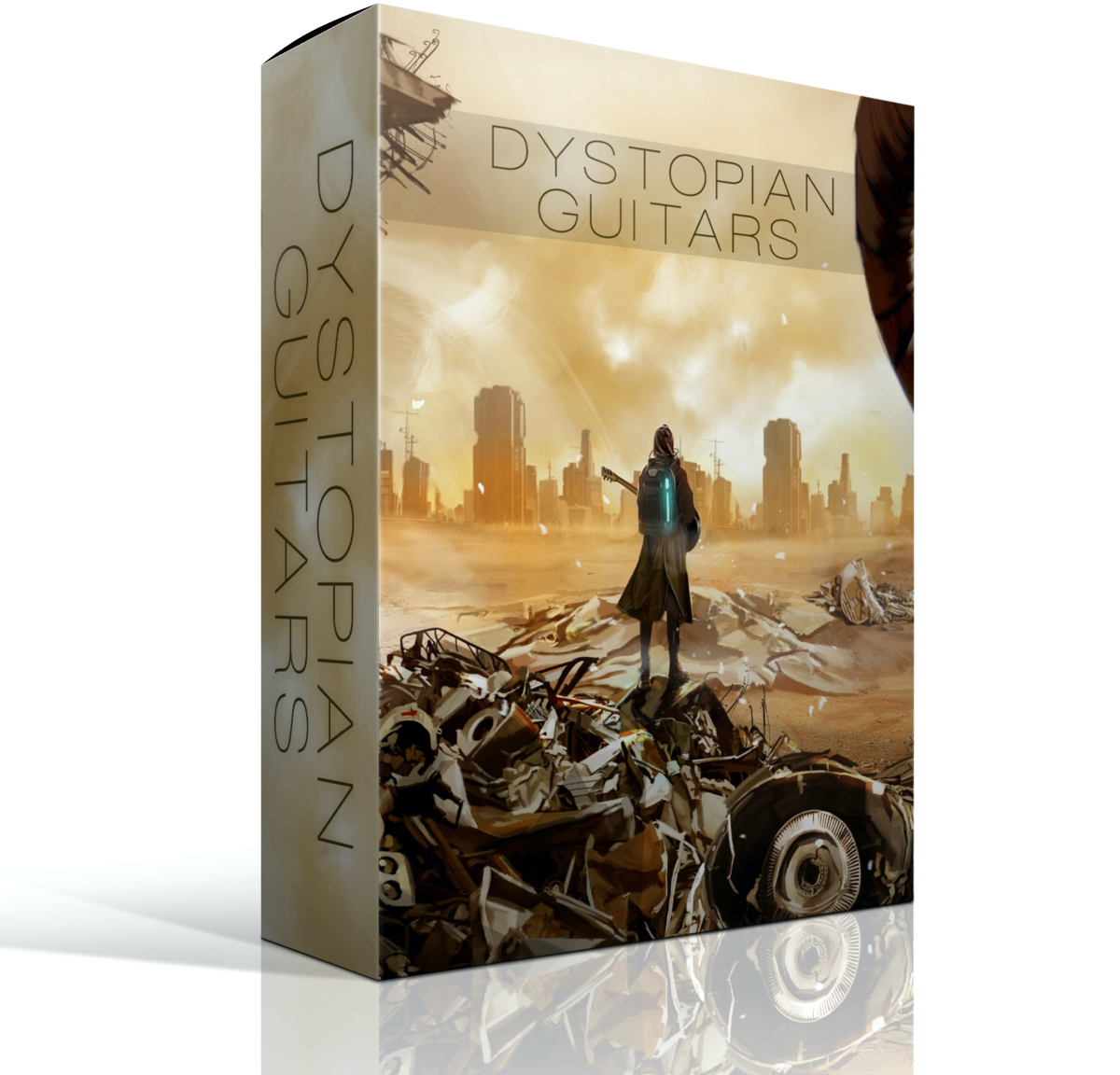 Ultimately unique in today’s swelling soundscape production toolset, DYSTOPIAN GUITARS includes several different types of KONTAKT instruments fashioned from the perspective of working film composers, ensuring everything is very useable right out of the box with no fillers and a very intuitive GUI (Graphical User Interface). It includes several so-called Natural Solo instruments and Unnatural Solo instruments — fully playable multisample patches; customisable Ensembles, capable of performing multisamples, pulses, and sequences all at the same time; a playable Pulse Designer, with several guitar-based pulses and arpeggios; a collection of acoustic and processed Shimmers; several pads and ambiences; a collection of guitar Tools and FX; as well as PulseSetter-Sounds’ most powerful sequencer to date.
Digging deeper, Ensembles are complex instruments that let DYSTOPIAN GUITARS users perform several simultaneous layers of music in a very organic way when combining loops, multisample guitars, pads, sequences, and other elements — especially effective for film composers wanting to perform and quickly compose complete scenes, while working well also as a starting point when writing sketches or building a unique palette. Possibilities are (almost) endless!
Elsewhere, DYSTOPIAN GUITARS showcases several multisample guitars and other string instruments, plus their alter egos — effectively hybrid Frankensteins that work well when writing modern film music. Moreover, PulseSetter-Sounds tried to tweak even the natural versions by sampling them in unusual ways, as is its way — sampling an acoustic guitar by mostly playing open strings, for instance, or slapping an electric bass with different kinds of sticks.
Shimmers are various combinations of fast arpeggios and tremolos that will add movement, air, and expression to any kind of score — from an intimate piano song to a king-sized sweeping orchestral scene. Several acoustic versions are included alongside processed versions to match any style, so users are also able to mix and match their own combos.
Creativity abounds further still since PulseSetter-Sounds saw fit to helpfully provide DYSTOPIAN GUITARS with several kinds of pulses and loops that will match many different styles. Supplementing hundreds of pulses are their ‘playable’ versions, whereby users can play chords or combine loops in different keys — a very organic way of using loops. Last but far from least, the provided Pulse Designer duly lets users combine most loops for one-pass performances.
Performance-wise, DYSTOPIAN GUITARS also comes complete with more than a hundred customisable pads that its users can also mix and match in pairs, plus a powerful Gate and FX sequencer that lets users customise them to make them unique to their needs.
Needless to say, PulseSetter-Sounds also added a number of different instruments to DYSTOPIAN GUITARS that did not sit easily in any other category, such as infinite raisers and downers, guitar impacts and scrapes, chords, a feedback machine, and more besides.
Besides being able to sequence all available effects in the FX GUI, discerning DYSTOPIAN GUITARS users can take advantage of PulseSetter-Sounds’ powerful Quad sequencer that will let them work with four independent lines, combining note sequences and arpeggiators in a very intuitive and musical way.
While taking advantage of newer KONTAKT guitar effects, PulseSetter-Sounds succeeded in building very organic instruments, combining those new effects with its own ‘baked’ versions using its in-house guitar and synth rigs — Muted Metal Guitar Combo is a prime example of this in action, allowing anyone to play very convincing heavy grooves without the need for external effects or external guitar software. Since the PulseSetter-Sounds team had so much fun with this, they decided to include a whole set of metal sequences in DYSTOPIAN GUITARS.
With 21.32 GB of highly-creative content designed to cover all modern hybrid guitar grounds for film scoring as a huge KONTAKT-hosted virtual instrument incorporating a wide range of sounds, from clean and dreamy atmospheres to hellish industrial tones, it is going to take time to fully explore DYSTOPIAN GUITARS as a new kind of library in which PulseSetter-Sounds invested so much time — three years in the making, no less. Little wonder, then, that the company collectively hopes that each and every user of DYSTOPIAN GUITARS will find a permanent place for many of its inspiring instruments in their template for unique use in project after project, for many years to come!
DYSTOPIAN GUITARS can be purchased as a 21.32 GB (16 GB compressed) KONTAKT instrument for a time-limited introductory promo price of $169.00 USD until November 19, 2020 — rising thereafter to $199.00 USD — via its dedicated webpage, which also includes more in-depth information (including some superb-sounding audio demos), here: https://pulsesetter-sounds.com/product/dystopian-guitars/ (Note that DYSTOPIAN GUITARS requires the full version — 5.7 or higher — of KONTAKT, Native Instruments’ advanced flagship sampler for macOS 10.12 – 10.15 and Windows 7 / 8 / 10.)
See and hear DYSTOPIAN GUITARS in action in PulseSetter-Sounds’ must-see overview video here: https://youtu.be/F7u6kUg4abk
Watch PulseSetter-Sounds’ tantalising trailer video for DYSTOPIAN GUITARS here: https://youtu.be/-cV19azC89o