ECHT, THE NETHERLANDS: virtual instrument and effects plug-in developer Rob Papen Soundware is proud to announce availability of eXplorer4 — taking the fourth incarnation of its all-encompassing eXplorer software package to even deeper depths of musical inspiration by combining all of its award-winning virtual synths and acclaimed effects plug-ins, including its simultaneously-released latest product, Predator2, a natural-born, killer-sounding soft synth reboot, into an attractively-priced production and sound design dream bundle — as of November 25… 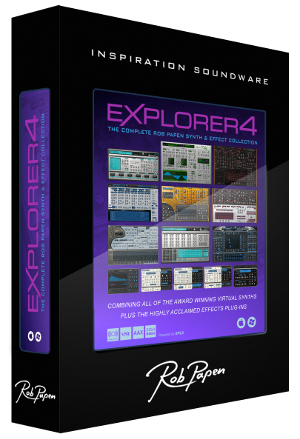 eXplorer4 features 15 Rob Papen products — namely, Blade, quite literally a cutting-edge soft synth; the breathtaking BLUE-II, the self-styled ‘Crossfusion Synthesis’ soft synth (since it covers so much musical ground so effectively); Predator2, the all-new, go-to soft synth to die for and the latest addition to this latest eXplorer incarnation (while its Predator predecessor remains part of the bundle, together with the PredatorFX filter, modulation, vocoder, and effects plug-in); Punch, a speaker-busting, body-rattling virtual drum synth; Punch-BD, based around the BD (bass drum) module of the multi-award-winning Punch to deliver the fattest-sounding bass drums possible; RG, a unique electric and acoustic guitar groove virtual instrument with sequencer and synth effects; RP-AMOD, an effects plug-in that uses modulators to alter audio in different ways with classic effects like chorus, ensemble, flanger, phaser, and tremolo that can be tempo-synced to DAW-recorded music; the RP-Delay effects plug-in with six delay lines, eight filters, four LFOs (Low Frequency Oscillators), a reverser, and more; RP-Distort, a wicked effects plug-in designed to destroy, distort, or more subtly alter any audio; RP-EQ, a silky smooth-sounding channel and mastering EQ effects plug-in; RP-Verb, an advanced, transparent, and musical-sounding algorithmic reverb effects plug-in with easy-to-use controls; RAW, a soft synth specialising in ‘distorted’ sounds specifically suited to EDM (Electronic Dance Music) and beyond; and the ultra-deep-sounding SubBoomBass groove bass soft synth with built-in step sequencer.  Since it makes sense to also own PRISMA, an advanced utility plug-in for Mac (32- and 64-bit, AAX, AU, and VST for Mac OS X 10.6 or higher) and PC (32- and 64-bit VST for Windows Vista, 7, 8, and 10) that allows any Rob Papen product owner to stack (up to four) of their virtual instruments — including instances of the same PLUG-IN or otherwise — as a single so-called ‘prismatic’ sound source, eXplorer4 owners of course can request to add PRISMA to their Rob Papen account for free. Fortunately for them, using PRISMA in combination with eXplorer4 enables them to create the most stunning stacked sounds imaginable when combining various virtual instrument combinations!  Come Q2 2017, the upcoming RP-Verb 2 effects plug-in is expected to be joining its software siblings in eXplorer4, making for an even more attractively-priced production and sound design dream bundle. Before then, though, eXplorer4 still represents a significant saving of over 50% when compared to separately purchasing each and every Rob Papen virtual instrument and effects plug-in included. It’s a no-brainer… as those who have already bought into the dizzying depths of the eXplorer experience will, without doubt, already be well aware.
eXplorer4 can be purchased in a boxed edition — featuring 15 AAX (32-/64-bit), AU (32-/64-bit), VST (32-/64-bit) compatible audio software plug-ins for Mac OS X (10.6 or higher) and Windows (Vista, 7, 8, and 10) — from authorised Rob Papen dealers worldwide or as a download directly from Rob Papen for €499.00 EUR/$499.00 USD from here: http://www.robpapen.com/eXplorer4-buy.html (Customers who have purchased or upgraded to eXplorer-III between July through to — and including — November 25, 2016 are eligible to upgrade for free, otherwise owners of eXplorer-III can upgrade to eXplorer4 for €79.00 EUR/$79.00 USD.)