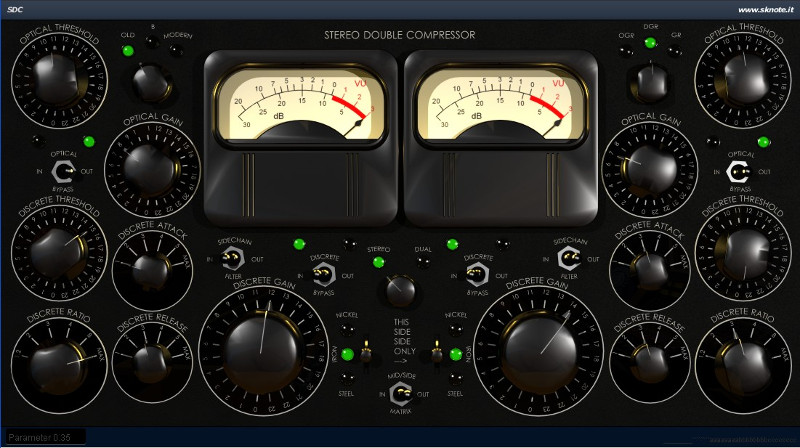 Several metering options. Great and versatile for mixing on all kinds of sources, extremely useful and effective for mastering. Several opto-couplers options. From older to modern. The most interesting and individual part of an opto compressor is of course the opto-coupler.

Generally speaking a compressor is „optical“ whenever the coupling between control signal and controlled gain is achieved through one light emitting thing and one light-sensitive thing. It can be done through a lot of different couples of devices. Bulbs, LEDs, panels… Light dependent diodes, transistors, resistors…

The most modern (and probably less interesting) couple is probably LED + transistor. The classic, revered one is electroluminescent panel + resistor (ELP + LDR).

It sounds interesting because each device has a time domain response which is quite complex, slow and with a pronounced frequency dependency. All musical things, when they happen to be combined the right way. Like with vari-MU, the most of the final behaviour of the comp resides in a single component (a tube, an optocoupler). ELP+LDR is an extreme.

ELP+LDR is used for this comp. While analysing the units, we started testing several options (also because designing our new upcoming ultra-cheap hw opto compressor).

Both ELP and LDR have weird reactions. The couple makes it. The mode you control the panel is extremely important. You can feed audio into it, feed a control signal, PWM, etc.

Also there are lots of LDRs available, all with different character.

Ageing effects where filtered out where they are not interesting. Such optocouplers are damaged by temperature and ageing. Lower sensitivity is not interesting. Frequency dependency, including frequency-dependent timing, are the musical part.

Note how panel and resistor both have attitude.

So, three combinations are available. The first one has pronounced frequency-time dependency, frequency-sensitivity dependency (whose static part is usually partially compensated for by control circuits) and slow reaction.

The second one is like an unit made today using the same kind of components, new.

The third one models something done from „better“ performance devices (in the original purpose, light emitters should be immediate, LDRs should be fast and flat).

These opto compressors don’t include controls so I thought variations are useful and interesting.

The first model probably is interesting on acoustic sources, with a bit stronger (on a control perspective) variation available with the second model.

Third one could be more interesting on groups, mixes.

Transformers used to be designed for the least possible character and dynamic range, of course. They are colours, today. The main limit (old perspective) and character (modern perspective) come probably from the material the core is made of. The core fills the space between the windings, affecting the behaviour and the strength of the magnetic coupling. The most interesting part of this coupling is magnetic saturation. It has both memory and frequency-dependency, both parts of what „musical“ is.

Some materials go into saturation slowly and gradually, while others do it fast and abruptly. Similar to level saturation, tubes vs transistors, but the comparison ends here. Transformers became so interesting today because they can add their kind of colour no other thing adds.

Active circuits, transformers, speakers (thinking of guitar amps) are three kinds of colours which are not comparable because they do competely different things in different ways.

An audio transformer has a strongly frequency-dependent saturation, with low freqs saturating more because of their higher energy and ruling over the full signal because they distort more but saturation affects the overall level, in a weird way: for example, level can be reduced below lower level input.

Transformer and circuits interaction do it but I think it gives the idea. Three tranformers are included here, from mellow to modern and strong.

Select the steel one for most character, nickel for less character. Manage gain staging for more or less colour. Steel is probably more interesting on single sources, guitars, drums. Nickel on mixes.Always compare wet to dry because you could easily loose dynamics while overdoing it.