Martin
PRAGUE, CZECH REPUBLIC: small, independent development teams federation United Plugins is proud to announce availability of founding partner SounDevice Digital’s DIFIX — deploying several sophisticated independent processes to triumph over audio interface imperfections arising from their instrument input impedance not necessarily being as high as claimed when trying to directly record electric guitar or bass (which would possibly result in a dull sound with a loss of brilliance) by levelling the sound and adding a little analogue-style saturation so as to effectively work as a DI box-emulating plug-in — as of December 9… 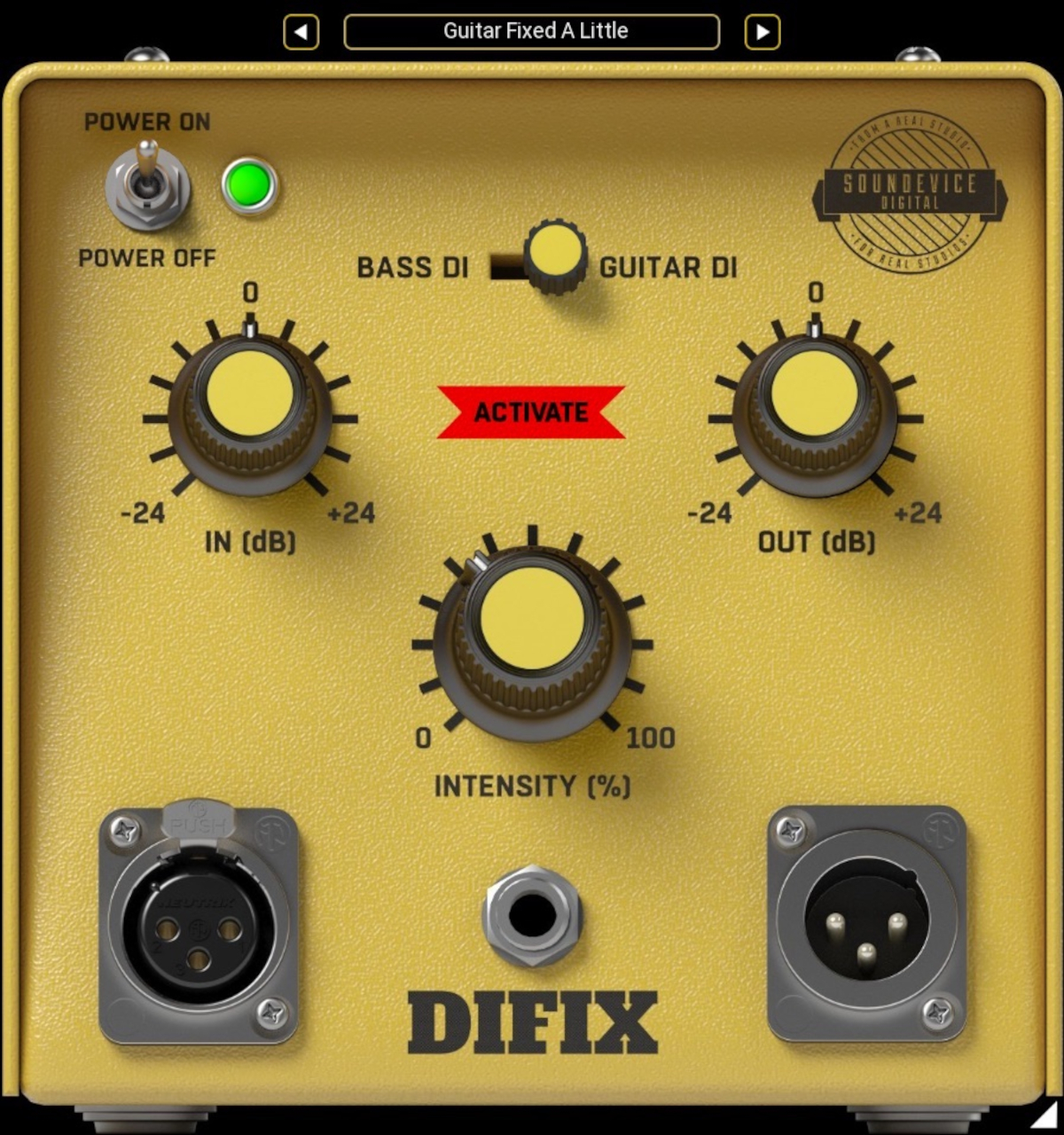 By being born out of necessity in renowned recording studios such as Detroit’s Motown and United Sound Systems to accommodate amplifying emerging electric musical instruments — in particular electric guitars in the mid Sixties, the humble DI (Direct Input) box began by resolving a basic mismatch between electrodynamic guitar pickups and sensitive studio electronics. Even today, despite more modern DI boxes being far more sophisticated than those trailblazing ‘Motor City’ models, their primary function is still to take an unbalanced, high-impedance signal and convert it to a balanced, low-impedance signal, so running guitars or basses directly into mic preamps or sending signals over extended cable runs without losing volume and significant high-frequency information is possible. Progress breeds change, clearly, yet even up-to-date DAW (Digital Audio Workstation) recording setups can sometimes suffer from imperfections arising from trying to directly record an electric guitar or bass by plugging it in to an audio interface’s instrument input whose impedance is not necessarily as high as claimed. Consequently, the connected instrument in question’s pickups do not work as well as they should, so results in a poor-sounding direct recording. Time to buy a DI box, perhaps? Not necessarily, since SounDevice Digital has an alternative software solution.
SounDevice Digital’s DIFIX deploys several sophisticated independent processes to level the sound and add a little analogue-style saturation so as to effectively work as a DI-box-emulating plug-in. Put it this way: with all the science effectively hidden behind a readily resizable photorealistic GUI (Graphical User Interface) that is as easy on the eye as it is easy to use, ultimately using it is hardly rocket science. Switch between BASS DI or GUITAR DI to change the internal algorithms to best fit the incoming signal when recording bass or guitar, with the former improving missing bass guitar frequencies while the latter is tuned to be used with electric or electro-acoustic guitar, then decide how much DIFIX should improve the signal using some simple self-explanatory controls — namely, INTENSITY (%), which blends the dry and wet signals (with the maximum — 100 — setting allowing only the processed signal to go to the output, while lower values add the original untreated signal to the blend); IN (dB) is basically a gain input (controlling how much signal is being fed into the DIFIX plug-in and how its processing will react, ranging from -24 to +24 decibels); and OUT (dB) boosts the output signal (by between -24 to +24 decibels).
DIFIX is intended, admittedly, as an accessible tool to assist anyone recording in home studios with low-cost audio interfaces, but bear in mind that those with access to more costly hardware DI boxes benefit from fixing the input here and there as well, where the question remains: not if but how much? It is important to get that first step right when recording a guitar track in a DAW, otherwise trying to make a bad-sounding guitar track better becomes a whole lot harder — if not impossible — task. Therefore, DIFIX should be inserted as the first plug-in on a guitar track to fix input imperfections, followed by any guitar and amp simulation plug-ins favoured by the user to shape their guitar tone. To be fair to DIFIX, while it can fix a lot — letting users salvage or remix old recordings, for example — with a few simple controls, anyone serious about direct recording with an audio interface should probably purchase a decent DI box and use it in combination with DIFIX.
But better still, SounDevice Digital’s DIFIX plug-in provides pre-eminent audio quality, utilising internal 64-bit processing, and can capably handle any sampling rate — right up to 192 kHz (or even higher). Having said that, it intelligently handles bypassing to ensure that there are no nasty clicks or harmful noises when automating the parameter and also compensates for latency by ensuring that the bypass states are perfectly in sync with each other. On top of that, the plug-in intelligently detects whether it makes sense to perform processing at all. And if not, it temporarily turns on sleep mode, meaning CPU (Central Processing Unit) usage is reduced to almost nothing, so saving valuable computing resources for other processes.
Fixing foulups without (necessarily needing) a dedicated DI box, DIFIX effectively runs several several sophisticated independent processes to restore a loss of brilliance to directly-recorded electric guitars or basses while also adding decent-sounding analogue-style saturation and fatness, itself acting as a great start for re-amping duties. Despite being SounDevice Digital’s first dedicated effect for electric and bass guitars, it is definitely not its last with something set to be used in combination with DIFIX due to make an appearance… watch this space!
SounDevice Digital’s DIFIX is available to purchase for a time-limited introductory promo price of €19.00 EUR until January 3, 2021 — rising thereafter to its regular price of €49.00 EUR — as an AAX-, AU-, VST-, and VST3-compatible audio plug-in directly from United Plugins here: https://unitedplugins.com/DIFIX/ (A 15-day, fully-functional trial version for macOS and Windows can be downloaded for free from here: https://unitedplugins.com/download/)
Note that no iLok, dongle, or internet access is required for DIFIX activation. (All United Plugins software uses license files for activation and owners can freely use purchased software on all their computers as long as they are the user.)
Watch United Plugins’ informative introductory video for DIFIX here: https://youtu.be/QWq2eWCCrgA