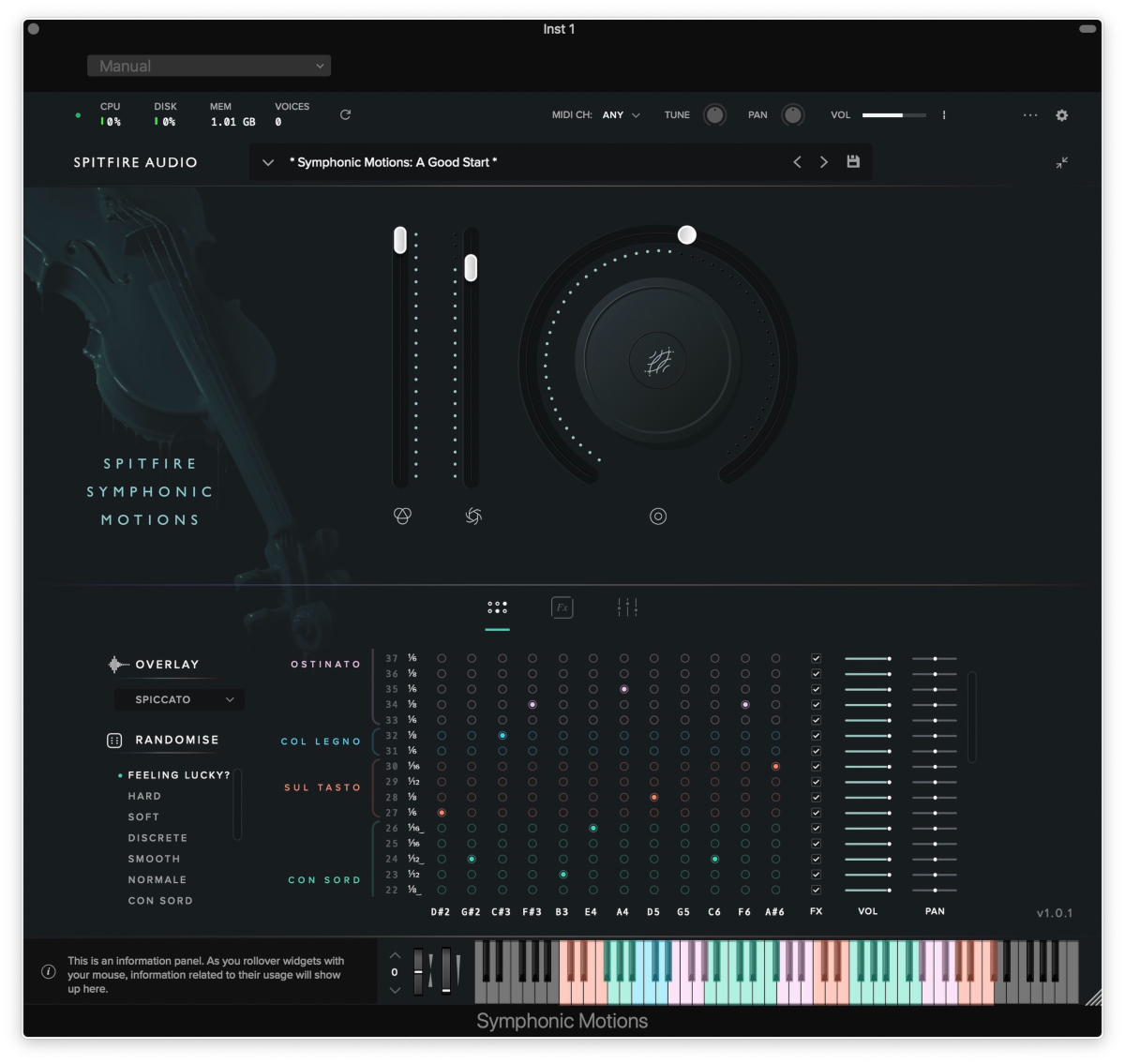 Put simply, SPITFIRE SYMPHONIC MOTIONS makes it easy to create sophisticated-sounding combinations of rhythms and playing techniques to elevate scoring, solving a common problem with virtual string instruments in the process — pulling off realistic rebowing. By being recorded in the same space with the same world-class players and attention to detail, this inspiring tool perfectly complements Spitfire Audio’s acclaimed SYMPHONIC… and CHAMBER… range, yet is equally inspiring when used on its own, adding depth, momentum, and texture to cinematic compositions.
Central to SPITFIRE SYMPHONIC MOTIONS’ modus operandi is Spitfire Audio’s bespoke Grid interface — inspired in no small part by the British-built EMS VCS3, which made musical history upon its introduction in 1969 by being the first commercially portable synthesiser available anywhere in the world, thanks to its innovative modular matrix-based patchboard dispensing with the telephone exchange-like cabling of other (much larger) modular systems in favour of making space-saving connections with (removable) coloured pegs — allowing adventurous users to place ‘pegs’ via an onscreen 12- x 40- positional grid arrangement, accessing recordings across 12 intervals with wide-ranging configurational possibilities. Put it this way: with this arrangement it is easy to quickly create expressive, intricate, and realistic rhythmic strings. Simply choose from an essential selection of OSTINATO (motif or phrase that persistently repeats in the same musical voice, frequently in the same pitch), COL LEGNO (striking strings with the wood of the bow), SUL TASTO (bowing on the fingerboard), and CON SORD (with mute) playing techniques, then combine these with short OVERLAY techniques — such as SPICCATO (in which the bow appears to bounce lightly upon the string) — for accents and blending to create a more nuanced, dynamic sound. Furthermore, four different rhythms — 1⧸6 (6ths), 1⧸8 (8ths), 1⧸12 (12ths), and 1⧸16 (16ths) — with discrete/staccato and smooth/legato phrasing options are available, all locked to tempo in the host DAW (Digital Audio Workstation). It is as easy as instantly selecting which technique sits on each of those 12 key ranges, toggling the pegs, or choosing RANDOMISE to generate randomised combinations for instant inspiration.
It goes without saying, almost, that anyone chasing after a blockbuster sound must go bold. By that same token, then, anyone seeking cinematic- sounding results must go big. Indeed, it doesn’t get much bigger or more cinematic-sounding than Lyndhurst Hall — built in 1884 by Alfred Waterhouse, architect of the Natural History Museum, and now one of the world’s largest recording rooms, able to accommodate a full symphony orchestra and choir simultaneously, with an inspiring acoustic adored by musicians the world over since being opened as such in 1992 by none other than English record producer, arranger, composer, conductor, musician, and audio engineer extraordinaire George Martin, often referred to as the ‘Fifth Beatle’ in deference to his extensive involvement on each of The Beatles’ original albums. Among the many Oscar-winning and -nominated works recorded in the Hall — heard in cinemas and homes across the globe — are the scintillating scores to the highest-grossing blockbusters, including the Harry Potter film series (John Williams, Patrick Doyle, Nicholas Hooper, and Alexandre Desplat), The Dark Knight (Hans Zimmer and James Newton Howard), and Atonement (Dario Marianelli), to name but a few outstanding orchestral examples.
Cinematic composition is the answer and Spitfire Audio knows that for sure — hence helpfully setting symphonic strings in motion for what was literally to become SPITFIRE SYMPHONIC MOTIONS by capturing the stunning performances of the same first-call session players used in its SYMPHONIC… range in the hallowed (Lyndhurst) Hall at London’s legendary AIR Studios, sampled with the sound-specialising British music technology company’s usual more is more approach by Jake Jackson, Chief Engineer and Associate Producer for Spitfire Audio, and an award-winning recording and mix engineer/producer with wide- ranging film, television, and computer game soundtrack — and, more recently, album — credits to his notable name. As a finished product par excellence, SPITFIRE SYMPHONIC MOTIONS makes available a choice of six signals, including close tree and ambient mics, as well as three carefully curated mixes.
Making moving string performances perfectly playable, SPITFIRE SYMPHONIC MOTIONS surely succeeds in its mission of helping composers with bringing realism to their compositions since it really does capture some of the best string players in the world performing together to create sophisticated- sounding combinations of rhythms and playing techniques to elevate scoring as an inspiring tool designed by composers for composers.
SPITFIRE SYMPHONIC MOTIONS is available as an AAX-, AU-, VST2-, and VST3-compatible, NKS-ready plug-in that loads directly into a DAW (Digital Audio Workstation) for a time-limited introductory promo price of £149.00 GBP (inc. VAT)/$199.00 USD/€199.00 EUR (inc. VAT) until July 30, 2020 — rising thereafter to a MSRP (Manufacturer’s Suggested Retail Price) of £199.00 GBP (inc. VAT)/$249.00 USD/€249.00 EUR (inc. VAT) — from here: https://www.spitfireaudio.com/shop/a-z/spitfire-symphonic-motions/
A promo-priced crossgrade offer of £119.00 GBP (inc. VAT)/$149.00 USD/€149.00 EUR (inc. VAT) for SPITFIRE SYMPHONIC MOTIONS, representing 40% off the MSRP, is available to owners of one or more of the SPITFIRE SYMPHONIC STRINGS, SPITFIRE SYMPHONIC STRINGS EVOLUTIONS, SPITFIRE CHAMBER STRINGS, and SPITFIRE CHAMBER STRINGS PROFESSIONAL sample-based virtual instrument libraries until July 30, 2020, rising thereafter to a post-promo-priced crossgrade offer of £179.00 GBP (inc. VAT)/$224.00 USD/€224.00 EUR (inc. VAT), representing 10% off the MSRP.
Spitfire Audio’s Library Manager application allows anyone to buy now and download anytime, and is available for free from here: http://www.spitfireaudio.com/info/library-manager/
For more in-depth information, including some superb-sounding audio demos, please visit the dedicated SPITFIRE SYMPHONIC MOTIONS webpage here: https://www.spitfireaudio.com/shop/a-z/spitfire-symphonic-motions/
Watch Spitfire Audio co-founder and composer Paul Thomson’s ‘traditional’ walkthrough of SPITFIRE SYMPHONIC MOTIONS here: https://youtu.be/c0KpvEY6Gxc
Watch Spitfire Audio’s musically moving trailer video for SPITFIRE SYMPHONIC MOTIONS here: https://youtu.be/W8Sb6ff8PYg