Martin
LONDON, UK: sound-specialising British music technology company Spitfire Audio is proud to announce availability of DRUMLINE — the eighth release in its ongoing ORIGINALS series of instant library tools with the same outstanding recording quality as the ‘full-blown’ blue-chip libraries with which it has built its reputation, simplified and presented in its free, easy-to-use plug-in, this time collaborating with the Bleeding Fingers Music composer collective (created as a joint venture between composer Hans Zimmer, his business partner Steve Kofsky, and Extreme Music, the production arm of Sony/ATV Music Publishing as the television and film industry’s leading custom scoring company) to work with world champion drum corps The Blue Devils, recorded by Bleeding Fingers Music CEO Russell Emanuel in the controlled acoustics of FOX’s famed Newman Scoring Stage in Los Angeles, CA, USA, for a tight, focused sound served up alongside variable effects as nine presets featuring ~1.5GB of sampled snares, tenor drums, bass drums, and cymbals with five straightforward NKS (Native Kontrol Standard) compatible controls, creating the spirit of the stadium — as of December 21… 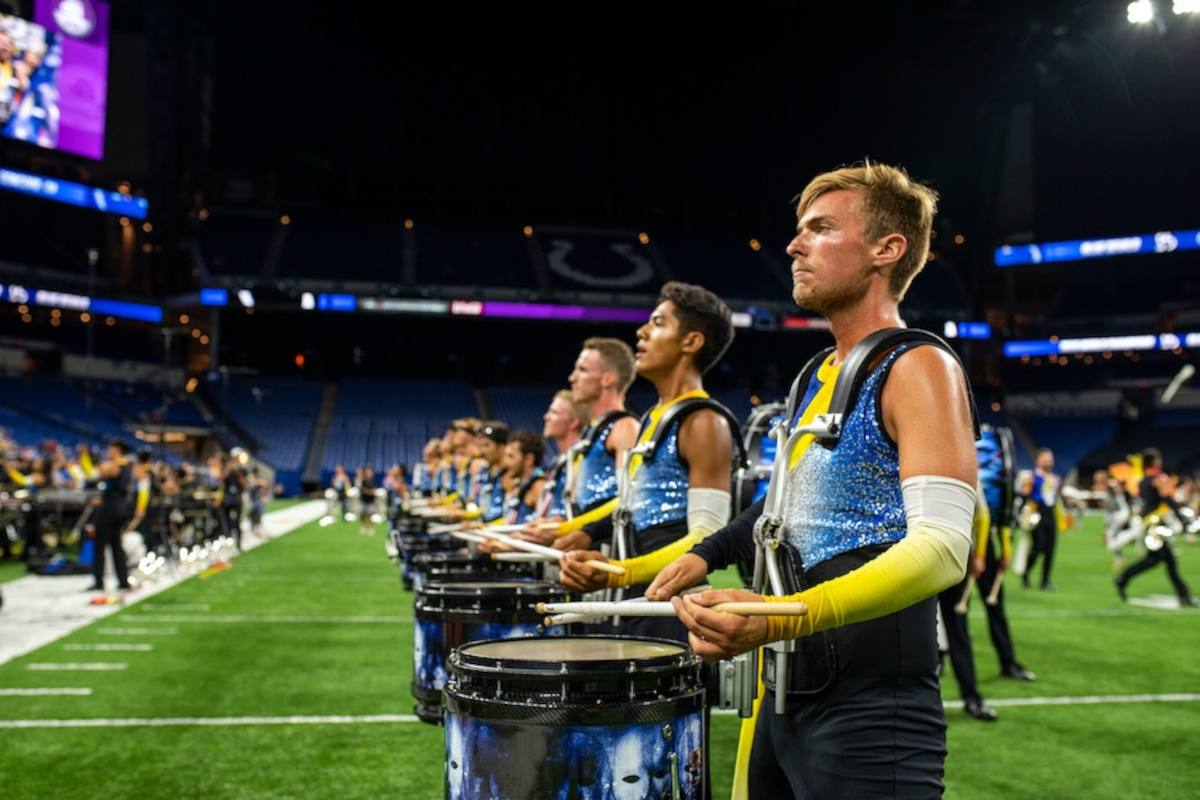 Spitfire Audio initiated its (ongoing) ORIGINALS series when releasing EPIC STRINGS — an aptly-named symphonic-sized, 60-strong string section of London’s best players professionally recorded in the hallowed (Lyndhurst) Hall at London’s legendary AIR Studios, serving up 11 appetising articulations as a wallet-friendly yet eminently essential cinematic ingredient for any professional or budding professional composer and music-maker — to widespread critical acclaim in November last year, successfully followed throughout this year by EPIC BRASS & WOODS, FELT PIANO, CINEMATIC PERCUSSION, CINEMATIC SOFT PIANO, INTIMATE STRINGS, FIREWOOD PIANO, and, now, the also-aptly-named DRUMLINE. Duly delivering the precision and excellence of The Blue Devils drumline to the fingertips of music producers, film composers, and percussion arrangers as the latest in a lengthening line of instant library tools with the same outstanding recording quality as the ‘full-blown’ blue-chip libraries with which Spitfire Audio has built its reputation, simplified and presented in its free, easy-to-use plug-in, DRUMLINE allows its users to harness the spirit of the stadium with a collection of sounds that are guaranteed to add depth and impact to musical projects, freed from the sporting stadiums that its namesake drumline have so successfully performed within to so many for so long.
Let us step back, briefly, in time, then, to — technologically and musically — make our way forward. Founded in 1957, The Blue Devils drumline and Bugle Corps is a world-renowned marching music ensemble based in Concord, CA, USA. Ultimately spending summers travelling throughout the USA as a talented group of brass, percussion, and colour guard members, competing and performing for millions of fans in massive stadiums, it is the most decorated ensemble in DCI (Drum Corps International) history, having won the World Championship title an unprecedented 19 times — a record that stands as an envied accomplishment in the drum corps community. Furthermore, finishing first or second in national competitions during the past 13 seasons and placing no lower than fifth since earning third place in 1975, The Blue Devils’ performance pedigree extends beyond the USA with well-known international performances and outreach in Europe, Japan, South Africa, and beyond. But working with world-renowned sound-specialising British music technology company Spitfire Audio to create DRUMLINE is audibly a whole new ballgame!
BD Performing Arts CEO Shaun Gallant says, “This has been a very exciting project for us to work on with Spitfire Audio. They are truly the best in the business, and we’re so thankful for this opportunity to partner with them in providing top-of-the-line tools for arrangers and producers everywhere. We want to extend a special thanks to producer Russell Emanuel and the team at FOX’s Newman Scoring Stage for hosting our session with Extreme Music in preparation for this project. What’s even more exciting is this is only the beginning of what is sure to be an incredible partnership. We can’t wait to see what opportunities the future presents.”
Putting it this way, Spitfire Audio co-founder and composer Paul Thomson responds in kind: “At Spitfire Audio we take pride in working with the most talented musicians and artists in the world. We’re enormously excited to be releasing DRUMLINE with the exceptional players from The Blue Devils. Our mission is to inspire a generation of composers and, working with The Blue Devils and producer Russell Emanuel, we’ve created something that is going to inspire composers of all ages to learn more about this exciting musical genre!”
DRUMLINE is available as an AAX-, AU-, VST2-, and VST3-compatible plug-in supporting Native Instruments’ NKS (Native Kontrol Standard) for Mac (OS X 10.10 or later) and Windows (7, 8, and 10 — latest Service Pack) that loads directly into any compatible DAW (Digital Audio Workstation) for an RRP (Recommended Retail Price) of only £29.00 GBP (inc. VAT)/$29.00 USD/€29.00 EUR (inc. VAT) — from here: https://www.spitfireaudio.com/originals
Spitfire Audio’s namesake Spitfire Audio application allows anyone to buy now and download anytime, and is available for free from here: http://www.spitfireaudio.com/info/library-manager/
For more in-depth information, please visit Spitfire Audio’s ORIGINALS Frequently Asked Questions webpage here: https://www.spitfireaudio.com/info/faq/spitfire-originals/
Feel the spirit of the stadium while watching Spitfire Audio’s DRUMLINE trailer video showcasing its stirring sounds here: https://youtu.be/PvXiN2oDbP8