Home PR in english Unfiltered Audio LION lets users synthesize like a King, roaring into release with Plugin Alliance as a versatile VI

Unfiltered Audio LION lets users synthesize like a King, roaring into release with Plugin Alliance as a versatile VI

Martin
SANTA CRUZ, CA, USA: Plugin Alliance, supporting all major plugin formats and uniting some of the best-known international audio companies under one virtual roof, is proud to announce availability of LION — latest release from fellow Californian company and plugin-creating partner Unfiltered Audio that this time sees it welcomed to the synthesis jungle with the King of soft synths, an extraordinarily deep VI (Virtual Instrument) anchored around an easy- to-use interface providing everything needed for quick patching, endless experimentation, and intuitive sound design — as of September 17… 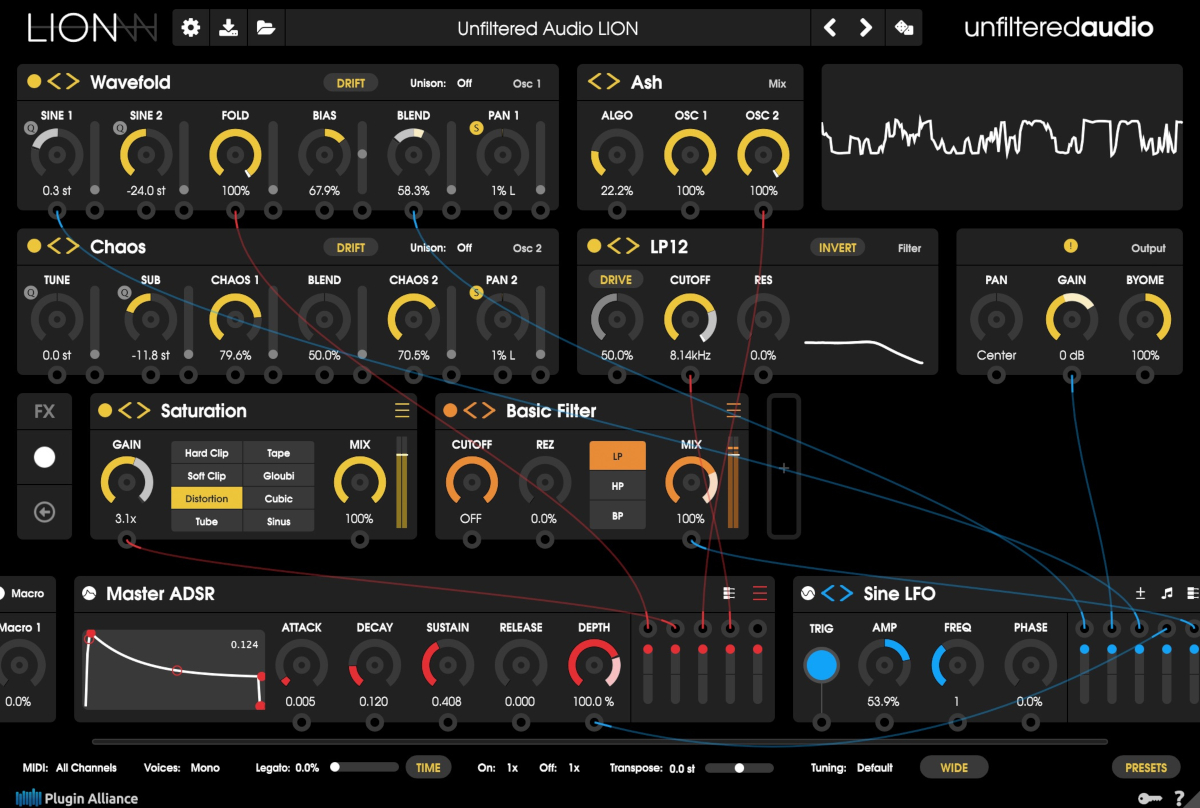 Unfiltered Audio advanced audio processing plugins by developing some of the most innovative and forward-thinking tools in the world. With the cutting- edge Californian company’s groundbreaking first foray into the wonderful world of software synthesizers similarly scaling new heights, it is set to become the King of the synthesis jungle! Jesting apart, LION is an extremely versatile synthesizer with a very simple signal path, putting two oscillators through a mixer and running them through a filter — much like a traditional subtractive synthesizer. Saying that, LION is far from traditional in its exotic execution, however, effectively encouraging endless experimentation in typical Unfiltered Audio innovative and forward-thinking fashion.
For below LION’s hood hides a dual-oscillator architecture with each oscillator featuring 26 modes, ranging from familiar classics to unique oscillators found nowhere else — pick and choose from FM (Frequency Modulation) synthesis, subtractive or additive waveforms, ‘super’ oscillator stacks, microsound, noise, or variations on each! All algorithms have been specifically designed for deep modulation. Moreover, each oscillator engine features an optional Stereo mode, whereby WIDE images are available at the synthesis level. LION lets users thereafter take advantage of its deep Unison manipulation of every parameter and (optional) tuning DRIFT for creating rich, full, and lush sounds using the oscillators alone — and all before starting to reach for any external effects!
LION is also rather unique in the way that it turns oscillator mixing into another opportunity for creative synthesis since the Mix(er) offers distinct modes for combining the two oscillators (OSC 1 and OSC 2) in ways not seen in any other synthesizer! The default algorithm (ALGO) acts as a standard crossfader while more experimental modes all create non-standard relationships between the two oscillators themselves. These include: Bitter (bitwise operations are applied to the oscillators); Ash (various sample-and-hold algorithms are applied to the oscillators); Ring Mod (the two oscillators are ring modulated together); Min-Max (amplitudes of the two oscillators are analysed and the minimum and maximum values are found between the two with the mixer then crossfading between them); Terrain (a series of wave terrains are created that are then navigated by the two oscillators); and Compare (comparisons are found between the two oscillators). Obviously all lead to truly stunning sounds!
Still better, Unfiltered Audio’s acclaimed modulation system is integrated into LION, but better than ever! It includes a massive MIDI Input modulator that translates playing into numerous opportunities for deep expression — users can control the filter CUTOFF knob with the last MIDI note value or modulate the oscillators’ timbre through V (velocity) control, for instance. Indeed, full MPE (MIDI Polyphonic Expression) support permits using ROLI Seaboard or Sensel Morph next-generation MIDI controllers for phenomenal per-voice articulation!
LION lends itself to creatively crafting powerful sounds that feel as though they were produced by a colossal chain of plugins, tabs, and automation — and all from within its innovative single-screen GUI (Graphical User Interface) with clear, intuitive controls. Clearly, time is better spent focusing from the outset on the musical job at hand by harnessing LION’s king-sized sonic complexity and versatility, rather than resorting to watching time-consuming tutorials to learn the intricacies and hidden features of a badly-executed synth — software based or otherwise.
Other soft synths may well only provide a small library of forgettable effects almost as an afterthought, yet LION lets users ditch the need for external effect plugins, should they wish, with Unfiltered Audio’s already-legendary BYOME effect row also integrated as a flexible library of over 40 modulatable effects. LION’s synthesis engines and BYOME processing engine all have access to the same modulation sources, so users can create complete presets with detailed effect chains that react to their playing.
Possibilities are truly endless — enter LION’s fruitful factory library of nearly 600 presets spanning many musical genres and styles to hear how powerful the King of the synthesis jungle is in action! Ask award-winning composer, musician, technologist, and creator BT. After all, he has become well versed in LION, having already attended a successful ‘synth tasting’ event hosted by Plugin Alliance at Sphere Studios in North Hollywood earlier this year, where a prerelease was showcased to industry insiders and fellow electronica luminaries like Paul Haslinger (ex-Tangerine Dream) and Tom Holkenborg (a.k.a. Junkie XL) to critical acclaim. All three talented musicians happen to be also award-winning modern music-to-picture scoring specialists, so surely know somewhat more than a thing or two about standout synthesized sound between the three of them!
Unfiltered Audio’s LION is available for purchase — as an AAX Native-, AU-, VST2-, and VST3-supporting Virtual Instrument plugin for MacOS (10.9 through 10.14) and Windows (7 through 10) — exclusively from distribution partner Plugin Alliance for an introductory price of $169.00 USD until September 30, 2019, rising to an MSRP of $199.00 USD thereafter — from here: https://www.plugin-alliance.com/en/products/unfiltered_audio_lion.html
A fully-functional, 14-day trial is available to anyone registering for a free Plugin Alliance account here: http://www.plugin-alliance.com/en/registration.html
Unfiltered Audio LION is included in Plugin Alliance’s new MEGA Bundle (https://www.plugin-alliance.com/en/products/pa-mega-bundle-monthly.html) and Unfiltered Audio Bundle (https://www.plugin-alliance.com/en/products/unfiltered_audio-bundle-monthly.html) monthly — and annual — subscriptions at no extra cost!
Note that the proprietary Plugin Alliance Installation Manager means users can select, download, and install only the products and formats needed for their system.
For more in-depth information, including several superb-sounding audio demos, please visit Plugin Alliance’s dedicated LION webpage here: https://www.plugin-alliance.com/en/products/unfiltered_audio_lion.html
Watch an informative, in-depth video overview of Unfiltered Audio’s LION by professional sound designer and programmer John ‘Skippy’ Lehmkuhl (PlugInGuru) here: https://youtu.be/KJqA8W2TuPc
Watch Plugin Alliance’s play-through video for Unfiltered Audio’s awe-inspiring LION here: https://youtu.be/Eg17YlD2ALQ
Watch Plugin Alliance’s teaser video for Unfiltered Audio’s awe-inspiring LION here: https://youtu.be/8hyYsLVrA70