GRENOBLE, FRANCE: music software company XILS-lab is proud to announce availability of XILS Vocoder 5000 — inspired by its expensive EMS Vocoder 5000 hardware (partial) namesake (still held high in analogue awe) as an awe-inspiring, affordable vocoder plug-in for Mac (32- and 64-bit, AU, AAX, RTAS, VST 2.4, and VST 3 for Mac OS X 10.6 or higher) and PC (32- and 64-bit, AAX, RTAS, and VST for Windows XP, Vista, 7, and 8) — as of December 23…  By (typical dictionary) definition, a vocoder is an analysis and synthesis system used to reproduce human speech. Speaking historically, Homer Dudley, a research physicist at Bell Laboratories in New Jersey, USA, developed the Voice Operated reCOrDER (VOCODER) way back in 1939 as a research device to test compression schemes for the secure transmission of voice signals over copper telephone lines. Later, Werner Meyer-Eppler, the Director of Phonetics at Bonn University in Germany, recognised the relevance of these machine marvels to electronic music following a visit by Dudley in 1948, subsequently using the vocoder as a basis for future writings which would inspire, in turn, the German Elektronische Musik movement. 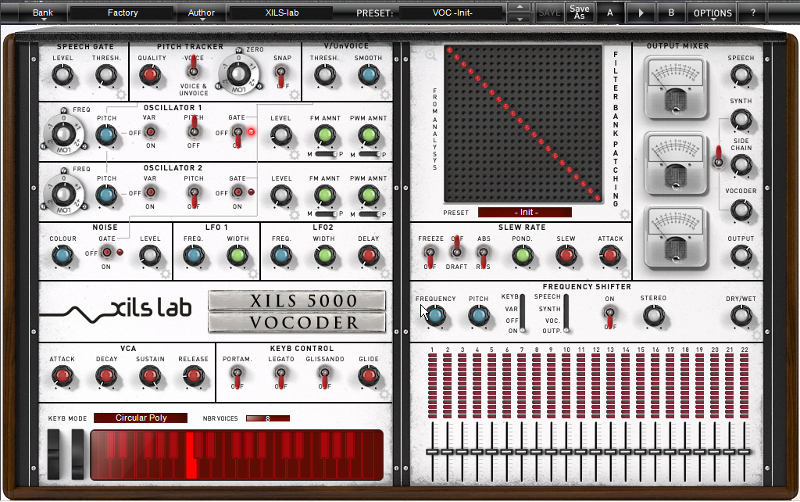 Musically speaking, the vocoder is indebted to German synth pop pioneers Kraftwerk more than most for bringing its distinctive robotic-sounding voice into commercial consciousness — so much so that Wikipedia even has a photograph of one of their early-Seventies custom-built vocoders alongside its own online definition of the word.  Whatever way one views it, actually it was Peter Zinovieff’s London-based company EMS (Electronic Music Studios) — best known for making musical history in 1969 with its introduction of the VCS3, the first portable synthesiser commercially available anywhere in the world — who released the world’s first commercially-available vocoder, the EMS Studio Vocoder, in 1976. Soon renamed the EMS Vocoder 5000, this vocoder par excellence ended up in the talented hands of a privileged few, both musical or otherwise, including Kraftwerk, predictably; Stevie Wonder; US Seventies-vintage sci-fi TV series classic Battlestar Galactica (‘Cylon’ centurion voices); and the BBC Radiophonic Workshop. With its 22-band analysis and synthesis sections, the EMS Vocoder 5000 is probably the most highly-specified such unit ever produced. The fact that it can still be bought new today is testament to its still-stunning design, though there is only one (not so small) problem: purchasers should be prepared to part with a handsome five-figure sum for the privilege and then wait quite some considerable time to take delivery of this weighty (20kg) vocoding heavyweight. However, XILS-lab has an answer to that problem: now those fantastic features and more can be accessed instantly in the comfort of your computer at a fraction of that cost, thanks to the XILS Vocoder 5000 plug-in!  Put simply, XILS-labs’ software-based vocoder virtually emulates the fanciful filtering techniques and incredibly complex circuitry of its analogue predecessor to achieve the same organic sound, precision, and clarity. Just like the EMS Vocoder 5000 before it, XILS Vocoder 5000 can be made to ‘speak’ clearly in English and German — just like Kraftwerk… or in any other language for that matter! Respectively resurrecting the still-sought-after sounds of the EMS VCS3 synthesiser and Roland VP-330 Vocoder Plus keyboard in popular plug-in form as XILS 3 and XILS V+ certainly stood XILS-lab in good stead when it came to meaningfully modelling the EMS Vocoder 5000’s impressive feature set of no fewer than 22 bandpass filters and envelope followers; oscillators (modelled from the EMS VCS3); noise generator; frequency shifter; and spectrum analyser — including its distinctive 22×22 pin matrix patchboard, allowing any band of the modulator signal to be connected to any band of the carrier signal. So while analogue vocoders like the esteemed EMS Vocoder 5000 typically analyse an incoming signal by splitting it into a number of tuned frequency bands with modulator and carrier signals being sent through a series of tuned bandpass filters — in the case of Kraftwerk’s beloved robotic voices, for example, the modulator is a microphone and the carrier is a noise or sawtooth waveform — with XILS Vocoder 5000 it’s just the same.  Saying that, XILS-lab being XILS-lab, that’s not all. Additional features that make XILS Vocoder 5000 a truly 21st Century product par excellence in its own right include additional filter types; more SLEW RATE modulations; two LFOs — the original Vocoder 5000 had only one; in-depth FM AMNT (Frequency Modulation amount) and PWM AMNT (Pulse Width Modulation amount) controls; additional oscillator waveforms; improved SPEECH (sibilance) input detector; GATE input; and also a keyboard for playing melodies or chords. Unlike the restrictive nature of the original Vocoder 5000’s ‘real world’ pin matrix patchboard, XILS Vocoder 5000 users can quickly populate its onscreen matrix by freely drawing lines… and it helpfully has its own presets! Picture-perfect, some might say!  So there it is. As well as feeding the human voice — truly the most variable sound source of all — into XILS Vocoder 5000 to alter its pitch, tone, vibrato, and other characteristics to synthesise a choir from a single voice or create musical melodies from ordinary speech, why not use XILS Vocoder 5000 to process drums, percussive elements, guitars, or any kind of synthesiser to breathe new ‘analogue’ life into them or reshape them totally? Try creating vocoded synth patterns from drum loops… loopy! Almost anything is musically possible with XILS Vocoder 5000, so why not give it a try today? Here at XILS-lab we’re sure you’ll love its authenticity, adaptability, and affordability.