Martin
KINGSWINFORD, UK: British boutique electronic instruments innovator Analogue Solutions is proud to announce availability of Leipzig v3 — an advanced Analogue Synthesiser stylishly reshaped as a desktop design drawing deeply from the DNA of the rack-mountable Leipzig-S analogue synth/sequencer, a discontinued design dating back to 2011 and effectively now made better by redesign to improve reliability, quality, and other manufacturing considerations, as well as adding several notable new features — as of April 5… 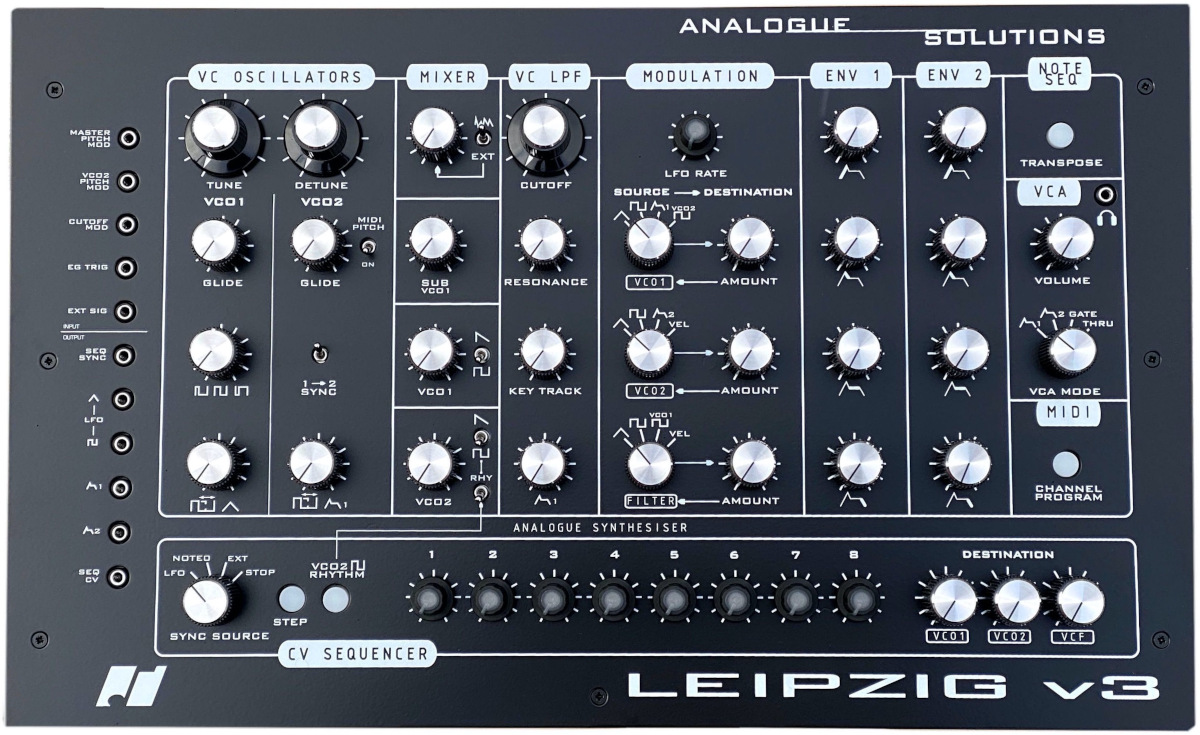 As a desktop device duly delivering a better fit, format-wise, for present-day production preference, Leipzig v3 takes its (re)design cues from Analogue Solutions’ 2019-introduced Impulse Command — critically acclaimed as a true stereo, semi-modular analogue synthesiser/sonic realiser conceivably capable of sounding like several synthesisers simultaneously playing, perfectly-packaged as a desktop device — yet readily retains the same angry, analogue sound as its rack-mountable (Leipzig-S) predecessor, popularised itself by bona fide synth-pop pioneer Vince Clarke, long-standing Gary Numan producer Ade Fenton, and Nine Inch Nails main man Trent Reznor, all appreciative of the pure analogue voice and modulation circuitry — circuits based on superlative-sounding Seventies-vintage designs, so no quantisation for CPU (Central Processing Unit) reading required, in other words — with extensive routing possibilities, fat-sounding Moog-style filter, two VCOs (Voltage-Controlled Oscillators), and analogue step sequencer on offer to discerning disciples, distinguished or otherwise.
Obvious change of form factor duly dealt with, several notable features new to the resulting (non-rack-mountable) Leipzig v3 desktop design are well worth highlighting here from the get-go. Firstly, flexibility is increased when accessing a healthy number of self-explanatory CV (Control Voltage) patch points positioned directly on the top panel as Eurorack patch cable-compatible 3.5mm mini (mono) jack sockets, so Leipzig v3 can be both cross patched within itself and also to external Eurorack modular synthesisers. Increased INPUT connectivity comes courtesy of MASTER PITCH MOD — modulates the pitch of both VCOs; VCO 2 PITCH MOD — modulates the pitch of VCO 2 only; CUTOFF MOD — modulates the VC LPF (Voltage-Controlled Low-Pass Filter) CUTOFF frequency; EG TRIG — triggers both (ENV 1 and ENV 2) envelope generators (upon receiving a trigger or gate signal); and EXT SIG (external signal) — an audio signal (routed to the MIXER via an associated EXT switch) or clock signal (used to clock the CV SEQUENCER from an external device when the SYNC SOURCE selector is turned to EXT). Equally accessible are the following OUTPUT-dedicated patch points: SEQ SYNC — similar to a through clock, copying the clock signal selected to clock the CV SEQUENCER, so it can be ‘thru-d’ to another device to synchronise them together; LFO triangle and square signal outputs; envelope generator 1 and 2 signal outputs; and SEQ CV — control voltage output from the CV SEQUENCER.
Speaking of the latter, the capabilities of an already-capable eight-step analogue sequencer — surely wasted when only used to create simple- sounding (MIDI-transposable) melodies or percussive loops when it can also act as a musical modulation source to step through striking sound changes (courtesy of the output CV being routed to VCO 1 pitch, VCO 2 pitch, and VCF cutoff with associated adjustable DESTINATION levels) — have helpfully been extended to turn off VCO 2 (square wave only) on selected steps by activating the RHY(thm) toggle switch and manually stepping through the CV SEQUENCER using the STEP push button, then toggling VCO 2 on or off using the RHYTHM push button; consequently, VCO 2 will only sound when the RHYTHM button LED (Light Emitting Diode) is lit, which, when used in conjunction with VCO 1 still sounding on every step, creates the illusion of more than one synthesiser playing! But briefly stepping out of the wonderful world of analogue, Leipzig v3 also has a ‘hidden’ dynamic (digital) 16-step sequencer that constantly stores every note played in via MIDI into volatile memory as a 16-step loop. It is always locked in sync with the analogue sequencer and new notes can be entered into the 16-step loop while the sequencers are running, permitting patterns to be constantly changed on the fly. Straightforward synchronisation of the sequencer to a DAW (Digital Audio Workstation) is perfectly possible by simply sending it MIDI Note 000; as such, it can be clocked at any tempo (and also divided down relative to the DAW’s tempo), stopped, started, and muted from the DAW itself — impossible with MIDI Sync, so something of an added bonus in itself for Leipzig v3 owners.
Other tweaks to the contemporary desktop design implemented in Leipzig v3 are comparatively subtle, such as a top panel-positioned (3.5mm mini jack) headphone output and rear panel-positioned power switch that is illuminated.
Illuminating additions aside, although Leipzig v3 clearly comprises some special features, fortunately its general architecture, signal flow — VC OSCILLATORS > MIXER > VC LPF > MODULATION > ENV 1 > ENV 2 > VCA, et al — and control nomenclature is still fairly standard, so the synthesiser itself is fairly straightforward to use.
Ultimately, Leipzig v3 sounds huge — especially evident when pressed into playing bass parts, at which it really reigns supreme. Sonic enrichments further abound as the MIXER and VC LPF sections can both be really overdriven, lending Leipzig v3 a really hard sound. Saying that, this of course can be toned down and softer synth sounds are also achievable — as, indeed, is everything in-between. Besides bass sounds, Leipzig v3 equally excels at creating electronic percussion — not just sounds, but also percussive loops, thanks to the flexibility of that onboard step sequencer. Percussive patterns can be quickly created and synchronised to — or recorded directly into — a DAW. As a semi-modular mainstay, Leipzig v3 can capably create leads, effects, modular-style sounds, and more, making it an ideal investment for anyone budgeting for only one analogue synthesiser since it covers so many basses… and bass sounds!
Leipzig v3 is available to purchase — priced at £1,018.80 GBP (including VAT) — directly from Analogue Solutions via the dedicated Leipzig v3 webpage (https://www.analoguesolutions.com/leipzigv3), which also includes more in-depth information.
Please note that Analogue Solutions cannot ship to Austria, Belgium, France, Germany, Holland, Luxembourg, Switzerland, or the United States since those countries are serviced by dedicated distributors, but outside of those countries it is possible to order directly from Analogue Solutions’ growing global network of authorised dealers (https://www.analoguesolutions.com/dealers) with whom Leipzig v3 will be available at a European SSP (Suggested Selling Price) of €1,179.00 EUR (including VAT) and an a MAP (Minimum Advertised Price) of $1,199.00 USD.
See and hear Leipzig v3 being put through its impressive paces in Analogue Solutions’ sonically-diverse demonstration video here: https://youtu.be/ktsfxTF5jx8