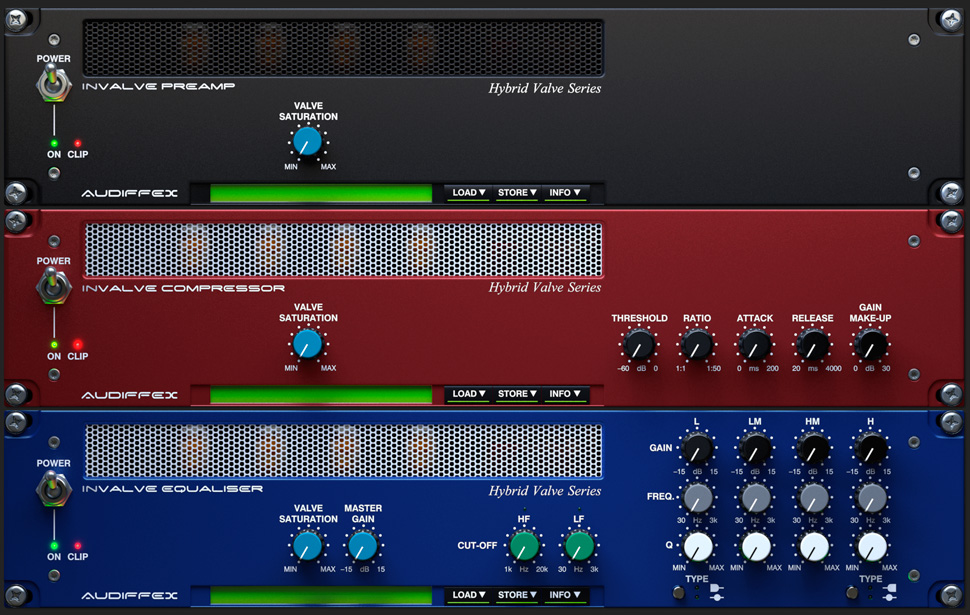 Now in its second generation, Audiffex inValve Effects has history, dating back to the company’s beginnings well over a decade ago as DSound, developing its VL2 Multichannel Valve Interface plug-in exclusively for TC Electronic’s proprietary Power|Core platform as a direct result of the phenomenal growth of affordable hard disk-based recording systems. As an accurate software simulation of UK audio product manufacturer TL Audio’s venerable VL-1 valve interface, an eight-channel rack-mountable ‘rose-tinted’ affair designed for use with (and to bring sought-after analogue warmth to) the commonplace eight-track digital recorders of the time, it proved popular by balancing pristine digital audio quality with the richness of valves neatly wrapped in the plain-sailing functionality of a plug-in. Put simply, the VL2 Multichannel Valve Interface was conceived as a means of easily adding the clarity and warmth of valve circuitry during mixing or mastering within any Power|Core-accelerated VST or RTAS plug-in environment at up to 24-bit/96kHz resolution. Later the product line was extended, renamed to inValve, while DSound itself became Audiffex, later Audified. As it still utilised Power|Core-provided DSP acceleration, accurate modelling of analogue circuitry and valve characteristics couldn’t be better (or simpler) than when using inValve — providing Power|Core remained an actively viable platform, of course. Cue TC Electronic’s disappointing decision to discontinue developing it — including hardware units as well as software — as part of a larger strategic review back in 2011. In an instant inValve was to be no more… or was it? With many musicians and engineers still interested in accessing the warmer sound of inValve, Audiffex released the inValve Effects software suite in 2012, comprising three native plug-ins emulating hybrid valve devices and available in AU and VST versions with 64-bit support. inValve Preamp was almost the same as the original VL2 Multichannel Valve Interface plug-in while inValve Effects also added the self-explanatory inValve Compressor and inValve Equaliser into the welcome mix. Moreover, the complete bundle was affordably priced at $49.00 USD, unmissable really when bearing in mind that the original inValve bundle was priced at $250.00 USD (and the original VL2 Multichannel Valve Interface plug-in weighed in at $119.00 USD). Times change and with it technology. Today, after another rebranding exercise, Audified’s second-generation Audiffex inValve Effects software suite serves up those same affordable and still-popular plug-ins, each running in 64-bit on native platforms (AAX/AU/VST2/VST3) with full support of Mac OS X 10.11 and Windows 10. Since standard and multichannel versions have helpfully been merged into one universal version, each plug-in can handle up to eight channels without the need to use a specialised multichannel version. All still add warmth and smoothness to analogue-like mixes, but bring welcome AAX support to the Avid Pro Tools community (fully supporting bypass functionality) while dropping the RTAS plug-in format. DSP performance is improved in keeping with the passage of time. After all, time and tide wait for no man… or software developer! Speaking of developments, discerning users surely cannot fail to be impressed by the high-quality GUI makeover given to all three plug-ins. Indeed, second-generation Audiffex inValve Effects users will find things far easier on the eye while their ears will be as satisfied as they ever were. With an added ability to double-click in the onscreen display of each plug-in and enter exact numerical values for parameters — and also use the key modifiers to fine-tune adjustments — makes mixing more satisfying than ever before! Why wait when you can afford to make your mixes more involved with Audiffex inValve Effects? Audiffex inValve Effects for Mac and PC is available to purchase for $49.00 USD from Audified’s online shop here: http://shop.audified.com/products/invalve-plugins Audiffex inValve Effects for Mac and PC is available to directly download online here: http://services.audified.com/download/inValve

inValve Preamp can be seen and heard in this informative introductory video here: https://www.youtube.com/watch?v=iJ-tkwgMNqg&feature=youtu.be

inValve Compressor can be seen and heard in this informative introductory video here: https://www.youtube.com/watch?v=winsibqq4oo&feature=youtu.be

inValve Equaliser can be seen and heard in this informative introductory video here: https://www.youtube.com/watch?v=TuOhyR_sXi4&feature=youtu.be