Martin
LAKE HIAWATHA, NJ, USA: Empirical Labs Inc. (ELI) is proud to announce availability of AROUSOR™ Rev 3 — the ultimate evolution of its flagship compressor plug-in, introducing more tones based on its Distressor hardware counterpart, itself one of the best-selling high-end compressors of all time as the product that started it all for the professional audio signal processing equipment designer and manufacturer/plug-ins producer, with the addition of two Opto (A and B) compression modes, as well as two additional (6:5:1 and 7:1) ratios for even more dynamic possibilities, available for free to existing owners of AROUSOR™ as the update they have been waiting for — as of March 30… 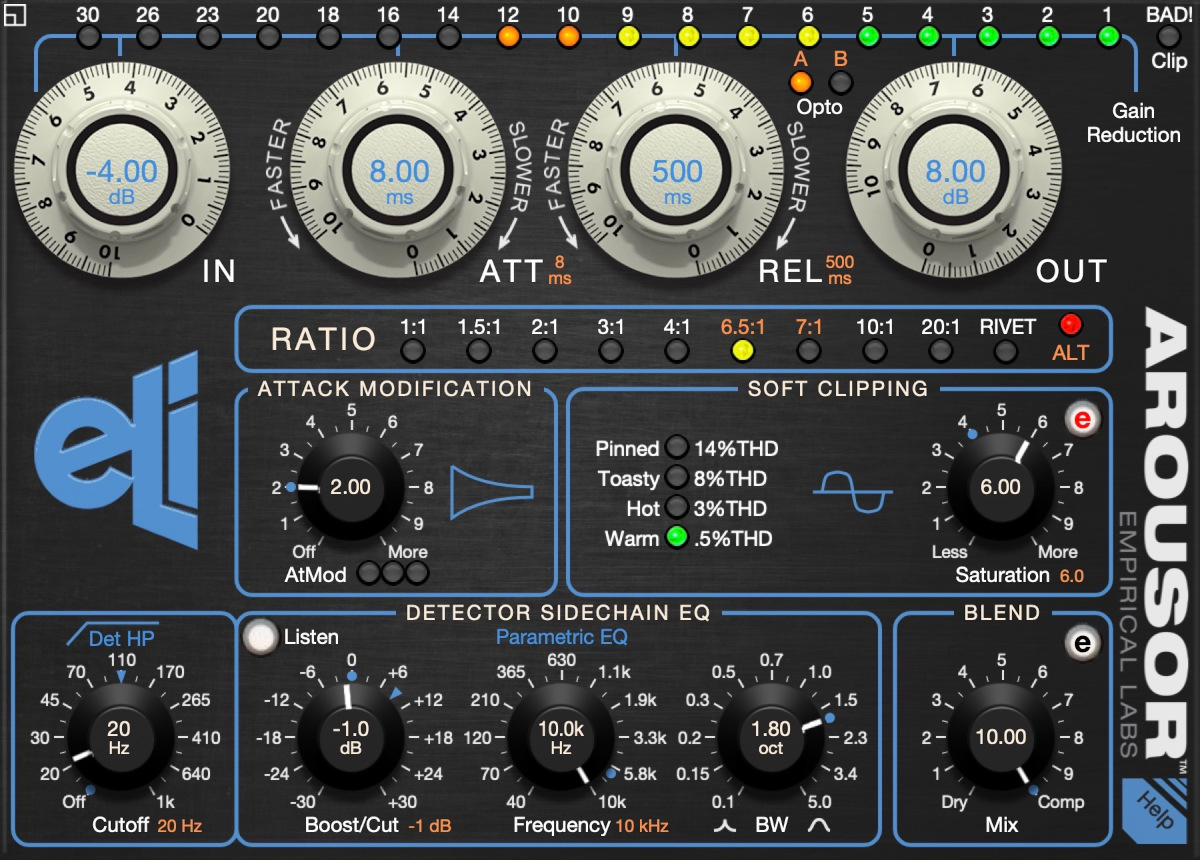 Being borne out of ELI founder Dave Derr’s love of classic compressors like the 1176, LA-2A, and Gain Brain (amongst others), the Distressor incorporates his favourite sonic characteristics of outstanding outboard originally released way back when with other unique and interesting features that have made it a staple for audio engineers all over the world as one of the best-selling high-end compressors of all-time. It is inevitable that such a popular product would one day receive the plug-in treatment, taking the soul of the company’s professional audio signal processing equipment hardware and applying it to the wonderful world of ITB (in the box) workflow within a DAW (Digital Audio Workstation), albeit AROUSOR™ is the only native Distressor plug-in produced by ELI itself. As a new and improved (EL8-X) version of the Distressor increased its tonality with the addition of new features, so AROUSOR™ Rev 3 — the ultimate evolution of ELI’s flagship compressor plug-in — introduces more tones based on its Distressor hardware counterpart.
Kicking off with two Opto (A and B) compression modes based on the time constants of a classic and a modern LA-2A compressor that many existing owners of AROUSOR™ have been waiting for — it is, after all, a much-loved Distressor feature, noteworthy new additions to AROUSOR™ Rev 3 also include a SOFT CLIPPING expert (e) panel — allows for introducing more second harmonic distortion and an ability to place the compressor input before or after the soft clipping circuit; a Listen mode — to hear what frequencies are affecting the DETECTOR SIDECHAIN EQ’s compression detector; additional 6:5:1 and 7:1 ratios (accessible by enabling ALT mode in the RATIO section) — for even more dynamic possibilities; and an enlargeable GUI (Graphical User Interface) — to double its original size for more comfortable onscreen editing.
ELI’s classic knee compression with proprietary high-resolution detector modelling remains at the heart of everything AROUSOR™ Rev 3 does so well, with 12 unique compression ratios, including the famous brick wall — RIVET mode in AROUSOR™-speak — for maximum gain reduction. Remaining features well worth highlighting here are an adjustable broadband SOFT CLIPPING control — for introducing warm saturation; a unique AtMod ATTACK MODIFICATION control — to change the shape of the initial attack; an advanced high-pass/band-pass DETECTOR SIDECHAIN EQ — for fine-tuning compression detector response; and Mix knob with (e panel-enabled) Dry Level Trim — for parallel compression.
As the update existing owners have been waiting for, AROUSOR™ Rev 3 has brought the legendary tone of ELI’s analogue hardware into the digital realm with even more possibilities as an ITB game-changer… just ask Jacquire King, whose work with the likes of James Bay, Kings of Leon, and Shania Twain has received 30-plus GRAMMY® Award nominations to date!
AROUSOR™ Rev 3 is available for purchase as an AAX-, AU-, VST2-, and VST3-supporting 64-bit effect plug-in for macOS (10.7 or higher) and AAX-, VST2-, and VST3-supporting 64-bit effect plug-in for Windows (7 or higher) for a time-limited introductory promo price of $129.00 USD for the first 10 days — rising thereafter to an MSRP (Manufacturer’s Suggested Retail Price) of $199.00 USD — directly from ELI here: https://www.empiricallabs.com/product/arousor/

A fully-functional, 15-day trial of AROUSOR™ Rev 3 is available to download from here: http://www.empiricallabs.com/downloads/