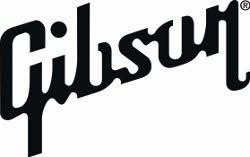 The Midtown series, introduced in 2011, has been a huge hit with players seeking an innovative mix of classic style with contemporary power and playability. Now Gibson USA delves deeper into its roots to bring you the Midtown Kalamazoo (for “Kalamazoo Michigan”), an exciting marriage of tradition and innovation. Whereas the Midtown guitars released until now have celebrated the acclaimed ES-335, the Midtown Kalamazoo takes its cue from another legendary archtop electric that featured an equally innovative “hybrid” design in its time: the Byrdland. In full Midtown tradition, although the style and feel all start with that vintage original, Gibson USA raises the bar to bring you an instrument that’s ideal for the needs and musical styles of the 21st century guitarist. The original Byrdland guitar—unveiled from Gibson’s Kalamazoo, Michigan, factory in 1955—was designed in consultation with two first-call Nashville session players, Billy Byrd and Hank Garland, and it incorporated several “advancements” that the two saw as beneficial to the player of the day. Its fast, slim neck profile and shorter 23 ½” scale length were intended to boost soloing speed and ease complex jazz chording, while its thinline hollow body helped to minimize feedback yet retained traditional archtop tone.

The Midtown Kalamazoo offers all these classic Byrdland-inspired features, and tops them off with the elegant looks of the real deal from the mid ’50s. Byrdland-style acrylic pearloid block fingerboard inlays, a multi-bound headstock with “flower pot” inlay, multi-ply body binding, gold hardware, and a high-gloss Vintage Sunburst finish in hand-sprayed nitrocellulose lacquer all help to make this an exceptionally classy guitar that represents the zenith of the Midtown line.

In terms of tone, Gibson USA continues Midtown tradition by loading the guitar with an augmented dose of power and versatility. A pair of ’57 Classic pickups present that hallowed PAF warmth and depth in standard mode, while four-conductor wiring allows split-coil sounds via push-pull switching on the tone knobs. Add it up, and the Midtown Kalamazoo is both an elegant celebration of the past achievements of Kalamazoo, and a superbly adaptable performer for today’s jazz, rock, blues, or country guitarist.

Much like the Byrdland guitar of 1955, the Midtown Kalamazoo has a thinline acoustic body made with a Grade-A maple top and a Grade-A mahogany back. Its Grade-A mahogany neck is carved to a fast profile that measures 0.818” at the 1st fret and 0.862” at the 12th, with a 23 ½” scale length for enhanced speed and comfort. It’s topped with a Grade-A rosewood fingerboard featuring acrylic pearloid block inlays, and crowned by a traditional multi-ply Byrdland headstock with “flower pot” inlay. The guitar looks exquisite in a high-gloss Vintage Sunburst finish in hand-sprayed nitrocellulose lacquer.

Two ’57 Classic humbuckers load the Midtown Kalamazoo with traditional PAF-style depth, richness, and clarity, while equipping it for the needs of today’s more demanding guitarist. The four-knob control complement with three-way Switchcraft™ selector switch retains a classic look, but push-pull switching hidden within each pickups’ individual tone control taps split-coil tones for a wide range of alternative voices, with a reverse-polarity bridge pickup for superior hum rejection in the middle “single coil” position. 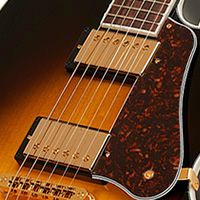 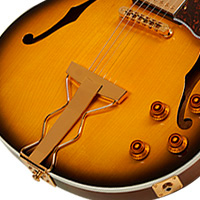 The Midtown Kalamazoo comes protected in a black hardshell case and includes a truss-rod wrench and Gibson USA owner’s manual, and is covered by Gibson’s industry-leading Limited Lifetime Warranty and 24/7/365 Customer Service.