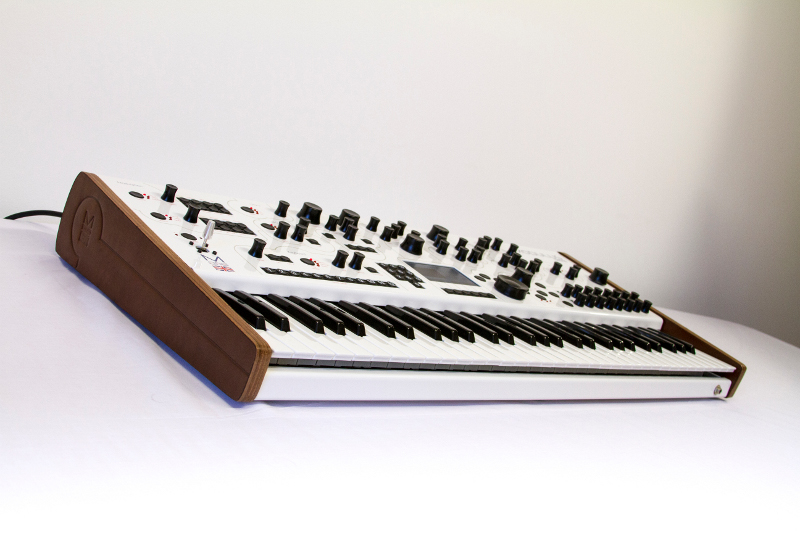 BRISTOL, UK: breakthrough British electronic musical instruments manufacturer Modulus is proud to announce availability of modulus.002 — the first analogue/digital hybrid polysynth to have been designed, developed, and manufactured in the UK for four decades — as of July 10…
Even though the technology for mass-market synthesisers was patently pioneered in the UK in the leafy London suburb of Putney at the tail end of the Swinging Sixties, the last time that a polyphonic/multitimbral analogue synthesiser was designed, developed, and manufactured in the UK — actually within Wales — was way back in the late Eighties. It is with utmost pride, therefore, that Bristol-based Modulus has not only succeeded in bringing back that pioneering spirit to Blighty with the mighty modulus.002 but has admirably succeeded in doing so by creating an amazing modern-day musical instrument that truly represents one giant leap for ‘synthkind’ with a sizeable number of notable new features to its innovative name. No easy task in climatically cynical conditions during an era of increasingly shortened attention spans, synth-wise or otherwise. Been there, done that, bought the (Moog) T-shirt, some might cynically say!

Yet surely soothsaying is a better bet in this case? Why? Well, modulus.002 even sports some world firsts! So what makes modulus.002 tick, then, and what, exactly, is it that makes it so special in comparison to today’s commercial and ‘boutique’ offerings from other manufacturers, both bigger and smaller? Let’s look at some straightforward facts for starters…

As an analogue/digital hybrid keyboard synthesiser (using an aftertouch-enabled premium Fatar semi-weighted, five-octave key mechanism), modulus.002 provides 12 discrete voices of polyphony with full multitimbrality if so desired. As such, it features two NCOs (Numerically-Controlled Oscillators) per voice for exceedingly high resolution and stability with wide-reaching waveform selections, together with two sub-oscillators, individually (and uniquely) switchable from a traditional square wave to having the same waveform as the main NCO to effectively produce four oscillators per voice; a Modulus-designed 24dB/octave four- pole transistor ladder filter featuring some very unusual morphing or ‘polesweeping’ effects, enabling ear-opening transitions from 24dB/octave four-pole to 6dB/ octave one-pole filtering and anywhere in between; one LFO per voice as well as a global LFO; wide-ranging modulation options, all accessible directly via the front panel — no navigating convoluted and confusing menus; a pure analogue signal path from the oscillators right the way through to the combined XLR/TRS balanced/unbalanced outputs (with all 12 voices individually available for external processing via a dedicated D-Sub connector); two audio inputs enabling internal audio processing from the VCF onwards… and that’s only scratching the surface. Not literally, of course!

While all voice control parameters are accessible via a well-thought-through front panel that is both attractive and intuitive in use thanks to sticking to traditional synthesiser workflow, what lies beneath is really remarkable. Radically departing from the norm, modulus.002 is blessed with an unrivalled user interface based around a high-quality 4.3-inch screen with wide viewing angle. It is context sensitive, whereby the control parameter of any control knob touched by the user is immediately displayed onscreen. Synthesiser savants and audio aficionados will surely unite in their appreciation of the sonic depths that this well-specified speedy dream machine can deeply dive into!

Forget about an analogue renaissance here, however; let’s talk truly revolutionary design features for a moment. modulus.002 represents a unique approach to synthesiser design, taking traditional analogue circuitry combined with modern, reliable digital developments and marrying it all to a completely new control platform. Phenomenally, modulus.002 brings cloud functionality to a synthesiser for the first time! The Ethernet port means modulus.002 can be connected to a network to enable updates via the Internet — no more MIDI SysEx dumps to get you down in the dumps — and access to the modulus.cloud means user profile settings, sound patches, sequences, and other content can be easily replicated to a cloud-based server platform to enable rapid resynchronisation to another modulus.002, regardless of whether it is owned by the same user or a collaborator at a remote location. Let’s be honest here. We’re well into the 21st Century now, so why not provide modulus.002 users with data management features that are expected as the ‘norm’ in modern consumer technology devices, yet have hitherto eluded the electronic musician? Makes sound sense to the Modulus team, that’s for sure! And we’re sure it will make sound sense to modulus.002 users, too.
So what other notable modulus.002 features are worth making a song and dance about? An inbuilt MIDI-sync-able 16-track, 12-row, 32-step sequencer with 16 front panel-positioned step-time editing controls can give any hardware rivals already out there a serious run for their money. For sequences can not only be transposed dynamically while running but sophisticated so-called ‘mini arpeggiator sequences’ created using the arpeggiator’s Hold mode can be speedily saved as sequences for latter recall and editing using the sequencer. Moreover, modulus.002’s Animator allows any control to be sequenced, enabling complex filter transitions, waveform changes, and modulation matrix changes to be sequenced. Lest we forget, 12 ‘quick recall banks’ are accessible directly from dedicated front panel buttons. Build up set lists of presets, sequences, and animations, making modulus.002 a live performance partner par excellence.
Plain and simple? Far from it, it seems! So who better qualified, then, to explain the whys and wherefores of taking a truly thrilling synthesiser design from the drawing board to an equally enthralling production-ready product launch like this in under a year than company co-founder and principal designer Paul Maddox, a top-tier talent with proven production pedigree, best known within the synthesiser industry for his well-received MonoWave, a limited-run, 19-inch rack-mountable, MIDI- controllable monosynth inspired by Germany’s legendary PPG Wave series — arguably amongst the most coveted high-end synthesisers of the early Eighties — featuring two digital oscillators with 256 samples per waveshape and an analogue 24dB transistor ladder filter, as well as his more recently-released VacoLoco range of ‘pocket synth’ designs. Do tell. Why now? Why the big step up to the brave new world of modulus.002? Muses Maddox: “This came about because I’ve had a long-held dream to build a polysynth since I was knee high. I’ve nearly got there several times, but it was a golden opportunity in July last year when my business partner, Philip Taysom, and myself sat together and said, ‘Now is a good time to do it.’ Both Philip and myself are passionate about synthesisers, and we feel that the synthesiser market has been neglected for a long time in terms of high-end, pro — in quality and feel — instruments. I quite often equate this to a PRS guitar. There is nowhere in the synthesiser industry that I’m aware of where you can go and buy the equivalent of a PRS. That’s what we’re aiming at — top quality, top to bottom.”
So there you have it, folks. With top-quality components sourced and designed throughout its robust, road-ready construction coupled with upmarket design flourishes like leather-bound end cheeks — quite possibly another world first, modulus.002 is a fighting force to be musically reckoned with. British synth power is alive and kicking, and Modulus has just fired its impressive opening synth salvo that more than lives up to its Machines for Musicians tagline. It’s aim is true, so watch this space…
Der Preis beträgt 3,795.00 Euro plus MwSt.
Weitere Informationen gibt es hier: Link