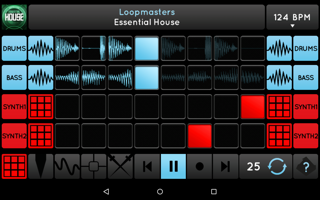 Following its initial iOS launch, the critically-acclaimed app has been downloaded from Apple’s App Store by over 300,000 users worldwide, prompting its innovative creators to turn their attention to bringing Ninja Jamm to Android. Although boasting the largest installed user base of all operating systems as of 2015, it is often overlooked by audio developers… until now!  Like its iOS arch rival, Android uses touch inputs that correspond to real-world actions, such as swiping, tapping, and tilting to manipulate onscreen objects. Touching to mix and mash music clips in the clip matrix, triggering and scratching one-shot samples, tilting and shaking to apply radical effects, and recording, Ninja Jamm allows instant sharing on social media. Creatively combining aspects of DJ-ing, remixing, and production, it is an open invitation for anyone to dive in and start creating their own electronic music — something long held close to Coldcut’s collective heart.  How does Ninja Jamm tick, technically, then? The road to ‘Ninja jamming’ on Android was a long and winding one: following Coldcut co-founder Matt Black’s Ableton Live/Novation Launchpad-based prototype, sound designer/software programmer/musician (and former Abbey Road audio engineer) Christian Curtis created a concept proof in MaxMSP, a visual programming language that helps users create complex, interactive programs. Coder Ed Kelly then took up the programming baton using Pure Data (PD), a visual programming language developed for creating interactive computer music and multimedia works.  Who better, then, to provide the edited highlights than Matt Black himself: “The original choice of Pure Data/LibPD was inspired by Peter Kirn’s Create Digital Music article on how to use LibPD — which turns PD into an embeddable library, so it can be used as a cross-platform sound engine in mobile phone apps. Peter Brinkman was the main software engineer and inspiration behind LibPD. We used ofxPD, an add on for OpenFrameworks, a cross-platform open-source toolkit for creative coding, to create the GUI for Ninja Jamm — Dan Wilcox did a lot of work to create ofxPD and we worked with London-based tech/art collective seeper to design and program the look of the iOS app. As part of the Android conversion, Ant1 Rosseau subsequently developed a layer on top of OF called POF Pure Data OpenFrameworks, which we have spun out as an open-source git project to make it easier for others to create funky cross-platform interfaces for PD using the power of OpenFrameworks.” Ninja Jamm is possibly the most complex PD patch yet implemented in any mobile app!  iOS success notwithstanding, why wait for Android? “Android latency is an issue,” maintains Matt Black: “Most Ninja Jamm functions are not impacted too much by latency, but for the ‘stabs’ page one needs to develop an advanced ‘Ninja’ technique to anticipate the latency! All Android apps tested so far have this issue; only a few devices — mostly manufactured by Samsung — have decent low-latency hardware. It’s a huge issue, much discussed by a community of Android music-heads. This is one area where iOS is well ahead, and parallels the long-time superiority of Mac over PCs for the financially small but very influential business of music production. There’s not a lot that we can do about latency, but Ninja Jamm on Android is still a lot of fun regardless so we thought we’d dive in and give it to the Massive now, rather than wait for several years until the big boys resolve the issue.”  In the meantime, what Android users have here is a potently powerful, extremely easy-to-use music-making app like no other. In some respects the Ninja Jamm experience on Android actually improves upon its iOS forerunner. For example, the Android-only optional MultiScreenLayout functions allow access to all screens simultaneously.  Coldcut have their own module in the app, the Coldcutter, dating back to their claim to having first invented an algorithm now known as the ‘buffer shuffle’ whereby loops are virtually chopped into equally-sized slices so they can then be reordered, repeated, reversed, and omitted. This is a potent tool for exploring infinite beat variations. The latest Coldcutter lets the user shuffle, then holds the variation until told to reshuffle, resulting in each new sequence being recognised as a groove. Matt Black: „Humans love grooves, patterns, and rhythms… in both art and music I’d define this as a balance between repetition and variation.”  Get your groove on today, then, with Ninja Jamm on Android — all the more so with the simultaneous release of several Samplepacks from Brighton-based self-styled sample boutique Loopmasters, enabling users to quickly create studio-quality tracks from a wide selection of genre-specific content, including the House and Trap titles that come free with the app. Android-based musical creativity is quite literally on tap with Ninja Jamm!

Ninja Tune’s Ninja Jamm requires Android 2.3.3 or higher and can be directly downloaded for free with four packs of creative content from Coldcut, Loopmasters, and renowned rapper Roots Manuva from Google Play here: https://play.google.com/store/apps/details?id=net.ninjatune.ninjaJamm&ah=Z9NiGLsYeQb7DA_ScMFBZVGeyGc (Note Ninja Jamm users can opt for Share+ extra as an in-app purchase to access all of the Share options and Android-only MultiScreenLayout to open up even more fun functionality for less than half the price of a decent cup of coffee!)  Several genre-specific Samplepacks from Loopmasters and remix Tunepacks from notable Ninja Tune recording artists can also be purchased as in-app products, priced between £0.69 and £4.49 apiece.