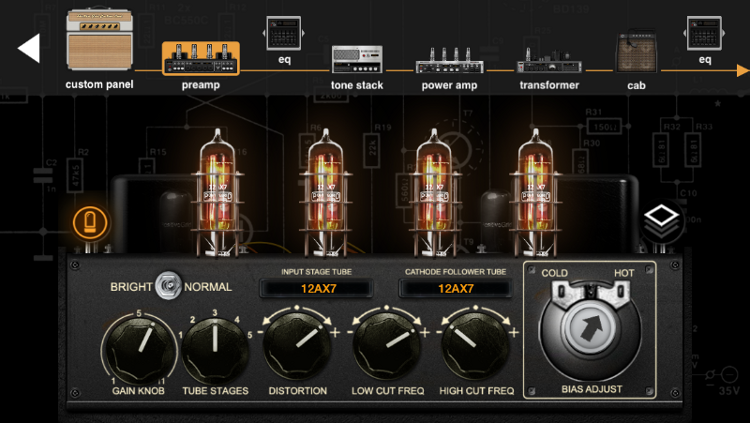 BIAS
BIAS is an amp designer, modeler and processor that includes 36 of the most sought-after vintage and modern amps in rock ‘n’ roll history as a starting point for user customization. Users can modify these amps and virtually build their custom amps by swapping out the tubes, preamp, transformer, tone stacks, cab and mic to create their own distinctive signature sound. Users can also upload their amp creations to ToneCloud, BIAS’ own amp-sharing platform, to share their custom presets with other users.

Amp Matching
Amp Matching allows musicians to instantly replicate any real amp tone in the world, right in their Mac or PC. Simply input signal from a miked amp or pre-recorded guitar track, and BIAS Desktop will invisibly insert additional processing into the signal path to make your current amp precisely match the tone of the inputted guitar signal. No other plug-in can do this. Once the tone is captured and replicated, the user can save it as a custom preset and share it with other musicians on Positive Grid’s proprietary social network, ToneCloud.

ToneCloud
ToneCloud is a proprietary social-networking platform that allows musicians to create, share and download over 10,000 custom BIAS amps, including those created and uploaded by signature recording artists. With BIAS Desktop, guitarists can share every possible amp tone, including those created using the new BIAS Expansion Packs and Matched Amps.

BIAS Desktop is planned for a Q3 launch. Positive Grid currently invites experienced and talented individuals to join them in shaping this project and give early feedback prior to the product’s release.
To sign up, please visit http://www.positivegrid.com/bias-desktop/

About Positive Grid: Based in California, with satellite operations in Germany, Italy and Taiwan, Positive Grid focuses on delivering superior and highly creative mobile music experiences. Since 2008, the company has designed and developed a core technology base and is currently expanding it to various applications. Positive Grid’s best-known product range, featuring the JamUp multi-effects guitar app and interface, is now distributed in over 60 countries around the world.