LONDON, UK: Spitfire Audio, purveyors of the finest virtual instruments from the finest musical samples in the world, is proud to announce availability of PP021 EVO GRID 3 — taking its EVO GRID concept into hitherto uncharted musical waters with a series of tempo-lockable evolving strings ‘motions’ making this latest addition to the Producer Portfolio range of sample-based virtual instruments for Native Instruments’ industry-standard KONTAKT platform a must-have tool to revolutionise writing and realising string compositions — as of May 5… 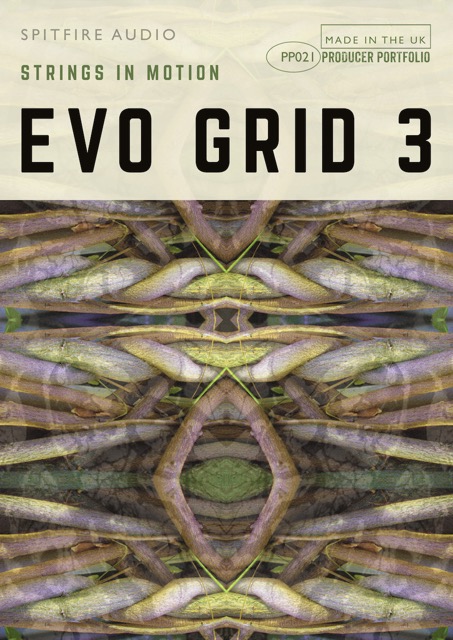 As implied by its STRINGS IN MOTION subtitling, PP021 EVO GRID 3 represents the largest leap forward so far for the EVO GRID concept by sampling evolving ‘motions’ or movements and rhythms outstandingly orchestrated by London- and Paris-based British composer and orchestrator Ben Foskett for a ‘chamber’ (small-sized) string band beautifully recorded in the dry, yet warm-sounding environs of Air-Edel Studio 1, one of the most versatile spaces in London, frequently used for recording rock bands, jazz groups, grand piano, chamber orchestras, and — appropriately — string sections.
Stepping briefly back through time, though… what, exactly, is that EVO GRID concept? Christian Henson — award-winning composer and co-founder of Spitfire Audio — holds the key to the genesis of this simple concept, which was inadvertently initiated as a spellbinding solution to a conundrum.
Commissioned to write 13 hours of music for a sprawling, epic TV series, but with no budget for orchestra and only three months in which to do it, a quick string sampling session subsequently ensued, during which he fortuitously recorded a series of greatly differing long strings evolutions. Staggered by the resulting ‘for his ears only’ sample-based virtual instrument, where the chaotic nature of different evolutions placed over different intervals made for exciting and unexpected results, he semi-seriously stated, “I could literally hit a big C minor chord, hold my sustain pedal down, reach for my sandwich, and the thing would still be writing itself a minute later while I was wiping mayo off my beard!”
But before long… well, within two years of quickly creating that ear-opening experimental sample-based virtual instrument for Christian Henson’s private collection, Spitfire Audio agreed to effectively offer it up for free (in return for a £2.00 GBP donation to charity) as SCARY STRINGS, the cornerstone of its Spitfire Laboratories (http://www.spitfireaudio.com/shop/ranges/spitfire-labs/) selection of essential staples, inspiring must-haves, miscellaneous oddities, and curios, with the company covering all admin and credit card costs so that every single penny goes to a worthy cause — an impressive £111,260.92 GBP having been raised (at time of writing) for the likes of UNICEF, the United Nations’ children’s charity!
With that, the exciting EVO GRID concept quickly took shape and hold… hyper-long, sample-based articulations that evolve — sometimes subtly, sometimes severely — over time before returning to their original state. Subtly paying homage to the breakthrough British EMS VCS3 — making musical history upon its introduction in 1969 by being the first commercially portable synthesiser available anywhere in the world, thanks to its innovative modular matrix-based patchboard dispensing with the telephone exchange-like cabling of other (much larger) modular systems in favour of making space-saving connections with (removable) coloured pins, Spitfire Audio then organised its so-called ‘Evos’ (evolutions) on a GUI-based grid — hence the EVO GRID designation, designed so users can cunningly plot which key range they sit on.
Today, then, thanks to that enterprising EVO GRID concept, composers can easily engage the listener by doing very little! Directors often say, “Sort a scene out!” But do it by barely changing a note is what they really want. With a little help from Spitfire Audio, anything’s possible, proven, firstly, by the strings-preoccupied PP017 EVO GRID 1 and PP020 EVO GRID 2 releases — respectively subtitled EVOLVING STRINGSCAPES and SECOND EVOLVING STRINGS, ingeniously introducing a way of arranging evolutions across chosen ranges with a die randomisation function delivering a near-infinite number of possible combinations!
Come May 5, PP021 EVO GRID 3 sees Spifire Audio taking the EVO GRID concept further forward by bringing tempo-lockable ‘motions’ to the strings-centric compositional table. From shimmering textures and essential motoring ‘Evos’ that help to keep simple compositions ticking along to the most complex of polyrhythmic systems, one thing’s for sure… users will surely have to limit their time spent working with PP021 EVO GRID 3 — once you start, you just can’t stop! So claims Christian Henson at any rate.
Though the thinking behind PP021 EVO GRID 3 was initially to tackle the taxing sampling question of re-bowing — repeated phrasing on the same note, after two years of drawn-out development and shrewd scripting, the end result is so much more than was originally hoped for. This time tempo-lockable re-bowing patterns flow forth freely via the EVO GRID, gifting great ideas to media composers having to produce yards of sophisticated underscore for television commissions, games composers looking for ways of generating hours of iterative material, or producers seeking cool and understated orchestral textures — in other words, anyone looking for inspiration.
In PP021 EVO GRID 3 there are 37 unique evolutions across the whole range of the string band, grouped into three different categories. Its inspirational sounds are all tempo-locked to the host DAW while four individual mic signals — Close, Sweet Loops, ‘Completely Varped’, and Stretched — and a completely customisable EVO GRID with randomise function make more adventurous strings soundscapes than ever even more musically addictive.
Ask Christian Henson… and mind the mayo!