EDMONTON, AB, CANADA: having fulfilled preorders, then turned heads and opened musical minds with a show-stopping showcase at The 2019 NAMM Show in Southern California, January 24-27, pro audio manufacturer Flock Audio is proud to announce availability of its innovative PATCH System — surely the world’s most advanced digitally-controlled, 100%-analog patch bay routing system, thanks to a killer combination of (PATCH APP) software and 64-point connection-providing (PATCH) hardware working together in perfect harmony, allowing anyone to easily control analog audio routings without having to resort to the use of manual patch cables — as of March 25… 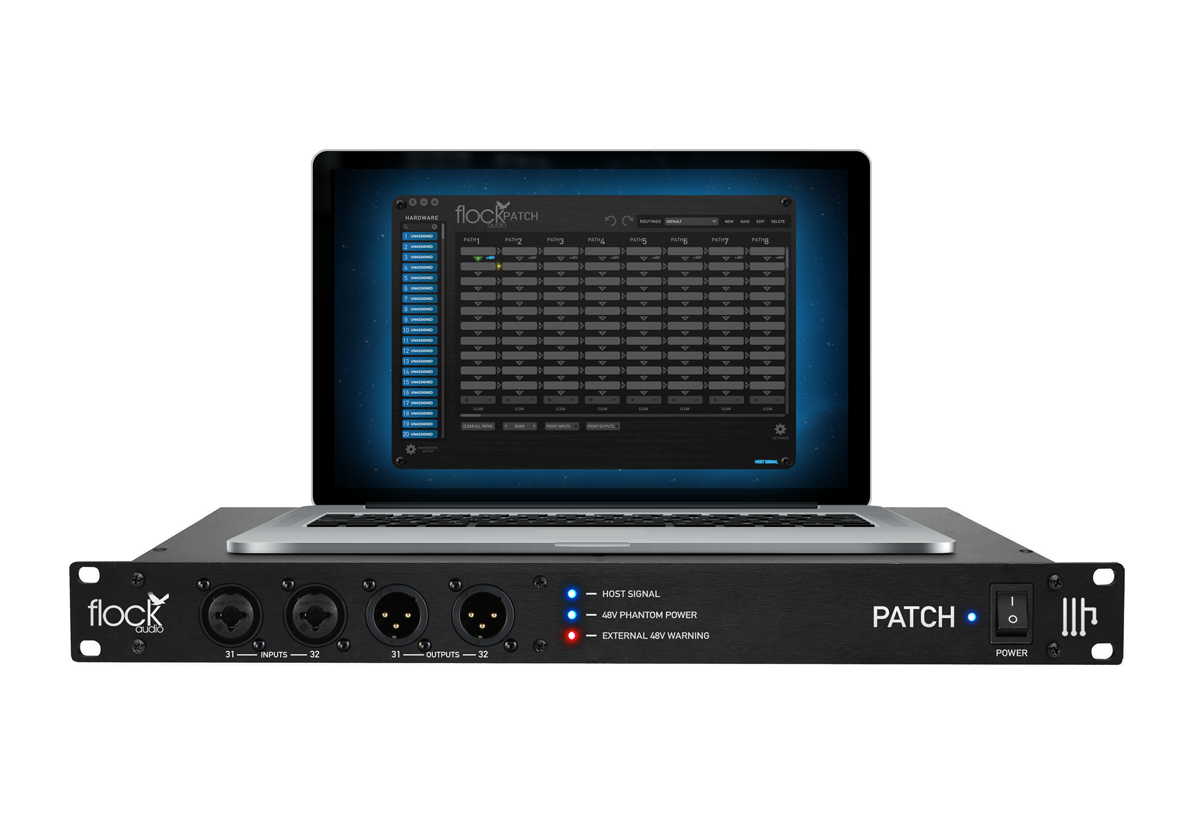 Who better to formally introduce the world’s most advanced digitally-controlled, 100%-analog patch bay routing system to the wider world than Flock Audio CEO/Director Darren Nakonechny? He helpfully begins by picking up the backstory, before fast-forwarding through to the resultant revolutionary PATCH System solution: “I started working on a conceptual design known as PATCH in early 2016 when I decided to leave my stable career and chose to pursue the path less travelled of designing and developing a better and more efficient process for professional audio recording engineers from the depths of my basement home recording studio. In need of a better solution other than the available 1870s technology known as a traditional patch bay, the concept was born to create a fully-digitally-controlled — but 100%-analog — circuit routing system that wouldn’t color or alter the audio signals passing through it. After two years of strenuous work and constant focus, Flock Audio, the company I started, created the world’s first and most advanced digitally-controlled analog audio routing system with features never before possible in conventional analog audio routing.”

Revolutionary as it is, the PATCH System design duly makes sense. Simple and sleek as the beautifully-built PATCH hardware may first appear — and well worthy of the PROUDLY DESIGNED & MANUFACTURED IN CANADA wording boldly blazoned across its single rack space-occupying rear panel, packing in a whole lot of user-friendly functionality clearly comes naturally to all at Flock Audio.

Advantageously, the PATCH hardware features four connectors — two INPUTS (on Neutrik XLR/TRS Combo jacks) and two OUTPUTS (on Neutrik XLR male jacks) — perfectly positioned on its front panel, meaning users can conveniently and easily integrate any analog audio equipment or instruments into their recording setup that they might need to audition. As such, they can quickly redirect INPUTS 31-32 and/or OUTPUTS 31-32 from the rear side of the PATCH hardware by clicking the FRONT INPUTS or FRONT OUTPUTS toggle buttons located in the lower section of the equally easy to use, easy on the eye PATCH APP software GUI (Graphical User Interface), instantly receiving notification that those rear side outputs are no longer actively functioning. Front panel-redirected INPUTS 31-32 are able to have 48V phantom power supplied to their connectors using the PATCH APP software, which will be visually confirmed by the front panel-positioned 48V PHANTOM POWER LED (Light Emitting Diode) illuminating as a slow-fading blue indicator to notify the user to not plug or unplug any audio equipment until the 48V phantom power is disabled. Three further coloured LEDs complete the simple- and sleek-looking PATCH hardware’s front panel, also assisting the user with welcomed visual notifications — namely, HOST SIGNAL (illuminates solid blue when the PATCH hardware is connected to — and communicating with — the associated CPU); EXTERNAL 48V WARNING (illuminates as a flashing red indicator when any connected preamp has its 48V phantom power activated as it’s not necessary to activate 48V phantom power on any connected preamp since the PATCH System supplies its own onboard 48V phantom power); plus POWER rocker switch (with an associated blue LED indicator).

Returning rear side, all remains relatively straightforward, starting with a 6-pin POWER SUPPLY connection for the included 24VDC power supply (with threaded locking sleeve). Next to that sits the USB connector; clearly, the PATCH System uses very little CPU (Central Processing Unit) power to send and receive commands from the hardware, so works off USB 2.0 and onwards compatibility — chosen for its inherent low CPU usage. Ultimately, users benefit from the PATCH System’s hardware processing working harder for their audio interface and DAW (Digital Audio Workstation), as opposed to devoting a large amount of that processing to routing analog audio equipment. Each PATCH System, of course, comes complete with a USB-A to USB-B cable. Connectivity is what it’s all about, after all, and the PATCH hardware doesn’t disappoint in that regard, readily equipped to become the hub of any studio setup with 64-point connection via eight DB-25 connectors — INPUTS (1-8), INPUTS (9-16), INPUTS (17-24), INPUTS (25-32), OUTPUTS (1-8), OUTPUTS (9-16), OUTPUTS (17-24), OUTPUTS (25-32) — for those all-important analog routings.

Reality dictates, however, that it’s the killer combination of PATCH APP software and 64-point connection-providing PATCH hardware working together in perfect harmony that makes the PATCH System what it is — the world’s most advanced digitally-controlled, 100%-analog patch bay routing system, allowing anyone to easily control analog audio routings without having to resort to the use of manual patch cables. Cable replacement comes courtesy of the MacOS- and Windowscompatible PATCH APP software. Skilfully accomplished, finely tuned, and intuitively powerful, it brings the simplicity of drag and drop functionality to the world of analog audio routing. PATCH APP is really the driving force behind creating complex or basic analog audio routings in seconds!

Intentionally implementing a familiar look and feel, yet oozing originality, PATCH APP harnesses the PATCH System’s power and flexibility via four user-friendly sections, starting with an index of HARDWARE; here users can customise and store all their DB-25-connected outboard audio equipment and instruments in an easy-to-use, searchable index. The ROUTINGS menu allows them to quickly store active routings and recall them at a later date. Arranged as a grid, the active routings section is where users can set up and visualise their routings. There they can click and drag any analog hardware from the HARDWARE index into a PATH to create their desired signal flow combination; by being based on the visual concept of most DAW layouts, the active routings section should feel familiar to today’s DAW-driven production populace. Put simply, a PATH represents the PATCH System’s signal flow; all are arranged from top to bottom in the PATCH APP. Adding advanced Multing — turning one PATH into two or more for parallel processing — capability is simply a case of clicking the directional arrow so it illuminates in yellow to the right side of any active
PATH on the specific ‘digital rack piece’ that the user wishes to Mult from. And all without the impedance issues that come with traditional Multing, meaning that there is no chance of any split signal quality loss!

Last but by no means least, the PATCH System has 32 channels of 48V phantom power built right in so users can activate 48V phantom power to any of its input channels for powering condenser microphones the way they were intended to be powered. It’s possible to toggle the 48V MASTER — ON or OFF — and ALLOW or DENY the ability to connect 48V phantom power on any input connected to the PATCH System using the 48V SAFEGUARD feature via the PATCH APP; as such, it’s safe to say that it’s impossible to accidentally enable and/or damage any phantom-powered prized microphones — much to the relief of any serious studio owner, obviously!

And as if that wasn’t enough to be getting on with, why not route and identify multiple PATCH Systems for expanded I/O capabilities? Why not, indeed. It’s equally easy, after all. Almost anything is possible when working with the world’s most advanced digitally-controlled, 100%-analog patch bay routing system from Flock Audio!