LONDON, UK: Spitfire Audio, purveyors of the finest virtual instruments from the finest musical samples in the world, is proud to announce availability of JOEY SANTIAGO — showcasing the distinctive, distorted sounds of innovative Filipino-American guitarist and prolific composer Joey Santiago (famed for playing lead guitar with American alt-rockers The Pixies) with a welcome namesake addition to the company’s Signature range of sample-based virtual instruments by trailblazing talent for Native Instruments’ industry-standard KONTAKT platform — as of March 17… 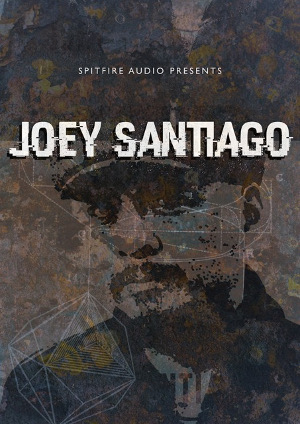 Who better to make the formal introductions then, than Joey Santiago himself? “Sample libraries are — to me — just a palette of sounds, but this one I was pretty serious about, because I wanted it to be useful,” he begins, before adding: “It’s not your usual instruments — well, it’s a guitar, but it imitates a celeste, and all that stuff. And you’ve got guitars, too. There’s some cool pads — you need pads and little plucks, and my guitar through the amps I use.”  Ultimately, of course, creating a library of beautifully distorted filth from the hallowed hands of Joey Santiago for users of the resultant JOEY SANTIAGO Signature series sample-based virtual instrument to then gorge on in their own productions — not just playing his guitar and effects pedal collection via his own amps, but rather ‘playing’ Joey Santiago himself playing his guitar and effects pedals via his amps… in effect — was a true labour of love, one which spanned two continents and involved a truly talented team of individuals… including, of course, Joey Santiago himself!  How Spitfire Audio got to Joey Santiago and then to JOEY SANTIAGO is a story unto itself. Indeed, it was only a matter of time before the company moved on to trailblazing guitarists, having previously worked with drumming rock gods Chad Smith (Red Hot Chilli Peppers) and Roger Talyor (Queen) on THE GRANGE and Jason Bonham on HZ2 – HANS ZIMMER PERCUSSION LOS ANGELES, so it only seemed fitting to turn to one of the most inventive and influential guitarists of his generation, a composer in his own right who knows only too well what goes into creating virtual musical magic… meet The Pixies’ Joey Santiago. Angular and bent best describes his unique guitar technique. And “…angular and bent…” is exactly how the man himself once described it!  So Spitfire Audio met Joey Santiago, decamping together to a vibey small studio space in East LA. There six amps and the guitarist extraordinaire’s extraordinary pedalboard were dutifully rigged up via a selection of the finest valve and ribbon mics available, arriving at a rare vintage Neve console. Capturing the thrilling results followed a brief that was not necessarily to define a ‘virtual guitar’ but rather to create an environment where Joey Santiago’s abundant arsenal of sounds could freely flow forth, following in the supreme Signature series footsteps of LEO ABRAHAMS – ENIGMA and ENIGMA 2 – THE RAPTURE before it in making a library that exudes cool. Creating a library that takes risks that not many other sample libraries would dare to, in other words.  Working to the template of those super-successful ENIGMA collaborations between artist, guitarist, and producer Leo Abrahams and Spitfire Audio, JOEY SANTIAGO is, in fact, not a virtual instrument per se, though it does feature some multi-sampled guitars. Instead it is best described as a collection of playable sounds from one of the most innovative guitarists around… and one of the coolest dudes the company has had the pleasure of working with to boot!  But the JOEY SANTIAGO story does not simply stop there. Thanks to Spitfire Audio’s ‘due diligence’, what started as a variety of multi-sampled instruments recorded and performed by the man himself through his favoured guitars, fabled pedalboard, and much-toured amp rig ended up being re-amped back in London at super-cool Bermondsey-based studio The Pool, packed to the gills with vintage equipment and a live room designed to offer a range of acoustics. Afterwards, this raw material — including additionally captured hours of Joey Santiago shredding, twisting, and distorting those raw materials to create new sonic adventures — was taken up to Spitfire Audio co-founder and composer Christian Henson’s new ‘warp room’ on the edge of an extinct volcano in Scotland for further sound-bending treatments!  The result? Try choosing from six different signals with different mics and mixes — four amplified, including Joey Santiago’s own Marshall JCM800, Fender Vibrolux, and a Selmar, plus two room perspectives for starters. Then there are several categories of presets and articulations: INDIVIDUAL PLUCKS (sounds played by Joey Santiago himself through a selection of handpicked pedals); SANTIAGO SOUNDS (created by the man himself through his vast collection of effects pedals, played back through Spitfire Audio’s proprietary Mercury synth engine to add additional effects options); GIGANTIC MUTATIONS (loops crafted from various sections of Joey Santiago’s playing, housed and warped within Spitfire Audio’s eDNA engine); and RADIANT PADS (no fewer than 150 sounds curated into 125 presets with an eDNA engine-driven metallic edge).  Easy to use… JOEY SANTIAGO users can simply pick an amp and then marvel at eDNA and Mercury’s miraculous abilities when it comes to flexibly and easily editing the hard work that Spitfire Audio audibly put into its creation, making it more their own in no time at all. Before long they’ll be telling everyone that they’ve got Joey Santiago of The Pixies playing on their tracks! Truth be told, JOEY SANTIAGO’s appeal is far reaching, ranging from the rock and pop community to EDM experimentalists, as well as film, game, and TV composers wishing to utilise the ‘real deal’ in their work. What are you waiting for? Fashion yourself some seriously useful sounds with JOEY SANTIAGO and musically meet the man himself in the comfort of your own computer!

Until 23:55 GMT on April 1, 2016, JOEY SANTIAGO can be purchased and digitally downloaded from Spitfire Audio for an introductory promotional price of £149.00 GBP/$229.00 USD/€209.00 EUR from here: http://www.spitfireaudio.com/shop/ranges/signature-range/joey-santiago/ (Thereafter, its RRP rises to £199.00 GBP/$299.00 USD/€279.00 EUR.)  Note that Native Instruments’ KONTAKT 5 (full version) is required to run JOEY SANTIAGO, while Spitfire Audio’s free Download Manager application for Mac or PC allows anyone to buy now and download anytime.