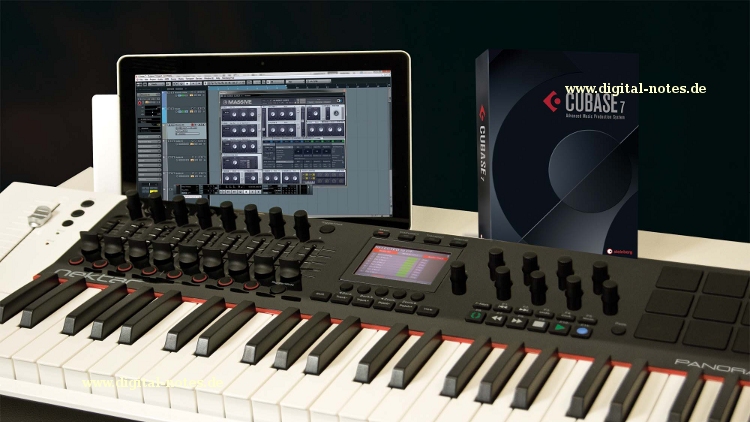 Panorama is designed with DAW navigation and workflow in mind, making it easy to control Cubase while performing or recording without having to reach for the computer mouse or the QWERTY keyboard. Each control, transport or navigation button is automatically mapped to Cubase with a logical layout that’s completely transparent thanks to Panorama’s high resolution TFT display.

When changing tracks using the Track -/+ buttons, the track name and the type of track is called out on the TFT display. The Panorama P4/P6 motorized fader automatically adjusts its position according to the volume of the current track selection.

Panorama mainly controls Cubase through 3 dedicated modes; Mixer Mode, Instrument Mode and Transport Mode. Each of which is engaged at the touch of a button. Mixer mode controls the Mix Console with up to 8 channels controllable at the same time. 8 faders are assigned to volume, 8 encoders assigned to either pan or the sends from 1 to 8 and the 8 LED buttons assigned to control channel mute, solo, record arm or select.

Panorama’s second group of 8 encoders control the selected track’s channel settings including EQ, Inserts (as well as plug-in selection and editing), FX sends and Quick controls.
Instrument Mode addresses the active VST Instrument when an instrument track is selected. Just like Reason Instrument Devices and Rack Extensions, many VST instrument plug-ins are pre-mapped and organized in logical modules and menus that completely reconfigure Panorama assignments as needed. For VST plug-ins that are not pre-mapped by Nektar, users can create their own customized VST maps, store and save for use in future sessions. Parameters are easy to assign using a simple Panorama control learn menu so there is no new software or GUI’s to learn.

A fourth Internal mode provides access to Panorama’s many generic controller keyboard functions for control of outboard MIDI equipment or other MIDI software. The Pads menu in addition makes it easy to create setups for various VST pad instruments with its 20 Pad-Map memory locations.

Cubase users will also benefit from Panorama’s unique QWERTY macro function which allows up to 8 QWERTY shortcut commands to be sent to Cubase with the push of one button or pad.

Pricing & Availability
Panorama will support Cubase, Cubase Artist and Cubase Elements version 6, 6.5 and 7. Earlier versions may be supported at the time of launch. The Cubase integration will be available as a downloadable update to existing Panorama users free of charge and is expected in March 2013.

About Nektar, Inc.
Nektar Technology, Inc is a California based Musical Instrument Company that has one mission: To bridge the gap between the incredible sonic and creational possibilities of today’s and tomorrow’s music software and the desire of musicians for tactile experience that makes it inspiring, playing software like an instrument.
When Nektar started in August 2009 they were looking at what would be the ultimate controller, a controller that is transparent to use. With the focus on the instrument aspect of a truly musical experience in combination with the sonic capabilities of modern music software, the team found a lot of room for improvement.
Nektar’s Panorama P4 Controller is the first testament to this concept. This Advanced Control * Advanced Workflow Keyboard seamlessly integrates with Propellerhead Reason adding a tactile user interface that makes it complete as a production and a live instrument.
To achieve this goal the team created an intriguing design, developed a new high class keybed and took care of all the mechanical and electrical engineering required to create this true musical instrument.