We’re excited to present Evolution Vintage Gent, the newest addition to our Evolution series. The sample library features an exquisite mid ’60s hollowbody electric guitar. One of the iconic sounds from the British Invasion, the model of guitar we sampled was originally a collaborative design by Gretsch and Chet Atkins–legendary guitarist, record producer, and pioneer of the Nashville Sound. 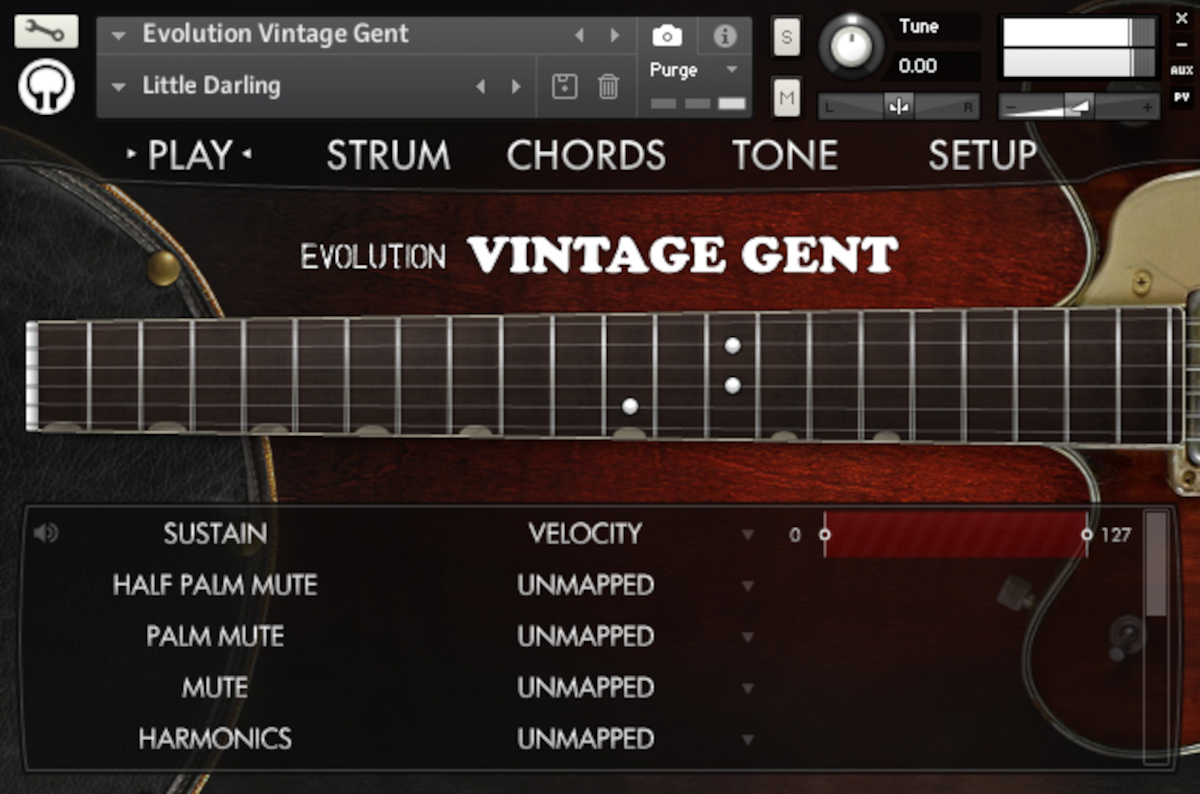 Evolution Vintage Gent features an exquisite mid ’60s hollowbody electric guitar. One of the iconic sounds from the British Invasion, the model of guitar we sampled was originally produced a decade earlier as a collaboration between Gretsch and Chet Atkins–legendary guitarist, record producer, and pioneer of the Nashville Sound.

This guitar represents the golden age of rock and roll, country, and rockabilly. It was a time period when guitarists started turning their volume up, and considerations had to be made to reduce feedback, while retaining the extra body to the tone that a hollowbody construction provides compared to a solidbody guitar.

The guitar’s two pickups were recorded as separate signals that can be blended to your taste within the sample library’s interface. That way you can get anything from a jangly bridge pickup tone to a beefy neck pickup sound and all the gradations between.

We developed the library in collaboration with Rosewood Recording Company, one of Utah’s most venerable recording studios. Guy Randle, the owner and recording engineer at Rosewood Recording Company, incorporated analog audio equipment to skillfully sculpt and emphasize the rich tonal qualities of the guitar. Evolution Vintage Gent includes both the as-recorded signal as well as an enhanced signal.

Evolution Vintage Gent is based on our Evolution engine, which provides you with a wealth of appointments: an innovative strumming pattern editor, automatic chord detection, and a comprehensive collection of built-in effects. If you’ve used any of our guitar or bass libraries that use the Evolution engine, its interface and workflow will be very familiar to you.

– Powerful mapping system that lets you set how you want to trigger articulations, using conditions such as velocity ranges, MIDI CCs, latching and non-latching keyswitches, and more.

– Articulations such as sustains, palm mutes, mutes, natural harmonics, plus special effects like string slaps, muted strums, and others.

– The articulations have 3 dynamics, 2 pick directions (when applicable), and 2x round-robin.

In addition to Evolution Vintage Gent being displayed in the Native Browser among your other Komplete Kontrol instruments, there are a variety of other benefits. For example, thanks to Native Instruments’ Native Map® technology, you can control the library’s various parameters directly through connected hardware right out of the box. Furthermore, the keyswitches and key ranges are shown using Light Guide, an innovative technology that displays the key colors directly on your Komplete Kontrol S-Series keyboard.

We recommend using Evolution Vintage Gent with a Komplete Kontrol S-Series keyboard for the full experience. While not a requirement, you will be able to take advantage of the Native Kontrol Standard for an intuitive connection between software instruments and hardware.

This product requires a total of 10.78 GB of free disk space in order to download and install the sample library. The total size of the download is 5.39 GB, and after installed the library occupies 5.39 GB.

Evolution Vintage Gent is normally $179 USD, but until January 1st you can pick up your copy at an introductory discount of $139.