ECHT, THE NETHERLANDS: virtual instrument and plug-in developer Rob Papen Soundware is proud to present particular time-limited upgrade offers on eXplorer-III, The Complete Rob Papen Synth & Effect Collection — combining all of its multi-award-winning Mac- and PC-compatible virtual instruments (including the recently-released RAW soft synth specialising in ‘distorted’ sounds specifically suited to electronic dance music production and beyond) and also all of its critically-acclaimed effects plug-ins into an attractively-priced performance and sound design dream bundle to die for — to owners of its paid-for products…  Within a year of release, eXplorer-III — the latest incarnation of Rob Papen’s powerful and all-encompassing software bundle — 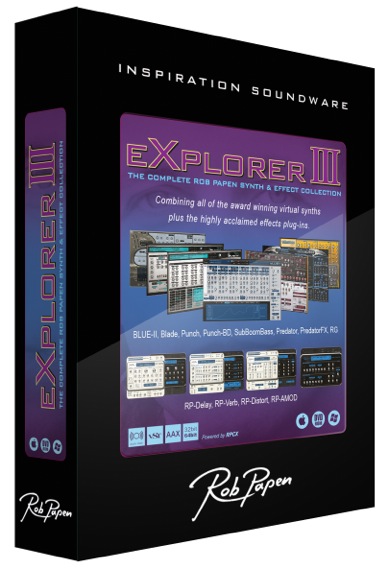 has expeditiously established itself as an all-important tool for many of today’s top music producers buying into namesake company founder Rob Papen’s superlative sound design skills, seeking to have his company exploits lend a helping hand to advancing their creative craft. Consequently, resulting music successes speak louder than words, despite the notable number of rave reviews that Rob Papen has evidently enjoyed with eXplorer-III. Either way, no complaints from Rob Papen — company founder or namesake company — here!  However, not everyone who has made a Rob Papen product purchase has yet to take musical advantage of the full eXplorer-III experience, something the company is fully aware of. Of course, customer loyalty is always an admirable attribute, so why not give something back to thank them for their patronage? Which is exactly why Rob Papen is determined to put a musical spring in their step this Spring by offering a number of generous discounts to qualifying customers until the end of May 2015.  Owners of Rob Papen’s EDM Synth Bundle (€299.00 EUR/$349.00 USD, including tax/VAT) or Urban Synth Bundle (€299.00 EUR/$349.00 USD, including tax/VAT) qualify to upgrade to eXplorer-III (€585.00 EUR/$699.00 USD, including tax/VAT) for €149.00 EUR/$149.00 USD (including tax/VAT), representing a substantial saving of €137.00 EUR/$201.00 USD (including tax/VAT). Owners of three of more Rob Papen products also qualify to upgrade to eXplorer-III for that same price, while owners of one Rob Papen product qualify to upgrade to eXplorer-III for €349.00 EUR/$349.00 USD (including tax/VAT). Note that only purchased plug-ins are eligible for these discounts and that any already-owned Rob Papen products automatically assume ‘Not For Resale’ status.  Similarly, owners of the original eXplorer bundle can upgrade to eXplorer-III for €119.00 EUR/$139.00 USD (including tax/VAT), while eXplorer-II owners qualify for a €44.00 EUR/$49.00 USD (including tax/VAT) upgrade — simply Login to the Rob Papen website (www.robpapen.com) and request the qualifying upgrade in the My Products section.  So what virtual instruments and effects plug-ins does eXplorer-III bring to the production table (or even desktop), then? 13 Rob Papen products are at hand to help you follow your musical muse, wherever it may take you, all adding a distinctly different flavouring to the mix. Choose from Blade (representing the cutting-edge of today’s synthesizers); BLUE-II (so-called ‘Crossfusion synthesis’ since it covers so much musical ground so effectively); Predator (‘phat’ analogue synth with killer presets and first-class features); PredatorFX (filter, modulation, and effects plug-in); Punch (speaker-busting, body-rattling drum machine); Punch-BD (based around the BD module of Punch to create the fattest-sounding bass drums); RAW (cutting-edge EDM synthesizer specialising in ‘distorted’ sounds specifically suited to electronic dance music production and beyond); RG (electric and acoustic guitar grooves with sequencer and synth effects); RP-AMOD (modulation effects to spice up vocal tracks, enliven instruments, or even beef up drums and loops); RP-Delay (with six delay lines, eight filters, four LFOs, reverser, and more); RP-Distort (for distorting and dramatically altering tracks); RP-Verb (advanced, transparent, and musical algorithm reverb); and SubBoomBass (ultra-deep bass synth with built-in step sequencer).  Surely there’s something in there to suit most musical tastes? One thing’s for sure. There’s never been a better time than now to upgrade to eXplorer-III… Inspiration Soundware at its very best, both value- and quality-wise! Wise up and expand your Rob Papen product collection today.
eXplorer-III can be purchased as a boxed version from authorised Rob Papen dealers worldwide for €585.00 EUR/$699.00 USD (including tax/VAT) or downloaded directly from Rob Papen here: http://www.robpapen.com/buy-explorer-3.html (Various unmissable upgrade options are also available to qualifying Rob Papen customers until the end of May 2015.)