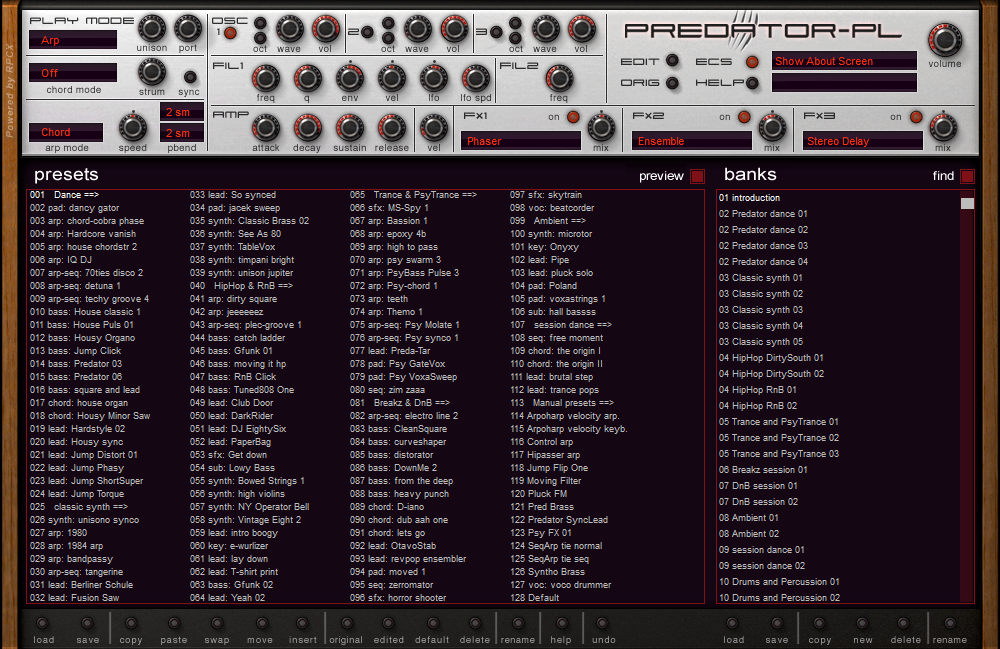 Rob Papen Soundware is proud to announce availability of Predator-PL — a preset-packed, easy-to-use edition of its popular ‘phat’-sounding soft synth — exclusive to Sweetwater (USA) and Music Store Professional (Europe) as of January 16…

As a powerful virtual instrument that successfully interweaves innovative design, uncompromising sound quality, and musical, production-grade presets designed to make tracks truly shine — whatever musical genre they might align themselves to, Rob Papen’s popular Predator soft synth has helped the cutting-edge company play a not inconsiderable part in defining contemporary cutting-edge music production. Just ask any of the umpteen well-known artists who have happily pronounced it their ‘go-to’ synth since its introduction in 2009!
But as cool and tweaky as cutting-edge virtual instruments often are — and let’s face facts here: you can’t get much cooler and tweakier than Predator, most keyboard players and composers spend more time searching through their favourite soft synth for the perfect preset than tinkering away at fashioning sounds for themselves from scratch. It’s a simple fact of life for today’s time-stressed, fast-moving music production professionals, sadly. So, with that very thought in mind, Predator-PL purportedly represents the perfect plug-in for those who favour cherry-picking from a large and varied collection of sounds over making detailed edits of specialised parameters.
With over 4,400 presets in varied music styles — from ambient to hip-hop, trance to dubstep, and anywhere in-between and beyond, there’s surely something in Predator-PL to suit anyone simply seeking a high-quality synth preset player. Moreover, many of those highly-usable presets have been created by none other than namesake company founder Rob Papen, a supremely talented sound designer in his own right with a formidable track record dating back many years to prove it!
That’s not to say that there’s no tweaking allowed here, however. Yet Predator-PL’s user interface is intentionally as straightforward and easy to use as possible. The upper half allows basic editing of the presets while the bottom half likewise lets users browse through that enormous preset library with the greatest of ease, even allowing them to build their own favourite banks by copying presets and storing their own edits and tweaks.
So surely there must be a catch here, right? Really there isn’t one. Other than the fact that Predator-PL is being sold online only as a direct download product exclusively through Sweetwater Sound for US-based buyers and Music Store Professional for appropriate European territories, the price is most certainly right!
So what are you waiting for? Point your browser at the relevant webstore and bag yourself a healthy slice of finest Inspiration Soundware, fresh from Rob Papen. Hungering after picture-perfect presets need not be the fruitless quest it once was. Nor need it involve raiding the piggy bank for the pleasure of satisfying an appetite for supremely-satisfying sounds!
Predator-PL can be exclusively purchased and directly downloaded as a Mac- and PC-compatible (AAX, AU, VST) virtual instrument from Sweetwater Sound (USA) for $59.00 USD and Music Store Professional (Europe) for €49.00 EUR via the following webstores:
Sweetwater: Link
Music Store Professional: Link