ECHT, THE NETHERLANDS: virtual instrument and effects plug-in developer Rob Papen Soundware is proud to announce availability of VECTO — a serious sound-shaping vector synthesizer that truly testifies to the creative company’s mover and shaker status in the wonderful world of Rack Extensions (RE) for Swedish music software application, interfaces, and technology standards specialist Propellerhead Software’s revolutionary Reason, billed by its creators as being about perfecting the process of music-making — as of June 10… 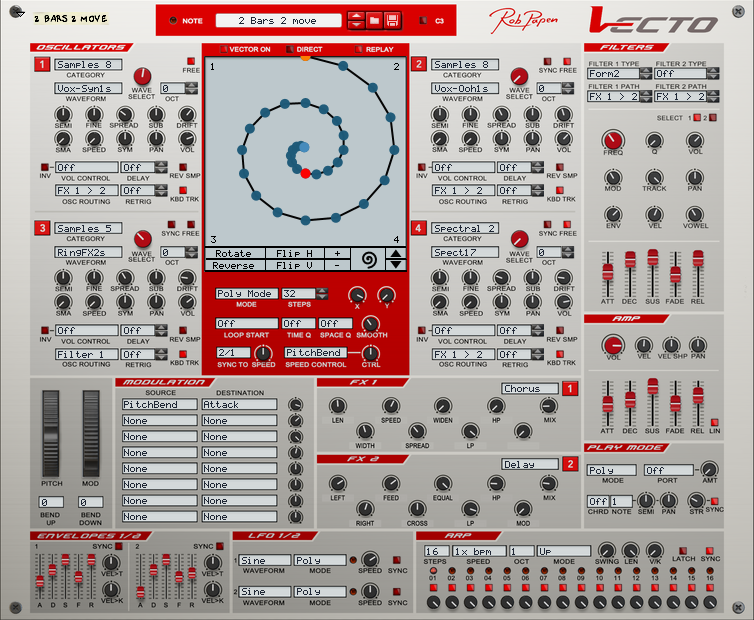 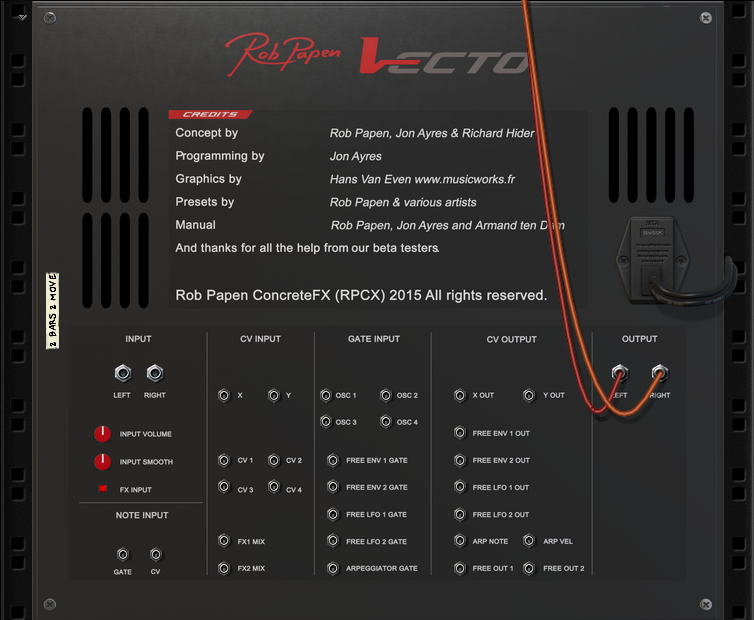 That Propellerhead’s proprietary platform has proven so popular is beyond reasonable doubt… and when the Swedish music software application, interfaces, and technology standards specialist first introduced its revolutionary Rack Extensions concept — custom-built plug-ins for Reason, Rob Papen himself promptly pronounced it as being “…a brilliant concept.” Continuing, he subsequently summarised its inherent value to the likes of his namesake company as well as added fringe benefits for all concerned: “Clearly, what we face as a developer is having to have a PC version and a Mac version, and if you run them in your regular host, you can crash your host. That’s a real big battle. People, if they use Reason, learn that things are connected. It’s cross-platform; everything works. It’s a major leap forward for Reason, and productions coming out of Reason will sound totally different. Reason remains Reason, but, now, it’s open.”  Open to the likes of Rob Papen — actually amongst the first wave of virtual instrument and effects plug-in developers — to develop distinctive and desirable third-party Rack Extensions for Reason. Revolutionary and evolutionary even, and they definitely don’t come much more so than VECTO, a serious sound-shaping vector synthesizer that truly testifies to the creative company’s mover and shaker status in the wonderful world of Rack Extensions. End game? Getting so much better all the time — to (partly) paraphrase another musical phenomenon — is perhaps closer to the musical mark, for Vecto veers towards another soft synth victory for Rob Papen, proof positive of how much musical mileage can be so successfully squeezed out of Reason Rack Extensions… safe in the hands of one of the most talented team of developers around, of course!  Cleverly, as implied by name, VECTO is a vector synthesizer that allows users to draw in VECTOR paths to shape the resultant sound in many wondrous ways. As always, it is presented packed with Rob Papen’s trademark flexible features and a profusion of professionally-programmed presets — remember: Rob Papen is a world-renowned sound designer in his own right, replete with a talented team of programmers, graphic designers, and fellow sound designers at his conceptual disposal — fashioned from four oscillators and much more besides. “After releasing QUAD, we decided to make more use of the X/Y pad, which appears in a lot of other Rob Papen AAX-/AU-/VST-compatible virtual instruments, such as Blade, BLUE-II, and RAW,” reasons Rob Papen. “The change in sound between the four oscillators offers a lot of sound options in itself, including drawing the movement between them, as well as preset movements and additional features like Time Quantize and Space Quantize. In fact, all movements are tempo-based and they can also be changed dynamically.”  Due to the wide range of oscillator waveforms on offer — from classic analogue models to additive, spectrum, and high-quality samples, the sound options are dazzlingly deep! Take two FILTERS, each with 28 different types to choose from, then try bringing two top-notch FX processors into the highly creative musical mix, and audio routing is brought to a blistering finish. Of course, multiple MODULATION options additionally abound, as do performance-elevating fanciful features such as a step-based ARP (arpeggiator). Adds Rob Papen: “The routing of the four oscillators is another cool feature of VECTO. Why? Well, instead of sending the oscillators direct to the FILTERS or FX, why not send an oscillator to another oscillator? This results in FM-type sounds. Or try combining that with two ‘normal’ oscillators. Each oscillator also has a special menu for additional volume control. But that’s not all. Each oscillator also has an option to ‘re-trigger’ the next sample in tempo-based values, or to delay the start of a sample. Besides this, there is a ‘sub-oscillator’ that even works in combination with the onboard samples! Surely creativity rules in every respect!”  Indeed, it does. Developmental homework having so stylishly paid off for all to see and hear, the time is right for Rob Papen himself to happily draw an appropriate conclusion: “Feature-wise, VECTO is a synthesizer that’s sure to keep the synth geeks happy. However, most important of all is the sound that it produces using those high-quality oscillators, FILTERS, and FX, because, ultimately, that’s what you hear.”  Herein lies the musical key to unlocking levels of programmability and playability hitherto unseen and unheard of in the wonderful world of Reason Rack Extensions… until now, that is. Indeed, VECTO variously represents another amazing soft synth deftly developed by the talented Rob Papen team to enable Reason to sound like never before, this time thanks to those varied and variable VECTOR movements. Make music… like no other. Over, then, to the Rob Papen founder for one final footnote: “This has always been our creative focus — developing inspirational synthesizers for making music, whatever the platform.”

VECTO can be purchased and directly downloaded for €99.00 EUR/$99.00 USD from the Propellerhead Shop here: https://shop.propellerheads.se/product/vecto-instrument/ (Purposefully, Propellerhead Software operates a 30-day try-before-you-buy service for those wishing to test Rack Extensions — simply click on the TRY button before committing to purchase.)