LINKÖPING, SWEDEN: high-end plug-in specialist Softube is proud to announce availability of Tape — a sonically versatile, yet easy-to-use tape emulation plug-in that models three types of reel-to-reel tape machine with distinctly different sound characteristics and offers several unique features without taxing CPUs or breaking the bank (with an introductory price of $79 and normal price of $99 after June 30) while the license itself includes a MixFX version for Studio One users called Tape Multitrack — as of June 7… 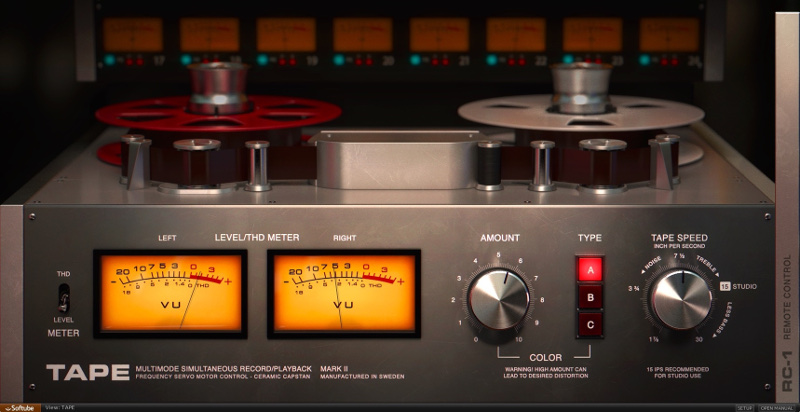 Softube’s Tape goes beyond existing tape emulation plug-ins in several ways. First and foremost, it effectively displays three distinctly different tape machine characteristics in one plug-in: TYPE A is based on a classic Swiss high-end reel-to-reel design, generally known and admired for its precision and linearity; TYPE B is a much more colourful affair — a transformer-based machine that adds weight and creaminess to the low end; and TYPE C is based on a British tape machine with a visible vintage vibe. Users need not necessarily look any further than simply selecting a tape machine TYPE, then adjusting the associated AMOUNT control to add COLOR to taste. In most cases, tweaking these self-explanatory controls are all it takes to soak tracks in analogue tape sweetness. Sweeter still, load up one of the included presets from award-winning engineers, such as Joe Chiccarelli (Beck, Strokes, U2) and Howard Willing (Kris Kristofferson, Sheryl Crow, Smashing Pumpkins), and you’re good to go!

Going further is, of course, perfectly possible with Tape. Users can control TAPE SPEED (which includes tape speeds that do not actually exist in the real world), as well as SPEED STABILITY, channel CROSSTALK amount, balance the DRY/WET signal, and access other unique features, such as the mastering-grade HIGH FREQ TRIM filter — which adds a smooth treble boost — and RUN STOP sound effects.  Tape is available as a standard plug-in that will run on any DAW that hosts AAX, AU, or VST formats. For Presonus Studio One users, there are some added extras. Not only can they also use Tape as a standard plug-in, but it is also available as a MixFX plug-in called Tape Multitrack, with selectable crosstalk between individual tracks and control of all instances of the plug-in from a single interface. The Tape and Tape Multitrack license is one and the same, so someone buying Tape then later switching over to using Studio One already has Tape Multitrack installed, licensed, and ready to go. Either way… no tape-opping required!

Tape is available now from Softube’s website and from authorized dealers around the world. The list price is $99, but it is available at an introductory price of $79 until June 30, 2017.