LONDON, UK: Spitfire Audio is proud to announce availability of LONDON CONTEMPORARY ORCHESTRA TEXTURES — accessing an awe-inspiring aircraft hangar for facilitating a recording process like no other on its second collaborative venture with the internationally-acclaimed London Contemporary Orchestra (LCO), served up as a sophisticated collection of constantly-evolving organic textures to truly expand anyone’s sound palette — as of January 24… 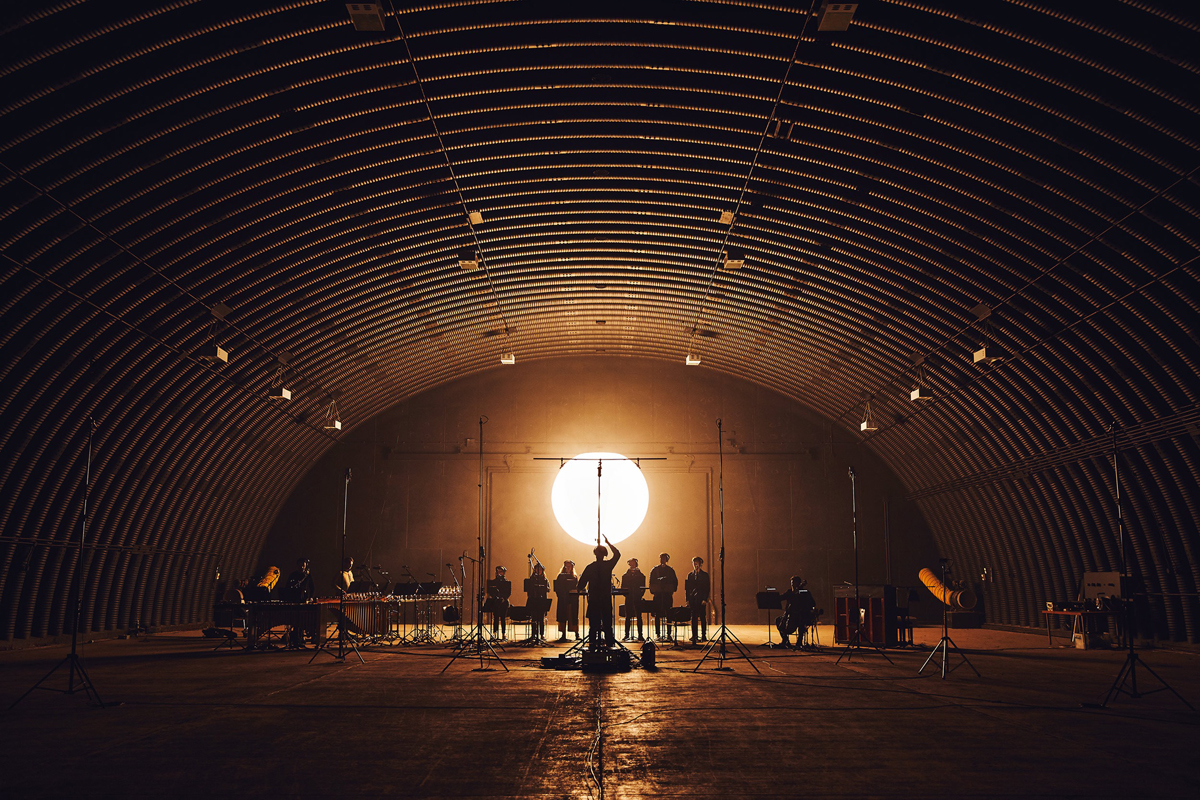 Following in the hard-to-follow footsteps of the critically-acclaimed and continually commercial LONDON CONTEMPORARY ORCHESTRA STRINGS, Spitfire Audio’s next collaborative venture with the LCO — one of the UK’s most innovative and respected ensembles, promoting the best new music and cross-arts collaborations to an ever-widening audience — had to be something even more extraordinary. End-game? An ambition to collectively create something that no one in the sampling world had done before. But surely that’s easier said than done? Perhaps.

Partly inspired by the LCO’s work with Brit alt-rockers Radiohead’s frontman Thom Yorke on his music for Italian director Luca Guadagnino’s 2018 remake of fellow Italian director Dario Argento’s assertive horror masterpiece Suspiria, ‘Spitfire & Co.’ took familiar, pre-existing organic instruments and combined them in unique ways to create indefinable, expressive, and modern sounds and textures — much like an artist using an array of disparate colours to create a new, multi-tonal palette, marrying together the LCO’s world-class performers and 10 years’ worth of experience in the contemporary classical music and film world with Spitfire Audio’s superlative sampling expertise and experimental Evo Grid technology. Think breakthrough British EMS VCS3, which made musical history upon its introduction in 1969 by being the first commercially portable synthesiser available anywhere in the world, thanks to its innovative modular matrix-based patchboard dispensing with the
telephone exchange-like cabling of other (much larger) modular systems in favour of making space-saving connections with (removable) coloured pins; part of the genius of today’s LONDON CONTEMPORARY ORCHESTRA TEXTURES sample-based virtual instrument library lies in its inspired interface it shares with other Spitfire Audio products. Positioning ‘pins’ via an onscreen 10 x 32 grid arrangement allows access to recordings across 12 intervals — in this instance, instantly select which Evo (evolution) sits on each of those 12 key ranges, or generate randomised evolutions.

Enjoying instant gratification with those engaging and inspiring long articulations that change sometimes subtly and sometimes radically over time before looping — organised in a VCS3 grid-like fashion with (almost) infinite possibilities and giving unexpected results — is a given. Get this, though. Those evolutions have become widely adopted amongst the composer community as the most effective means of easily writing music that is able to subtly change over time without variation in melodic content. Creatively speaking, those textures — this time even highlighted in the titling of the LONDON CONTEMPORARY ORCHESTRA TEXTURES library itself — can then be developed, processed, and shaped further, offering a rich range of possibilities.

Put it this way: what really separates LONDON CONTEMPORARY ORCHESTRA TEXTURES from what has gone before it is the unlikely location chosen to record its namesake source material. Musically speaking, achieving a stunning, spacious sound involved finding a uniquely vast performance space, which led the LONDON CONTEMPORARY ORCHESTRA TEXTURES team to Old Jet, a decommissioned aircraft hangar in Suffolk, England. Originally built to test American fighter planes, its soundproof qualities and a remarkable 10-second reverb tail made it the perfect setting from within which to blend and bring to life the multifaceted, otherworldly textures to which the resultant release owes its notable name.

Needless to say, Spitfire Audio’s Harry Wilson worked in close collaboration with the LCO during every step of the way, with much attention to detail required when recording in such an extraordinary live space since even the smallest sound could crucially disturb a carefully crafted take in what was meant to be a controlled environment. Enter LCO Co-Principal Conductor and Artistic Director Hugh Brunt with a thoughtful take on Old Jet’s inspirational influence on the productive proceedings therein: “You don’t have to create too much sound to agitate the air — what you receive back from the room is an incredible richness of overtones and warmth of sound. We discovered sounds that you couldn’t create without that space and orchestration — for example, a harpist bowing in an attacked way gives you a lot of high end which normally dies away quickly, so we added viola and cello harmonic sul pont to lengthen that attack and pick up the overtones, while the room strengthened its resonance.”

Recording reality dictated that the LCO’s process of workshopping welcomed creative input from each of its world-class performers added character and colour to each note carefully captured for LONDON CONTEMPORARY ORCHESTRA TEXTURES, as attested to by fellow LCO Co-Principal Conductor and Artistic Director Robert Ames. “We were in a position where we could be completely experimental; in that space, certain notes and articulations would ring in a certain way, so we played off that and changed things accordingly,” he notes, before adding: “Writing for a long reverb is a really fascinating thing to do. Trying to predict how the space is going to feed back into the notes you’ve written for is a really interesting thing. To have an orchestra to play with when curating these sounds… it’s like the ultimate synthesiser!”

So, from conception to recording, the process was clearly curated and orchestrated in intricate detail. In selecting the instrumentation for each group of textures, the LONDON CONTEMPORARY ORCHESTRA TEXTURES team collectively focused on the idea that every musical sound can be broken down into three distinct areas — namely, the hit at the front, the sustain in the middle, and the decay or release at the end — and then chose a select instrument or ensemble to inhabit each of those areas, blended together and lengthened by the resonance of the vast space involved. Indeed, all concerned managed to retain the intimacy and expression of each sound by keeping the ensemble small and only recording up to five musicians at a time. Those combinations of instruments were subsequently split into four groups — Ethereal, Mercurial, Quantum, and Astral — appropriately named in keeping with the soundscapes evoked by each bespoke combination. All are distinct in orchestration, techniques, and evolutionary style, but are also designed to compliment each other when layered together. This experimental approach allowed Spitfire Audio to take the resultant sounds to a completely new space, using unconventional techniques, such as introducing vibrating foreign objects to the instruments; experimenting with quarter tone variants, adding fifths and extra octaves; introducing a variety of bowed textures — bowed harp, bowed marimba, bow hairs threaded through piano strings; and singers using different parts of their voices to create raspy tones.

The recording expertise and acclaimed Evo Grid technology attributed to Spitfire Audio adds extra dimensions to each sample, so LONDON CONTEMPORARY ORCHESTRA TEXTURES users ultimately are offered a distinctive, ever-changing kaleidoscope of progressive techniques with instant playability. Performers can choose between a range of mic positions for extra control — Close, Tree, Ambient, and Outrigger; add plate reverb; or stretch the samples on each individual texture to taste. The Close mics yield much closer attention to detail, while still giving a sense of the expanse and warmth of the supersonic-sounding space within Old Jet! Jesting apart, every sound has been mixed by renowned engineer Joe Rubel (who has worked with the likes of Brit singer-songwriter extraordinaire Ed Sheeran), with an option to choose his definitive mix.

Musical mission accomplished, Robert Ames appropriately signs off by airing his hopes and dreams for the dream library latest that is LONDON CONTEMPORARY ORCHESTRA TEXTURES: “My hope for composers is that they get a taste of what it’s like to be with the LCO in the studio — a snapshot of the kind of creativity that happens between composers, orchestrators, and musicians, distilled into a library.” A library like no other, no less. Literally through the power of sampling, Spitfire Audio again succeeds in creating new instruments that could not be recreated outside a sampler — making the impossible possible!