PARIS, FRANCE: avant-garde musical hardware researcher and developer Squarp Instruments is proud to announce that it is already accepting preorders on its inaugural Pyramid Polyrhythmic Sequencer breakthrough — an advanced hardware standalone sequencer running proprietary PyraOs realtime processing firmware and boasting (multiple) MIDI, USB, CV/Gate, and (Sync48- and Sync24-configurable) DIN Sync connectivity, together with a host of fanciful features belying its compact and bijou form factor — as of May 21…

Most notably, and arguably an absolute rarity in this day and age, Pyramid Polyrhythmic Sequencer is fully polyrhythmic, meaning different and unusual time signatures can be set for each of its 64 tracks to cleverly create shifted-beat sequences — set a track to 4/4 and add other tracks to simultaneously run with it in 5/4, 6/8, 15/8, or whatever — to bring stirring new musical flavours to productions. Pyramid Polyrhythmic Sequencer… it is incontestably an appropriate appellation, after all! Apart from that, though, what makes this standalone sequencer so special and also why resolutely return to hardware in this day and age of commonplace software-based sequencing solutions, courtesy of all-singing, all-dancing DAWs (Digital Audio Workstations)? 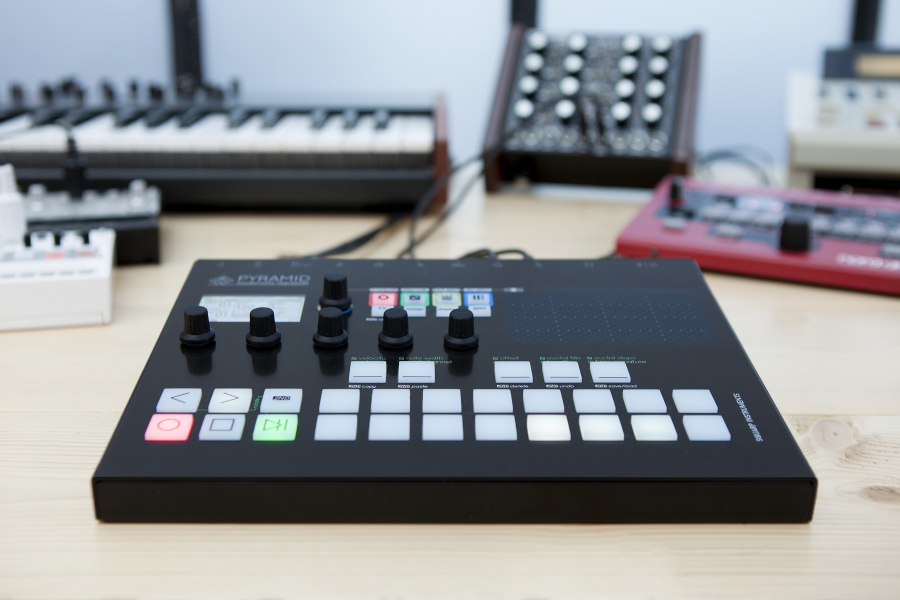 Well, to truly get a feel for the flexible future of state-of-the-art and easy-to-use hardware sequencing in the present, perhaps it pays to look to the past? Which is exactly what the forward-thinking research and development team at Squarp Instruments did. “Our aim was to create a hardware sequencer in ‘sync’ with the new styles of electronic music being written nowadays,” notes company co-founder and R&D engineer Tom Hurlin. “There’s a huge gap in the market for this, which is kind of weird, because most popular music from the early-Eighties to the late-Nineties was produced using sequencing hardware. Hip-hop, for example, originated on the MPC series, which actually revolutionised all kinds of music — Madonna to Bryan Ferry to Whitney Houston. How come these machines were suddenly replaced by the computer?”  Good question. One which Squarp Instruments musically meditated on while dreaming up the knockout conceptual design of Pyramid Polyrhythmic Sequencer. So, by cleverly combining computer, sequencing software, controller, and interface, the robust result is an amazingly accomplished sequencing solution that is as practical in use as it is easy on the eye while its road-ready aluminium casing merely measures 268 x 206 x 44 mm. Muses Tom Hurlin: “We felt that we had to create a machine that you could really feel — one that could satisfy any musician from any musical background. We wanted to have nice and playful controls, such as a multipoint touchpad, which was inspired by Korg’s Kaoss Pad and Kaossilator, and to be able to go from basic four-on-the-floor house beats to very experimental rhythms. Really, the important thing is that if you go from the computer to Pyramid then you don’t feel frustrated. The machine should enable you to do exactly what you had in mind when you started working with it, but also allow for some happy accidents along the way when tweaking!”  Two years of research and development, three prototypes, and multiple musical dialogues with various live and studio-based artists later, the cutting-edge electronics and advanced (updatable) firmware — the realtime processing PyraOS operating system allows any parameter to be controlled on the fly and any changes to be listened to immediately — implemented in the production Pyramid Polyrhythmic Sequencer makes for a standalone sequencer par excellence, enabling users to agilely access a wide-ranging workflow based around 64 tracks. Each track can be up to 64 bars in length and acts as a loop that contains polyphonic or monophonic notes, automations and effects, plays repeatedly and controls one of the electronic musical instruments connected to the MIDI 1, MIDI 2 +sync (DIN Sync), CV, and USB outputs. Of course, those instruments could be hardware (such as drum machines, synthesizers, and modular synth systems), virtual instruments (running on a connected computer or even an iOS device, such as Apple’s all-pervasive iPhone smartphone or iPad tablet), or combinations thereof. The full flexibility of CV, G (Gate), and ENV — useful for sequencing any voltage-controlled parameter, such as an envelope generator or filter — connectivity will absolutely appeal to modular synth system aficionados, all the more so since the ever-present Eurorack small-format modular system is increasingly being popularised (and heavily populated) by an ever-growing band of merry ‘boutique’ manufacturers now numbering hundreds worldwide!  With Pyramid Polyrhythmic Sequencer’s high-precision clock, rest assured that the sequencer itself is a superlative synchronisation tool for vintage and modern devices alike. All connected instruments will always remain perfectly in time, however rhythmically complicated those polyrhythmic sequences end up being — by grand design or happy accident! And with whatever users choose to connect to wherever, workflow is cleverly conceived for both stage and studio use, courtesy of four clear-cut, colourful (and colour-coded) modes. Make musical patterns from scratch and program MIDI effects and automations in (red) LIVE or (green) STEP modes by recording performances using the built-in one-octave keypad and so-called smartpads — each configurable as a chord harmoniser, advanced beat repeater, or scaled piano — or creating rhythms and melodies with the self-explanatory step sequencer, then manage and arrange tracks in (yellow) TRACK or (blue) SEQ modes by muting/un-muting tracks on the fly to build songs live or arranging and linking sequences — groups of muted/un-muted tracks — to create complete, structured songs.  Similarly, Pyramid Polyrhythmic Sequencer’s hands-on hardware user interface includes six accurate and clickable encoders, a wide, multi-finger touchpad, and an accelerometer — all of which can easily be assigned to an effect parameter, a MIDI CC message, or even the two CV inputs! Beautifully backlit, the white LCD clearly highlights all functions, fanciful or otherwise. One particularly noteworthy mention must go to the algorithmic euclidian sequencer engine available to each track to auto-generate atypical and rich rhythmic patterns… plucky users can change the number of total steps, the number of filled steps, the step width, and rotate the pattern — again, all on the fly!  For the keyboardist seeking a powerful performance partner to get the most from their chosen instrument, the live performer looking for a complete sequencing solution to help handle their set, or the studio musician making music from scratch, Squarp Instruments’ innovative Pyramid Polyrhythmic Sequencer surely delivers. Hardware sequencing is back with workflow advancement and flexible features to musically die for. Vive la standalone sequencer!