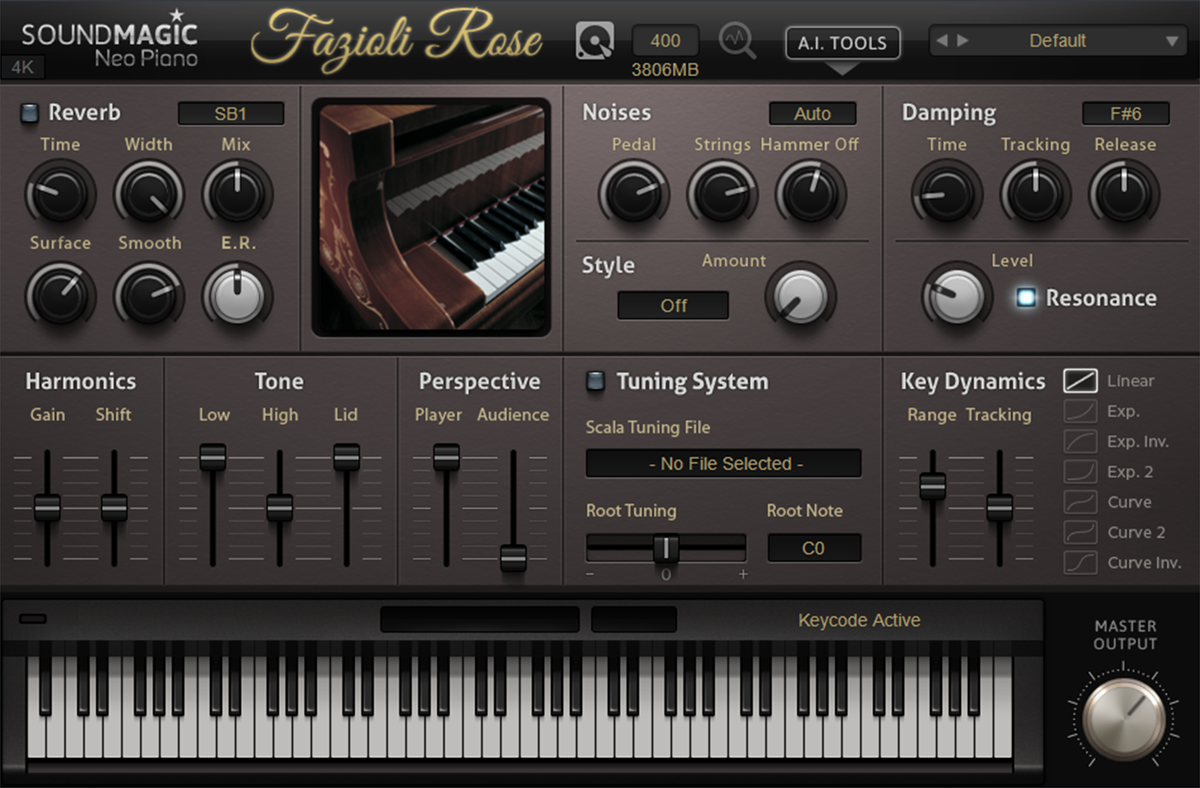 As a dynamic combination of four first-rateFazioligrand pianos of varying vintage,Fazioli Rosegives musicians of all skill levels more freedom tocreate beautiful music and unmatched artistry all of their own. After all, all pianos sound distinctly different, as is also the case,clearly, with this cuttingedgehybrid virtual instrument’s featured four:Fazioli “Brunei”isalimited-edition custom design of F308, this model was handcrafted in Italy and is one of the world’s most expensive and renowned concert grants. Famous for its expressive, dynamic, and clear highs that sing with clarity, this versatile sound fits into all types of genres.Fazioli F308really set itself apart from standard manufacturers, the Fazioli F308 features 97 keys, a 4th pedal, and expressive sound all in one dynamic package with sweet, singing highs, immense power, and a rich, distinct tone.F308 Basslordis another F308 but with special mic positioning that closer to the bass strings, the charming, yet powerful bass hits the sweet singing highs and makes you feel as if you’re sitting in front of a genuine 10” grand.Fazioli F275is the latest model 275 from Fazioli, it’s inherited all the classic sounds you love with enhanced clarity on highs. This makes it more suitable for today’s most popular music genres, such as pop, rock and jazz.

Get this, though: thanks to the trailblazing technology that The Best Computer Music And Acoustic Technology Inc incorporates into its virtualinstruments, Fazioli Roseis, in essence, an instrument with a musical soul rather than a machine-like feel —an admirable attribute that sets it apartfrom an abundance of solely sample-based virtual instruments out there that it could conceivably be pitched against. As such, textually making anappearance on a GUI (Graphical User Interface) that is as easy on the eye as it is to use —albeit actions always speak louder than words, the newNeo Pianoengine powering Fazioli Rosereally represents the pinnacle of sound sampling since it lets users effectively express more than 1.6-millionsounds on a single note —numerically speaking, this achieves 400 times more variations than a ‘traditional’ sample engine! Every note played isunique, creating vivid sound representation by striking a rich, accurate tone —even with minimal movement.

Musically, then, through using hybrid modelling technology, The Best Computer Music And Acoustic Technology Inc has succeeded in creating aunique experience —exploited to the full with Fazioli Rose—that allows its users to reap the benefits of authentic sampled sounds combined withthe playability of a modelled piano, providing for more freedom of expression and potential possibilities to create their own unique sound. Centralto this, that new Neo Pianoengine elevates proceedings, purportedly by being the industry’s first large-scale application of AI (artificial intelligence)in its software developing phase. Put it this way: while it is common knowledge that recording, editing, processing, and organizingsuch hugesample data pools can collectively take teams of expert engineers years to complete, conversely AIcan conceivably reduce this titanic task to amatter of hours, meaning musicians get their hands on better products much more quickly while also benefitting from financially reduced rates.

Furthermore, that beautifully-implemented Fazioli RoseGUI gives users unmitigated control over 40 piano attributes, including an ability to lift the lid,tweak Tone and Harmonics, alter Damping, change Key Dynamics, and adjust velocity response. Ultimately, users can even apply a Style —setsthe piano in question’s musical style, be it classical, jazz, rock, orsoft, and changes the internal parametric EQ accordingly via a simple Amountcontrol —or sympathetic Resonanceto their sound, and adjust the mix by changing microphone Perspective.