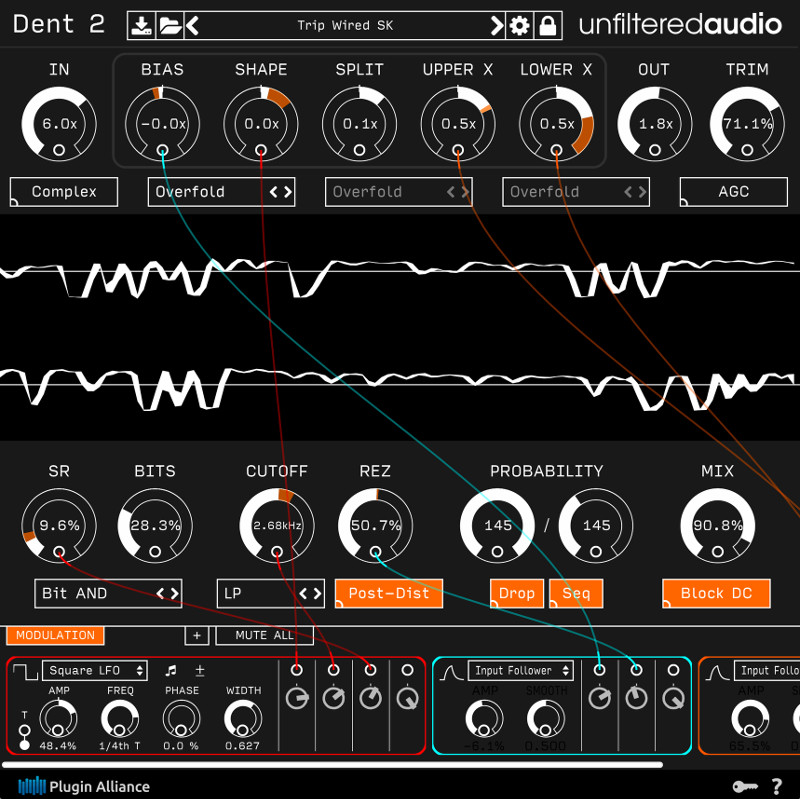 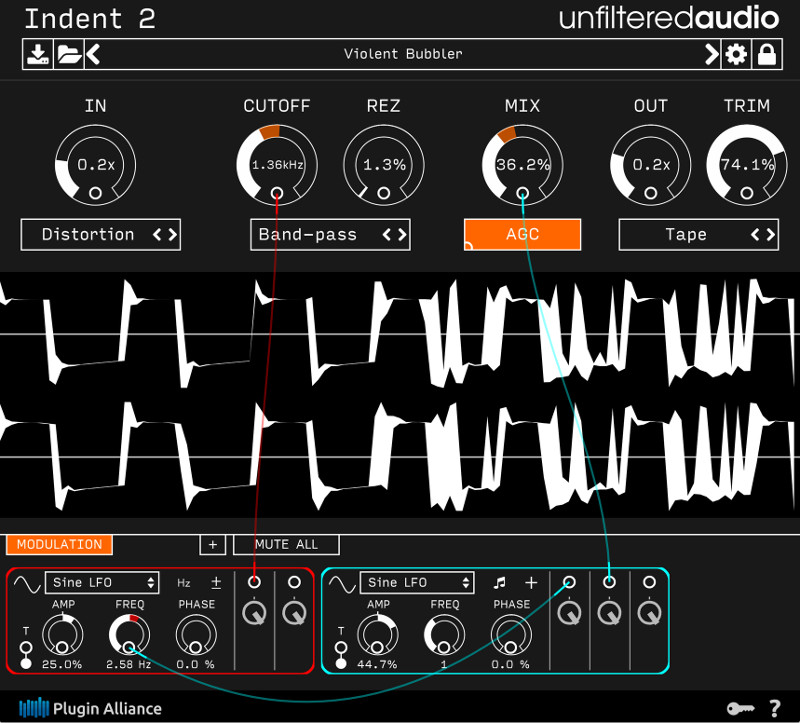 Unfiltered Audio’s original version of Dent was a very different kind of distortion plugin, produced by the cutting-edge Californian company to enable every engineer and sound designer who had ever longed to manipulate waveforms on a molecular level to do just that. Now, with the release of Dent 2, audio control freaks can really rejoice since this time its creators have gone subatomic… we’re talking about a let’s-sharpen-the-peaks-on-the-negativehalf- of-the-waveform level of control here! However, those seeking sweet analog hardware emulation are advised to look elsewhere since those mad scientists at Unfiltered Audio are digital to their core… collectively, they truly know how to turn those ones and zeros into musical magic!
Any audio making its way into Dent 2 is first met by the plugin’s freely-adjustable and highly-customizable sample reduction engine. Next, the signal passes through as many as three different distortion types in series, selectable from among ten unique clipping algorithms. Within those gain stages, users can add or subtract a DC (Direct Current) BIAS, adjust the waveform’s SHAPE by flattening or sharpening it, and independently adjust the positive and negative (UPPER X and LOWER X) halves of the waveform. Thereafter, the bitrate engine is a continuous and automatable parameter with six different Bitcrush algorithms. After that, the audio finally passes through one of four different resonant filter types — that is, unless, of course, the user opts to position the filter at the beginning of the signal path, rather than at its end. Even making the filter position dynamic is perfectly possible — alternating on dotted eighth notes between placements at the beginning and the end, for example. End users can freely witness creative possibilities really starting to unfold before their eyes and ears!
Even experienced sound designers would be hard-pressed to dream up a wave-shaping scenario that cannot be customized by Dent 2 with exacting precision. Put it this way: what about a broken guitar amp that has an interesting sound? Easy. Emulate it by adjusting the PROBABLILITY controls so that Dent 2 randomly applies distortion to only 70% of the audio signal’s wave cycles. Or take things a step further forward by flipping on the Drop switch to silence all the undistorted waveform segments. Subsequent setting of the clipping type to Tape and the filter type to Low Pass puts things into the realm of emulating the sound of an cassette that has been chewed by a tape deck. Dent 2 does it all.
And here is the best part: almost all of those parameters can be modulated with Unfiltered Audio’s unique and intuitive modulation system. Simply assign a parameter by using a virtual patch cable, then select from eight different modulators, including LFOs (Low Frequency Oscillators), a randomizer, and even a user-programmable step sequencer. So using a sine-based LFO on the filter frequency, for example, can produce a conventional wah effect, or setting the filter to Band Reject mode and applying the step sequencer can create a Leslie effect with syncopated rhythms. Moreover, modulating DC offset with an input follower makes a snare drum track with hi-hat bleed sound like heavy machinery pounding away on a demonic assembly line!
Letting loose with more hands-on control options in Dent 2 is perfectly possible, too, thanks to Unfiltered Audio’s recently-developed ROLI Lightpad modulator making for seamless integration with ROLI’s latest controller, users of which can creatively apply simple gestural controls to modulate Dent 2 parameters in real time. The Lightpad’s three-dimensional interface is in a class by itself, so can easily be used to modulate multiple parameters or even modulate other modulators! Alternatively, apply a step sequence modulator to the sample rate, then use finger pressure to scale the modulator’s amplitude. Applying the X and Y axes to the filter’s CUTOFF and REZ (Resonance) parameters to ‘draw’ filter envelopes on the Lightpad’s surface during live performances likewise puts this killer creative combination into its rightful perspective.
Indent 2’s signal path, meanwhile, consists of a customizable multimode filter, sandwiched between two different clipping stages, both of which offer the same ten different user-selectable saturation modes found in Dent 2: Hard Clip, Soft Clip, Wavefold, Overfold, Harsh Fold, Distortion, Tube, Tape, Gloubi, and Cubic. Including a filter in the plugin’s internal signal path dramatically expands its versatility, so it is easily adaptable to a broad range of waveshaping tasks. Try adding a modulated, resonant High-pass filter after the first clipping stage to get an old-school techno sound on a synth bass track, then set the second clipping stage to Wavefold to smooth out the signal and bring back some of the harmonics that were cut off by the filter. Further experimentation shows that Indent 2 can imbue an almost endless range of tones and emotions for any musical genre, and — like its Dent 2 bigger brother — almost all of its parameters can be modulated by that same intuitive and unique Unfiltered Audio modulation system, supporting seamless integration with ROLI’s Lightpad controller.
Dent 2 and Indent 2 both benefit from several key upgrades since v1, including two new modulators added to the modulation section (Step sequencer and ROLI Lightpad); six new saturation modes; new Complex Mode (gives Dent 2 users the option to apply a different saturation algorithm to each of the three clipping stages); multimode filter; AGC (Automatic Gain Compensation); and OpenGL toggle switch.
So, whether working with a toolkit that can expertly soothe, saturate, or strangle sounds beyond recognition (Dent 2), or an intuitive and sleek saturation/tone box with a powerful modulation system (Indent 2)… don’t just distort it, dent it.

Dent 2 and Indent 2 are available for purchase — as AAX Native-, AU-, VST2-, and VST3-supporting plugins for Mac OS X (10.8 through 10.12), Windows (7 through 10), and Pro Tools 10.3.10 (or higher) — exclusively from Plugin Alliance for $99.00 USD and $49.00 USD, respectively.
(Owners of Dent can upgrade to Dent 2 for free at any time, while a time-limited promo offer allows owners of Indent to upgrade to Dent 2 for $29.00 USD until September 30, 2017; either way, customers upgrading to/purchasing Dent 2 will receive Indent 2 for free.)
Fully-functional, 14-day trials are available to anyone registering for a free Plugin Alliance account here:
http://www.plugin-alliance.com/en/registration.html
Note that the proprietary Plugin Alliance Installation Manager means users can select, download, and install only the products and formats needed for their system.
For more in-depth information, including several superb-sounding audio demos, please visit the dedicated Dent 2 webpage here: https://www.plugin-alliance.com/en/products/unfiltered_audio_dent_2.html
For more in-depth information, including several superb-sounding audio demos, please visit the dedicated Indent 2 webpage here: https://www.plugin-alliance.com/en/products/unfiltered_audio_indent_2.html
Watch Plugin Alliance contributor Charles Stella and artist/producer Logan James showing how to use Dent 2 and Indent 2 to get anything from gritty saturation and attitude on drums to reality-defying wave modulation and harmonic
destruction on vocals in this demystifying demo video: https://youtu.be/GfpTkUlF0gA