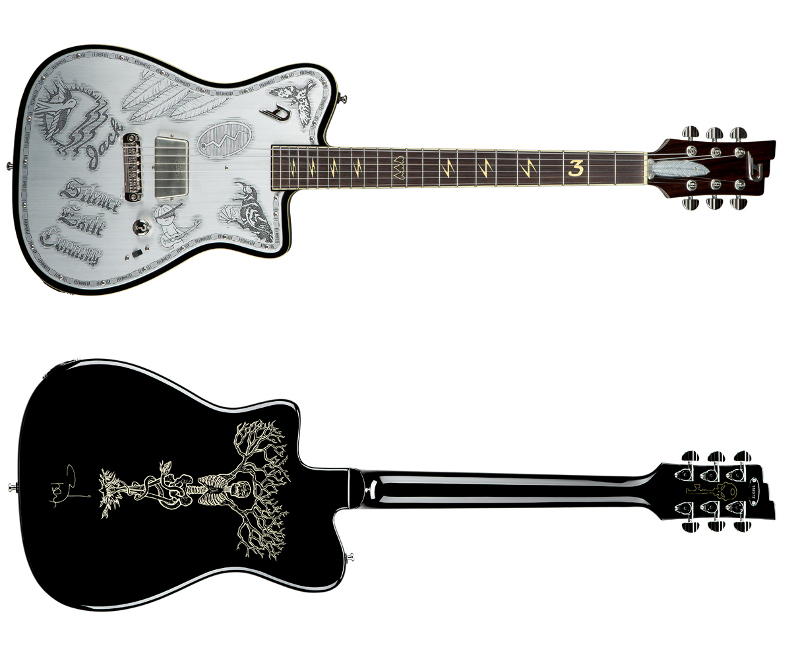 Best known for his character Jack Sparrow in the Pirates of Caribbean movies, and his affiliation with writer and director Tim Burton, Johnny Depp has been one of the most in-demand actors of the past 20 years. But a not-so-little known fact is that the guitar has been a lifelong passion for the actor/musician, who has been quoted as saying “Music has always been my first love,” and who has shared stages and graced recordings with artists such as Aerosmith, the Black Keys, Tom Petty, Paul McCartney, Alice Cooper, Oasis and Ryan Adams. Owning an enviable collection of vintage instruments, Johnny has been a long time fan and owner of Duesenberg Guitars.

Nathan Fawley of Duesenberg USA says: “In working with Johnny on this project, which took over one full year, we wanted to do something that was about Johnny on a personal level, and if there’s anything that tells Johnny’s life story, it’s his tattoos. Each one symbolizes a significant event in his life. Our goal by incorporating Johnny’s tattoo’s onto the guitars was truly to make this not only a piece of art, but a great guitar in the Duesenberg tradition. Ingo Renner and Dieter Gölsdorf (co-owners Duesenberg Hanover Germany), had the task of building and designing an iconic guitar for one of the most recognizable people in the world – with the key being to build a guitar we all would want to play – and we feel that we have done just that.”

At this January’s NAMM, Duesenberg will release the limited Johnny Depp signature guitar, with only 52 of the hand signed guitars available worldwide. This unique guitar will display the details, workmanship and sound for which Duesenberg is famous, as well as a number of features which are new to the Duesenberg tradition. A production version will be released later, with a portion of the proceeds going to Johnny’s charities.

Duesenberg Guitars, from Hannover Germany, has made some of the most acclaimed guitars in the last 20 years. The Duesenberg Artist Series guitars have included custom designs for Ronnie Wood of the Rolling Stones, Mike Campbell (of Tom Petty and the Heartbreakers 30th Anniversary), Dave Stewart of Eurythmics, and of course the 40th Anniversary Eagles Signature Guitar.