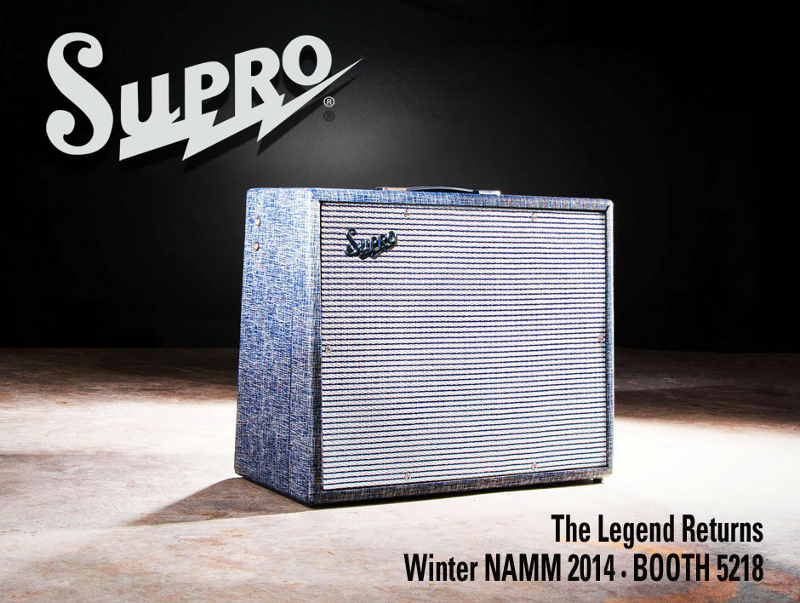 Absara Audio LLC, parent company to ground- breaking analog effect brand Pigtronix, is proud to announce its acquisition of the historic Supro trademark—pertaining to both amplifiers and guitars—worldwide. To accommodate this expansion, Absara Audio has constructed a new production facility in Port Jefferson Station, NY and will begin shipping a line of USA-made, vintage-inspired Supro tube amplifiers in April 2014. The rights to the Supro brand were acquired in September from former Fender amp designer and long-time Pigtronix associate, Bruce Zinky. Zinky has been retained as exclusive design engineer, and has collaborated with award-winning sound designer David Koltai to realize a modern incarnation of the Supro sound that has been out of production since the mid ‘60s.

Supro’s origins can be traced back to the early ‘30s when the National Resophonic and Dobro guitar companies merged to form a manufacturing entity called Valco. As electrified music started to emerge, Valco began producing guitars and amplifiers under the Supro name. Supro amps delivered the tone of choice for the early ‘60s south-side Chicago blues players who in turn influenced the British invasion. By the late ‘60s, Jimi Hendrix was playing a Supro Thunderbolt amp on tour with Little Richard and the Isley Brothers, meanwhile, in England, Jimmy Page, inspired by the raw tones of the Chicago blues scene, cut seminal Led Zeppelin tracks using a Supro Model 24. The Supro tone has gained enduring notoriety as a unique and commanding voice—never a copy, clone or wannabe of any other major make of amplifier.

“We are humbled by the opportunity to re-imagine the Supro product line in a way that honors its rich history and will push these classic designs to the forefront of the modern tube amplifier industry.” – Pigtronix co-founder, Brian Bethke

USA-made reissues of the most sought after Supro amps will be unveiled to the world at the Winter NAMM Show in Anaheim, California, January 23-26, 2014 (booth # 5218). At that time, a press release will provide further details on the products and launch.