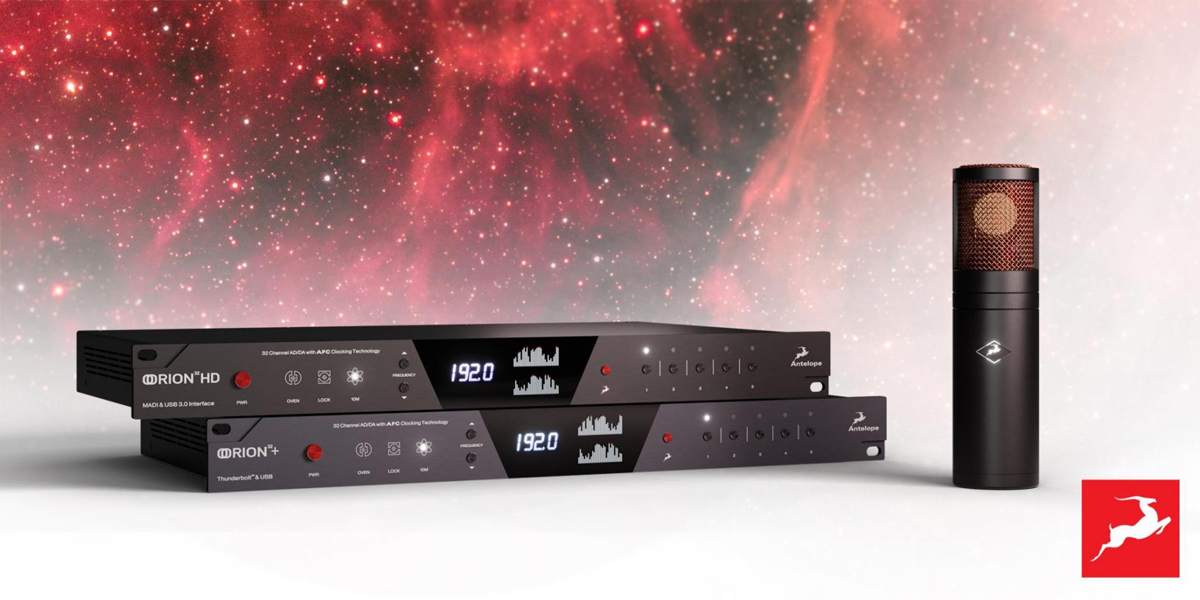 Offering low-latency recording and playback of up to 64 simultaneous 24-bit/192kHz audio channels via Thunderbolt™ and up to 32 audio channels over USB, Antelope Audio’s latest addition to its ever-expanding range of innovative interfaces connects seamlessly with any DAW (Digital Audio Workstation) on a Mac or PC. Powerful flexibility for easy workflow integration is all there for the taking, thanks to the colour-coded software routing matrix with four separate mixers, effects chaining, and zero-latency monitoring capabilities all residing within an easy-to-use application for macOS and Windows. With all selections viewable in the centre of the routing matrix when hovering over a connection, colour-challenged users are also well catered for.

Superlative software integration apart, Antelope Audio also prides itself on its innovative hardware. Here Orion 32+ | Gen 3 far from disappoints. As Antelope Audio itself is renowned as the world’s premier practitioner of audio clocking, it is hardly surprising that this admirable attribute continues to make momentous musical waves with the company’s next-generation AFC technology and jitter management algorithm. A pair of Word Clock outputs (WC OUT) turn the Orion32+ | Gen 3 into a world-class master clock fit for any user’s studio setup, while a 10MHz input (10M IN) allows it to be used with supreme stability using Antelope Audio’s 10MX Rubidium Atomic Clock — itself really representing an epiphany of more than 20 years’ worth of expertise in the digital audio world, making analogue’s clarity, depth, width, and distinctly three-dimensional traits sound so vividly real.

Reality dictates, therefore, that Orion32+ | Gen 3 advances Antelope Audio’s hard-won reputation for pristine conversion quality, thanks to its brand-new AD/DA converters achieving up to 129 dB dynamic range (at the MONITOR output stage). Simply speaking, Orion32+ | Gen 3 allows anyone to hear the true sound of their music with both digital clarity and analogue warmth.

While consummate clocking and conversion are hallowed hallmarks of any Antelope Audio interface, it is the fact that Orion32+ | Gen 3 delivers true sub-millisecond round-trip latency for both AD and DA conversion that also distinguishes it from the (sound of the) crowd. Clearly the trailblazing pro audio manufacturer has some seriously-impressive figures with which to back up this impressive claim — figures that surely speak for themselves with round-trip latency times between line inputs and outputs being measured as low as 0.904ms (64 samples at 192kHz) and line inputs and monitoring outputs as low as 1.155ms (64 samples at 192kHz). Considering AD/DA conversion’s inherent latency and the technical state-of-theart in the pro audio industry, it is currently impossible to achieve sub-millisecond latency under each and every recording and playback scenario. Saying that, the latency achieved in those quoted measurement examples are low enough as to be practically imperceptible.

Interfacing is — by its very nature — all about connecting to the outside world. Within the confines of its single rack space-occupying rear panel, Orion32+| Gen 3 packs a lot of connectivity courtesy of 8x DB25 connectors for analogue I/O alongside 2x ADAT, 1x MADI, and 1x S/PDIF digital connections.

Clearly, then, Orion32+ | Gen 3 has what it takes to make momentous musical waves with its extensive connectivity; exemplary AD/DA; flawless clocking; intuitive control — from any computer on the same network, no less; real-time effects; and sub-millisecond latency… literally a fitting tribute to Antelope Audio’s continued commitment to trailblazing technology in the pro audio industry, if ever there was one!