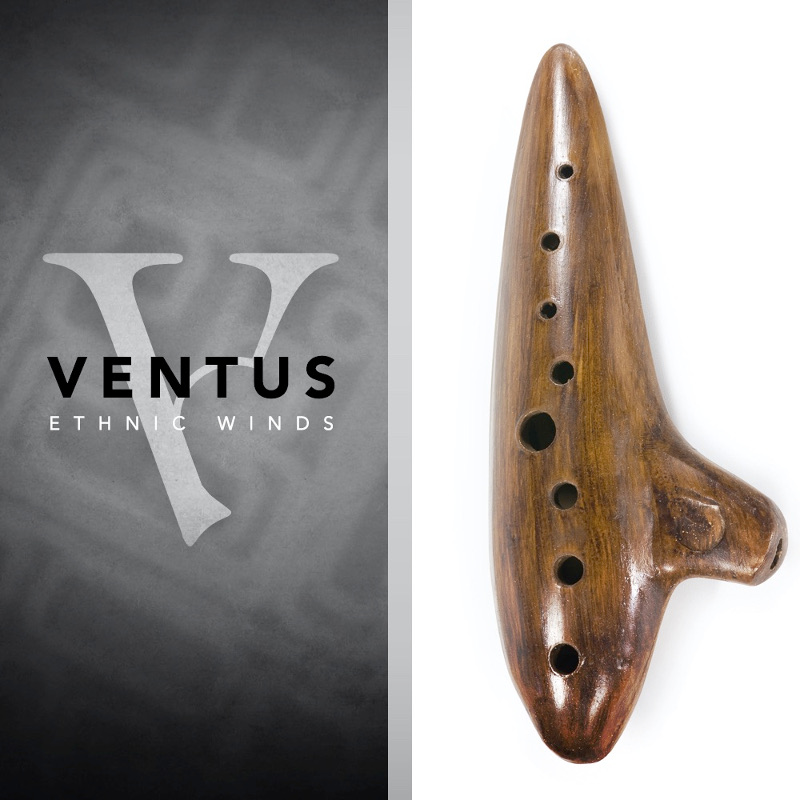 A typical dictionary definition of an ocarina is a small egg-shaped ceramic — especially terracotta — or metal wind instrument with holes for the fingers. While the word itself journeyed from Italy in the late 19th Century — from oca (goose) due to its waterbird-like shape, Costa Rican Pendant Ocarinas originate from the time of the Incas and were used as instruments for festivals, rituals, and ceremonies; they usually have eight or nine holes and are often shaped like animals — as evidenced by the toad-like one deeply sampled by Impact Soundworks for VENTUS ETHNIC WINDS – OCARINAS. Continuing to travel — truly in keeping with the VENTUS ETHNIC WINDS series’ design concept of transporting adventurous users on an exotic musical journey around the globe, capturing the tones of pleasingly performed solo instruments outside of the Western repertoire, the Triple Ocarina is a multi-chambered ocarina with a broad range of around two octaves plus a fifth, while the Chinese Xun is an ancient egg-shaped aerophone that dates back 7,000 years and was used primarily in the performance of palace music.

In the process of capturing those endearingly exotic instruments, Impact Soundworks explored the full range of playing techniques — tapping into the talents of New York-based composer, arranger, and saxophonist woodwind player par excellence Josh Plotner — to enable VENTUS ETHNIC WINDS – OCARINAS users to make musical KONTAKT in many more ways than one… from expressive sustains, vibrato, flutters, and accents, to staccato notes and bends, pitched release articulations, and special extended techniques. The instruments involved feature either 11 or 13 articulations paired with a combined total of over 900 phrases, performed in a variety of unique and inspiring styles and lengths. These can be used within the KONTAKT instrument itself, or loaded as WAVs (Waveform Audio files) in a DAW (Digital Audio Workstation) for further slicing, editing, and arrangement.

Versatility and additional ease of use comes courtesy of Impact Soundworks’ proprietary TACT (Total Articulation Control Technology) to unify and simplify the process of creating personal mapping setups for each and every instrument. Indeed, inclusion of some serious phrase playback editing scripting alongside two mic positions and a whole host of controls to tweak things further still, such as Impact Soundworks’ simple-to-use FX rack — replete with an analogue-modelled parametric EQ, COMPRESSOR, DELAY, and convolution REVERB — reassure that VENTUS ETHNIC WINDS – OCARINAS is a surefire source of infinite inspiration… just like its VENTUS ETHNIC WINDS series siblings that flew (off the sampling shelves) before it!