Pittsburgh pens love letter to the analogue monosynth with Microvolt 3900 desktop delight PITTSBURGH, PA, USA: having turned heads and opened ears at The 2018 NAMM Show last month in Anaheim, CA, electronic instruments-maker Pittsburgh Modular Synthesizers is proud to announce that it is taking preorders on its Microvolt 3900 — duly destined to delight desktop synthesizer supporters anywhere as a modern, semi-modular synthesizer inspired by the instruments designed by the company’s heroes, though taking a new approach to building a contemporary analogue monosynth with a host of innovative and unconventional features that makes it stand out from the sound of the crowd — as of February 14… 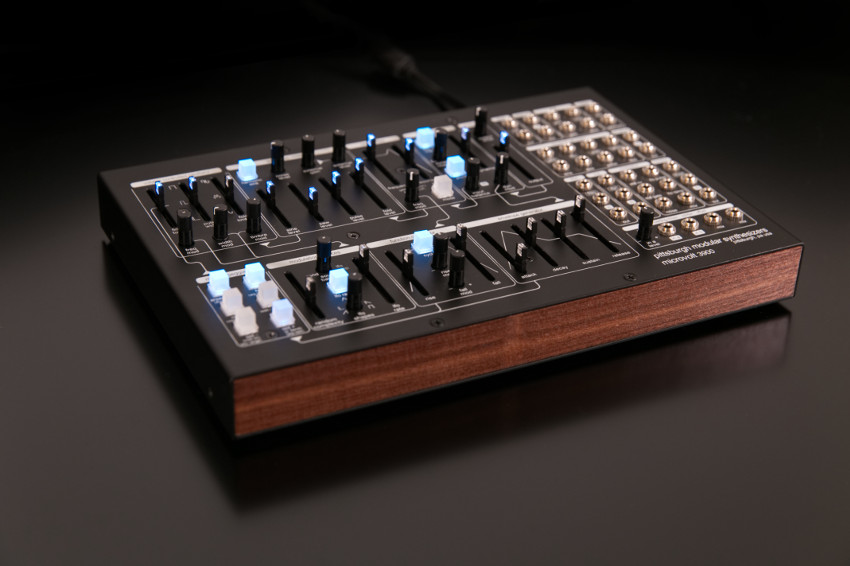 Thanks to Pittsburgh Modular Synthesizers’ new temperature-stabilised, dual-VCA (Voltage Controlled Amplifier) oscillator core, the analogue audio engine of the Microvolt 3900 feeds a set of timbral wave-shapers carefully crafted for deep harmonic shaping, allowing a layer of additive synthesis alongside the classic synthesis waveforms. Waveforms are fed into the binary filter, a custom state-variable filter architecture allowing for near-infinite resonance — with or without selfoscillation.
Sonically speaking, this creates a juicy, fluid filter, adding depth and energy to the oscillator that can capably scream on demand! Deeper still, Pittsburgh Modular Synthesizers’ new dynamic vca lies at the heart of the Microvolt 3900’s sound world. Whereas a standard VCA works in two dimensions, the dynamic vca technology adds a third dimension — duly welcomed. When the dynamic vca closes, decreasing the amplitude, harmonics are removed from the source; whereas when the dynamic vca opens, the harmonics are restored. Reality dictates that this mimics the behaviour of sounds in nature. Needless to say, the result is a lively, organic-sounding synthesizer, full of energy. The design of the dynamic vca also allows the instrument to be plucked or struck, so-to-speak, opening up another set of musically percussive possibilities.
Putting more sonic architecture into its intrepid users hands, the semi-modular Microvolt 3900 includes a 39-point Eurorack format-friendly 1/8-inch jack patchbay for complete signal routing control over a full complement of audio and modulation options with several self-explanatory sections clearly categorised: clock, external, midi, output, waveform generator, envelope, filter, vca, modulation, function, and inverting mixer / splitter / offset.

The Microvolt 3900 is scheduled to ship to Pittsburgh Modular Synthesizers’ growing global network of authorised dealers and resellers (https://pittsburghmodular.com/dealers) on April 27, 2018, when it will become available to purchase with an RRP of $629.00 USD.
For more in-depth information, please visit the dedicated Microvolt 3900 webpage here: https://pittsburghmodular.com/microvolt
Watch Pittsburgh Modular Synthesizers’ inviting introductory video for the Microvolt 3900 here: https://youtu.be/rJZAKcVsDAg