LONDON, UK: Spitfire Audio, purveyors of the finest virtual instruments from the finest musical samples in the world, is proud to announce availability of BML310 MURAL – SYMPHONIC STRINGS VOL. 3 — the third instalment in its award-winning range of evocatively-named symphonic strings virtual instrument modules for its BML (British Modular Library), a longterm project to create the greatest-sounding, deepest-sampled, and, ultimately, future-proofed living orchestral virtual instruments collection for Native Instruments’ industry-standard KONTAKT platform, based on ultra-detailed, next-generation recordings of the world’s finest musicians at London’s legendary AIR Studios — as of September 10… 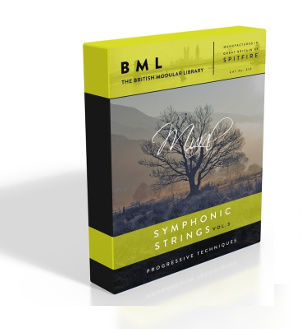 A typical dictionary definition of the word mural might read something along the lines of: a painting or other work of art executed directly on a wall. By their very nature, murals are often large. Likewise, BML310 MURAL – SYMPHONIC STRINGS VOL. 3 “…is 60 players, so the section sizes are 16 first violins, 14 seconds, 12 violas, 10 celli, and eight basses, recorded in Lyndhurst Hall, as are all of our BML range,” reveals Spitfire Audio Director Paul Thomson — also an active film composer himself — by way of a brief introduction before delving deeper: “These techniques in VOL. 3 are what we are terming ‘Progressive Techniques’ — a grab-bag of stuff that we like and have recorded before, but also some stuff that we’ve never recorded before. This includes some stuff like divisi [indicating that a section of players should be divided into two or more groups playing a different part] — by the desk, so half of the players playing normale, and half of the players playing con sord [with the use of a mute]. That is an amazing sound — something that is used quite a lot in film scores, but has not been sampled before. We’ve got basses playing both pizz [pizzicato — plucking the strings with a finger] and a brushed spiccato [bouncing the bow on the strings] together — again, split by the desk, which is a fantastic kind of warm, round, bass-y bottom end. And we’ve got our super sul tasto [bowing particular regions of the string], playing so far up the neck that the notes cease to exist — that was the brief! It’s a really incredible sound — very, very beautiful.”  By being performed and recorded in such a way as to provide users with such beauty and detail, BML310 MURAL – SYMPHONIC STRINGS VOL. 3 musically lives up to the design brief shared by its A-list music-maker-adopted BML308 MURAL – SYMPHONIC STRINGS VOL. 1 — voted ‘Best Sample Library Of 2014’ by Britain’s MusicTech Magazine — and BML309 MURAL – SYMPHONIC STRINGS VOL. 2 sample-based siblings: to encourage and inspire users to write better orchestral music, albeit by going ‘off-script’ with the likes of those totally new and fresh-sounding string-playing styles that very much highlight the incredible talent and appreciation of Spitfire Audio’s hand-picked group of world-class musicians.  More musical magic abounds above and beyond that world-class musicianship and also the first-rate recordings thereof. Thanks to award-winning producer/recording engineer extraordinaire Jake Jackson, BML310 MURAL – SYMPHONIC STRINGS VOL. 3’s long and winding road to typical Spitfire-styled, sample-based virtual instrumental glory was clearly in safe sonic hands, heading out from Lyndhurst Hall within London’s legendary AIR Studios, where much use was made of the finest ribbon mics available alongside Neve ‘AIR Montserrat’ preamps put through the world’s largest Neve 88R console onto a meticulously-maintained Studer two-inch tape machine — making BML the only orchestral sample library on the market to be firstly recorded to tape — before blossoming into stunning-sounding 24-bit/96kHz digital audio via high-end Prism Sound AD convertors, ready for scrupulous sampling and scripting.  Speaking of which, no fewer than 53,779 samples — some 92.5GB of uncompressed .WAV files — are at the musical core of BML310 MURAL – SYMPHONIC STRINGS VOL. 3! As hard won as those musically-scripted samples surely are, as active film composers themselves, Spitfire Audio’s founders favour virtual instruments that can be opened and played with little or no fuss, freeing the user to focus on the job at hand: making music. With that very thought in mind, the GUI (Graphical User Interface) includes an Overview Panel, providing a quick and easy way to access, view, and load the different articulations, mic mixes, and essential controller functions, all assignable to suit individual workflow, whereas the General Controls Panel represents a more extensive (yet still simple) GUI that allows the user to tweak general settings to suit, such as how many round robins they want and how they want them to behave, how they want memory to be organised, and assigning velocity, for example. Either way, musicality is the key to such sampling success, as always. And making a welcome musical return… The Ostinatum — quite simply a little inspiration machine worth fighting for! Not quite an arpeggiator, nor a sequencer, this intuitive GUI panel allows users to build up complex patterns that react to their playing — perfect for achieving unusual effects, such as tantalising ‘Zimmer-esque’ tension beds, and much more besides. It’s a knockout, as Paul Thomson knows only too well!  Upon playing the initial work-in-progress patches for BML310 MURAL – SYMPHONIC STRINGS VOL. 3, Paul Thomson ‘eloquently’ summed up what he heard thusly: “It’s a gigantic bag of totally new s**t!” Actions always speak louder than words, though, so why not apply some bold brush strokes to your music with BML310 MURAL – SYMPHONIC STRINGS VOL. 3? After all, all the players involved were recorded in situ and carefully mixed with the correct perspective and placing so that they lock together with each and every BML module as if they were all in the same room together. That way, when users start putting sections together it simply works — no mixing, panning, or careful manipulation of reverbs required when applying the ‘mural sound’ to any number of applications. Forget ‘Roll Over Beethoven’… roll over Hans Zimmer, more like!

BML310 MURAL – SYMPHONIC STRINGS VOL. 3 can be purchased and downloaded directly from Spitfire Audio for £399.00 GBP (subject to VAT within the EU) from here: http://www.spitfireaudio.com/products-page (Note that Spitfire Audio’s free Download Manager application for Mac or PC allows you to buy now and download anytime while a full version of Native Instruments KONTAKT 5 is needed to run BML310 MURAL – SYMPHONIC STRINGS VOL. 3.)