Martin
GRENOBLE, FRANCE: Auburn Sounds, setting itself up as a plug-in company committed to originality, reliability, simplicity, and sound, is proud to announce availability of LENS — let loose as a spectral dynamics processing plug-in par excellence, providing multi-band compression (without crossover phase shifts); constant phase EQ (without ringing); up to 64 crystal- clear companders (compressing source signals to reduce the dynamic range, and independently expanding them to save headroom and remove noise), all working together on a stereo signal; simultaneous control of sidechain and output EQ; nearby component masked information removal; and clean ‘over-the-top’ upwards multi-band compression — to provide profound punch and clarity since it achieves so much in constant phase, as of September 6… 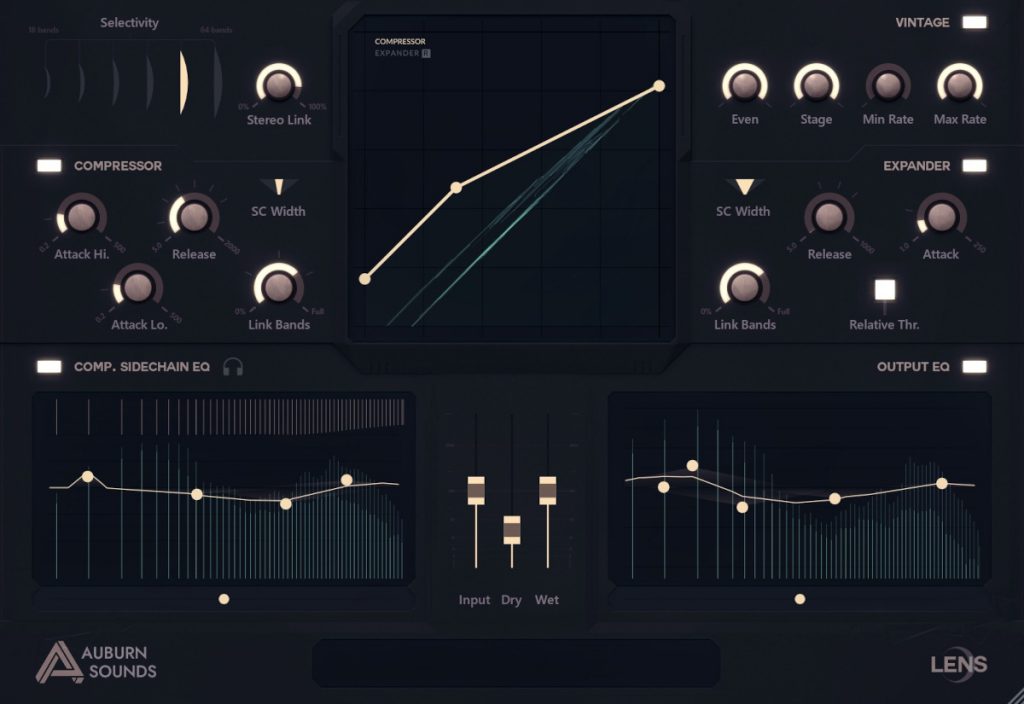 Amazingly, Auburn Sounds set out originally to design a mastering compressor as its latest plug-in prior to the prototype revealing itself as an adept tracking compressor, auto-EQ, noise-remover, upwards compressor, and multi-band expander/gate, providing profound punch and clarity as a spectral dynamics processing plug-in par excellence. Indeed, the ‘spherical’ nature of its sound steered the plug-in’s creator, CEO Guillaume Piolat, towards an appropriate name — namely, LENS.
LENS itself is designed around being spectral — hence the company concerned calling it a spectral dynamic processing plug-in. Put it this way: once a signal is in the spectral domain, compression, expansion, and EQ are all applied by LENS simultaneously with linear phase — property of a filter whereby the phase response of the filter is a linear function of frequency, resulting in all frequency components of the input signal being shifted in time (usually delayed) by the same constant amount (the slope of the linear function). Favouring simplicity in operation, LENS’ Selectivity section shows its available 18 bands (less selective) to 64 bands (more selective) reach, resulting in thinner phase-shift with possible high-end roll-off while offering little in the way of distinguishing between frequencies at lower settings and increasing phase-shift with a fuller, rounder sound while distinguishing between nearby frequencies at higher settings — albeit at considerable cost to the plug-in’s CPU (Central Processing Unit) usage when working at higher Selectivity settings. An adjacent (self-explanatory) Stereo Link control ranges between 0% to 100%.
Far from falling short in compression capability, all 64 of LENS’ compressors can be simultaneously manipulated from its COMPRESSOR panel, providing controls for Attack Hi. (High)— attack time of the compressor for high frequencies (at 20 kHz); Attack Lo. (Low) — attack time of the compressor for low frequencies (at 20 Hz); Release — release time of the compressor for both low and high frequencies; SC Width — adjusts the stereo width of the compressor sidechain signal; and Link Bands — continuously transitions between full-band and multi-band for the gain reduction stage.
Similarly, all 64 of LENS’ expanders can be simultaneously manipulated from its EXPANDER panel, providing controls for Attack — attack time of the expander for both low and high frequencies; Release — release time of the expander for both low and high frequencies; Relative Thr. (Threshold) — a specialised mode whereby the threshold of the expander is the average local energy, allowing for suppression of information masked by high-volume components in the same spectral frame, making the signal sound less ‘complex’; SC Width — adjusts the stereo width of the expander sidechain signal; and Link Bands — continuously transitions between full- band and multi-band for the gain reduction stage.
Sandwiched between those COMPRESSOR and EXPANDER panels to take ‘centre stage’ in the LENS GUI (Graphical User Interface) is its gain map, viewable in COMPRESSOR or EXPANDER modes; the former lets users adjust the threshold of the compressor (by dragging the middle point), compressor ratio (by dragging the rightmost point), and compressor make-up (by dragging the bottom-left point), while the latter lets users adjust the threshold of the expander (by dragging the middle point) and expander ratio (by dragging the bottom point). It is also possible to simply speed up that already speedy process by right-clicking the threshold point to simultaneously set the threshold and ratio in both viewing modes.
Meanwhile, the COMP. SIDECHAIN EQ panel displays compressor detection, and compressor gain reduction as a graph — albeit without taking into account the Input (output distortion stage), Dry (signal level added to form the LENS output), or Wet (signal — spectral, companded — that forms the LENS output when mixed with Dry) level sliders in the adjacent levels panel; while there is no EQ for the expander sidechain, Listen Mode can be activated to listen to the compressor sidechain.
Creativity continues with the OUTPUT EQ panel, displaying a view of the ‘Wet’ signal — after the compressor and expander is applied. As another graph, it accounts for Input and make-up levels but not Dry or Wet levels since it is not the actual ‘output’ signal but rather before the Dry signal is mixed.
It is worth noting here, however, that LENS offers extensive manipulations for its EQ bands — by double-clicking to add an EQ point, for instance, with many more options also available.
Bringing up the rear, though no less creative, clearly, LENS’ VINTAGE panel puts the following controls into anyone’s hands: Even — an output distortion stage; Stage — an input transformer distortion stage; plus Min Rate and Max Rate — to remove spectral bands, emulating old hardware or simply saving CPU usage.
Ultimately, then, anyone seeking profound punch and clarity from spectral dynamics processing should surely set their sights on Auburn Sounds’ LENS, the latest plug-in par excellence from a company committed to originality, reliability, simplicity, and sound, since it provides multi-band compression (without crossover phase shifts); constant phase EQ (without ringing); up to 64 crystal-clear companders, all working together on a stereo signal; simultaneous control of sidechain and output EQ; nearby component masked information removal; and clean ‘over-the-top’ upwards multi-band compression.
LENS is available to purchase at an attractive (time-limited) introductory promo price of only $49.35 USD (representing a 53% discount) until September 20, 2022 — rising thereafter to its regular price of $105.00 USD — in AAX, AU, LV2, VST2, and VST3 plug-in formats for macOS (10.12 or newer), Ubuntu (18.04 or newer), and Windows (7 or newer) with supported sampling rates ranging from 11,025 Hz to 192 kHz directly from Auburn Sounds, via its dedicated webpage, here: https://www.auburnsounds.com/products/Lens.html (Note that an alternative version of LENS — losing EXPANDER functionality — is also available to those seeking to taste some of its fanciful features for free.)
Watch Auburn Sounds’ eye- and ear-opening LENS introductory video here: https://youtu.be/z_F1uv_pzy8